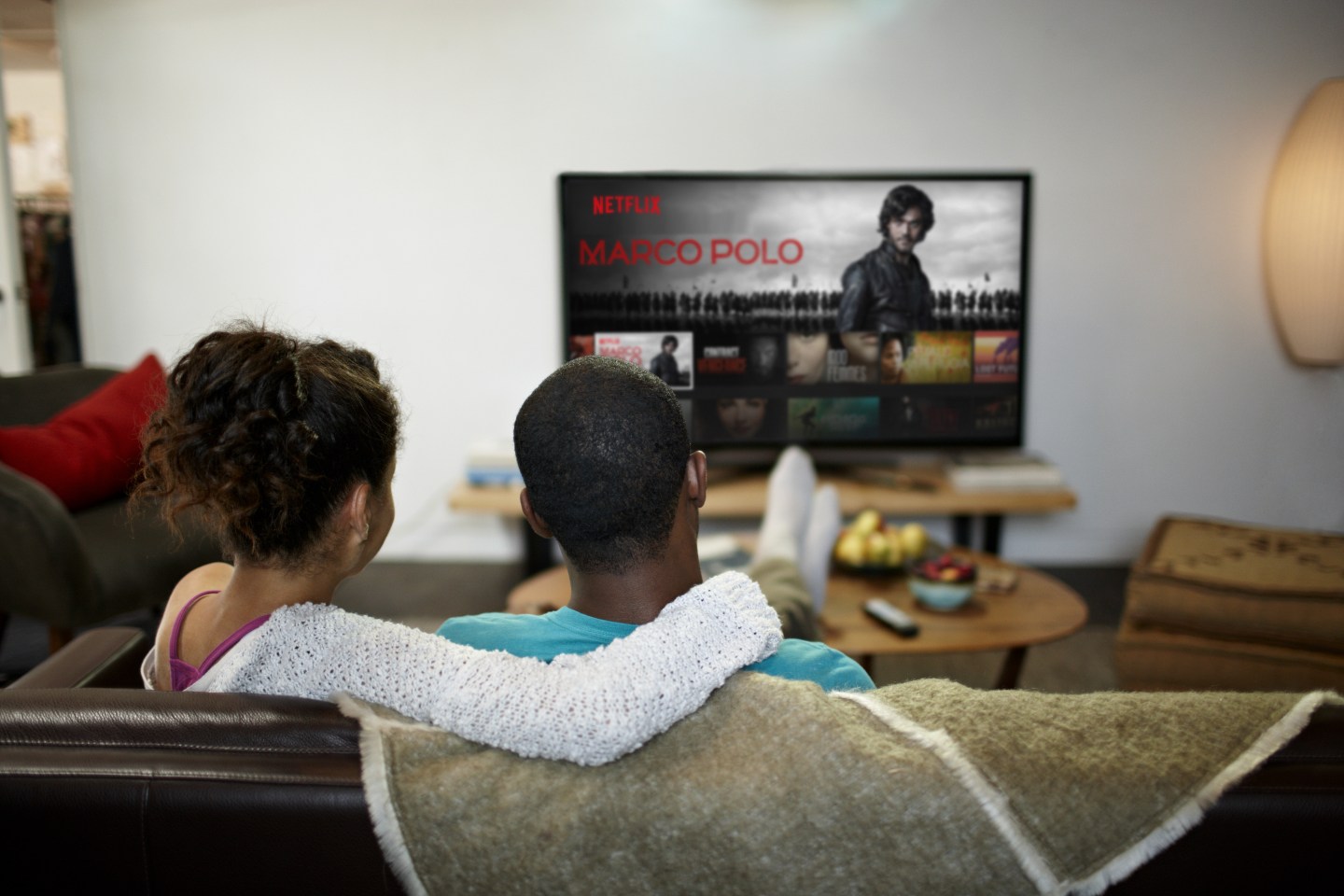 A media executive publicly denounced her own daughter for “stealing” last month. The crime? The 15-year-old has used a common technology to watch the U.S. version of Netflix instead of the Canadian one to which the family subscribed.

The “stealing” remark, which came during a speech about copyright issues, was seen by some as overblown. But it did underscore an important issue facing Netflix(NFLX) and other digital subscription services: large numbers of consumers, in search of new content, are jumping over the digital fences intended to preserve companies’ traditional country-by-country distribution models.

The result is a boom in cross-border viewing, which has become easier than ever thanks to cheap access to services such as virtual private networks (VPNs) that let customers hide their location. And in the case of Netflix, which is now in more than 50 countries, it raises the question of whether the company can or should do more to keep online customers locked into local internet borders?

Watch movies across the border: how it works

Netflix is wildly popular in Canada, and has been ever since the U.S. company opened shop there in 2010. The only catch for many Canadians is that the selection stinks compared to what their friends south of the border can get: Americans see hundreds of movies and TV shows, including Grey’s Anatomy and Burn Notice, that they do not. While Canadians see some shows that don’t appear on Netflix in the U.S., including Downton Abbey, these are relatively few.

This content shortage is why Canadians, and others with cross-border-Netflix envy, turn to services like “usnetflix.ca” that disguise their online location. By using these services, a subscriber in Vancouver may appear (from Netflix’s perspective) to be signing on from Seattle. Or a viewer in Australia may log-in via an internet address based in Boston. This simple trick prompts Netflix to fire up its U.S. roster of shows, including Grey’s Anatomy, in place of the more limited Canadian or Australian catalogue – meaning the viewer’s national subscription becomes an international one.

It’s important to point that this cross-border viewing is not really akin to “stealing” shows – despite what some media executives might say. That’s because the viewers in question are mostly paying customers of Netflix, and what they see is exactly what Netflix would show them if they happened to be traveling in another country. And though the digital fence-hopping is a violation of Netflix’s terms of service, it is questionable whether the practice is the same as outright piracy.

So how exactly do these people get access to international versions of Netflix in the first place? There are two popular technologies. The first is called a “VPN” (virtual private network), which creates a steady connection to Netflix from an out-of-country server. This is the same tool that people use to evade censorship in countries like China or that dissidents can use to hide their identify.

The second tool is a “smart DNS” server. This method likewise tells Netflix that you’re somewhere that you’re not – but only briefly, at the moment you sign on. Unlike a VPN, it doesn’t maintain a dedicated and encrypted connection. But that’s okay for someone who just wants to watch Netflix since it’s only the initial “authentication” moment that matters. Once you’re logged in, you’re “in” as far as Netflix is concerned.

According to Don Bowman, the CTO of network equipment maker Sandvine, both tools are common ways for Canadians to watch international Netflix, though DNS is more popular. All told he estimates that, in Canada, 30 percent of Netflix subscribers use one or the other method to watch U.S. Netflix.

This demand appears to be facilitated by sites like “usnetflix.ca” and “unblock.us,” which purport to offer easy access to location-disguising services for around $5 a month. Such sites are flourishing, even though some have earned a reputation for shady practices such as selling the bandwidth of their users to third parties.

Does Netflix know (and does it care)?

In January, certain corners of the internet went into panic over reports that Netflix was cracking down on VPN use. The news turned out to be overstated, but it did serve to raise the question of how much Netflix knows about, and possibly tolerates, its border-jumping customers.

“Whenever I’ve asked them about VPN’s, they always say the same thing – that it’s not a big issue, that it’s hard to nail down,” said Morgan Stanley analyst, Ben Swinburne, in a recent phone interview. He added that investors and Netflix are aware that “VPN’ing” goes on, but specific numbers are unclear.

From a technological perspective, however, experts say that Netflix could probably do more to shutdown the cross-border viewing.

“To be economical, they [the DNS or VPN provider] have to use commercial data centers … there’s not a way for them to hide,” said Bowman, the Sandvine CTO, explaining that Netflix can typically detect when certain internet traffic is coming from an internet address associated with a VPN or DNS provider. In response, the company could choose to block the incoming traffic.

According to Bowman, Netflix can’t block cross-border viewing entirely but it’s likely the company could put a “big dent” in it. He added that the company has made some effort to curb VPN and DNS use, in part through updates to its mobile apps.

As for Netflix, company spokesperson Anne Marie Squeo said the company is doing what it can, even as it expands in dozens of countries.

“We employ industry standard measures to prevent people from using VPN to access our service. That said, it’s an issue of haves and have nots –people who are willing to pay for a TV show or movie but don’t have access — that we hope to address by offering our content globally to audiences at the same time.”

Meanwhile, analyst Barton Crockett of FBR Capital claims Netflix has no incentive to allow cross-border viewing, saying by phone: “They are trying to identify these people and shut them off. The U.S. content is only supposed to be in the U.S.”

The behavior of Netflix’s roving subscribers is actually just a symptom of a larger issue confronting media owners: the territory-based approach to selling movie and TV rights is harder than ever to maintain in digital world. While selling DVDs on a country-by-country basis makes perfect sense, the role of borders is less obvious when it comes to the internet.

“Consumers don’t understand. They say, ‘why can’t I watch the shows I want in Netflix’,” said Sandvine’s Bowman. “It’s trying to apply the physical world in the digital world.”

This consumer confusion appears in part to explain Netflix’s recent push to obtain TV and movie rights on a global basis instead of country-by-country. For Netflix, a worldwide license is not just an efficient way to acquire content, but also results in a more consistent product experience for its customers.

“I think they absolutely want global rights. It’s a strategic advantage over their competitive set,” said Swinburne, the Morgan Stanley analyst. He also notes, however, that a demand for global rights poses a dilemma for content owners: should they embrace the convenience of one large paycheck from Netflix, or instead try to make more money by selling the rights in one territory at a time?

The issue of VPNs and smart DNS tools further complicates the issue, and could amount to a form of leverage for Netflix. The company could, in effect tell content owners: “see, viewers are going to get this content anyways, so you might as well give us the global license.”

Netflix does not, of course, concede it is doing this, but the outrage from the Canadian media executive – who made the “stealing” comment about her own daughter – suggests that cross-border viewing is already causing friction between Netflix, its competitors and content owners. Seen in this light, the 15-year-old’s Netflix viewing doesn’t represent a moral problem, but a familiar business one.