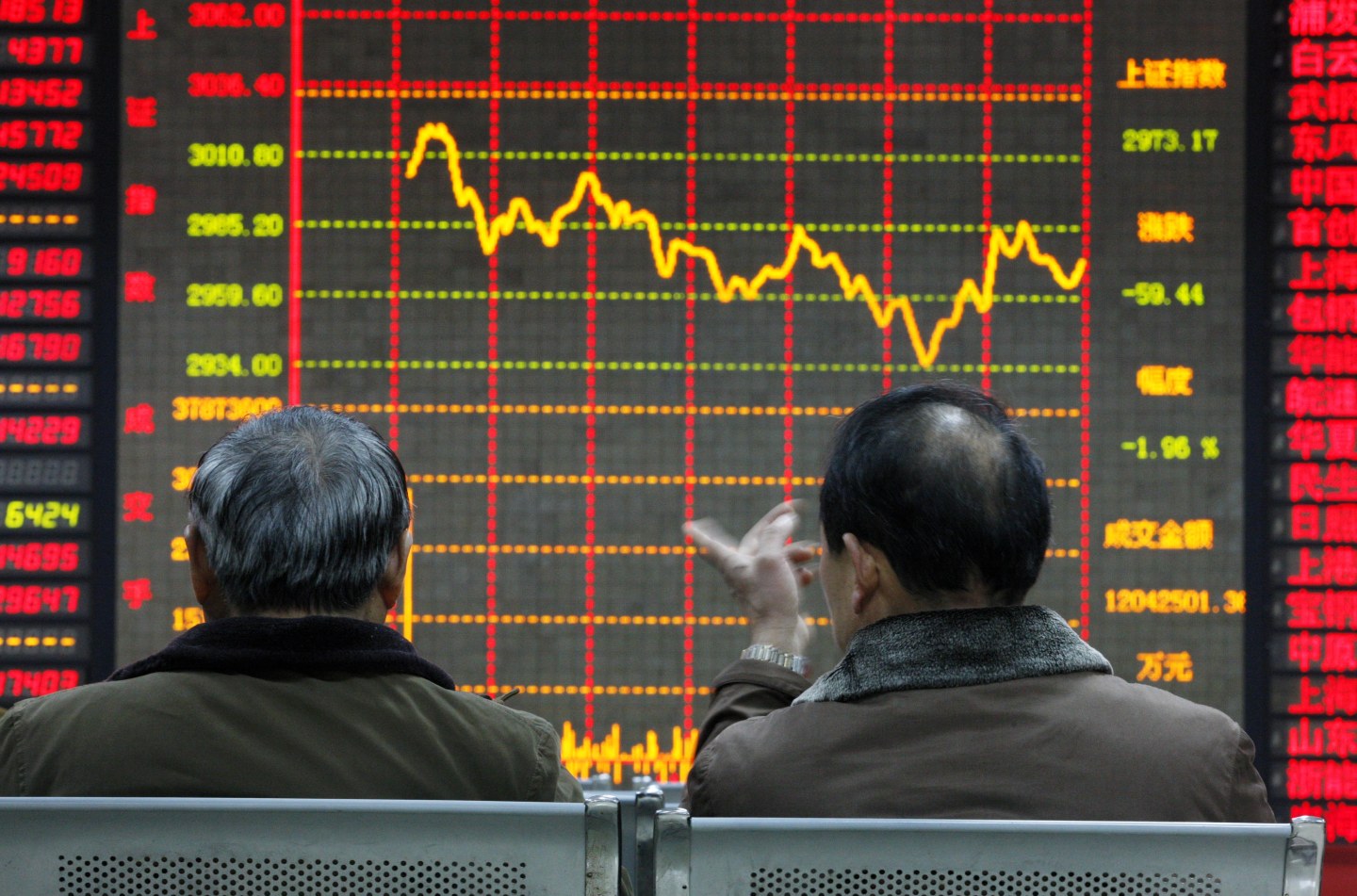 Two Chinese investors talk as they look at prices of shares and the Shanghai Composite Index at a stock brokerage house in Huaibei city, east China's Anhui province, 24 December 2014. China's stocks tumbled for a second day on Wednesday (24 December 2014), the biggest two-day loss since June 2013, amid speculation the government is taking measures to cool the world's best-performing major stock market over the past month. The Shanghai Composite Index fell 2 percent to 2,972.53 at the close, after plunging 3 percent yesterday. The securities regulator this month cautioned investors on buying shares and started inspecting some brokerages' margin finance businesses. A 17 percent rally since end-November, spurred by policy easing speculation and leverage, has driven valuations to three-year highs as technical indicators signaled overbought conditions.
Photograph by Xie zhengyi — Imaginechina/AP

Here’s a math quiz. Which number is larger: $350 billion? Or $3 trillion? The first is Greece’s total debt. The second is wealth that has evaporated from the Chinese stock market in the last month. The difference suggests we are paying too much attention to the wrong thing.

The Shanghai and Shenzen exchanges continued their rout Tuesday, despite heroic efforts to stop them. IPOs have been shut down, short-selling has been banned, more than 700 shares – about a quarter of the market – have been suspended from trading, and, oh yes, a government-backed fund is buying billions of dollars worth of stock.

The parallel here is not recent experience, but 1929. In the year before June 12, prices on the Shanghai exchange rose 150%, driven by a surge of new traders – 18 million brokerage accounts were created since the first of the year, more than in the previous four years combined – and a bulge of debt – margin credit roughly quintupled over the preceding year. Now the inevitable bubble is popping.

Should we care? Maybe not: the Chinese market is largely independent from the rest of the world. But as 1929 reminds, wild swings in markets can have severe economic and political consequences.

In the meantime, attacks on China are becoming increasingly heated in the U.S. political debate. Hillary Clinton joined yesterday, saying China is “trying to hack into everything that doesn’t move in America – stealing commercial secrets, blueprints from defense contractors, stealing huge amounts of government information, all looking for advantage.”

For the Chinese government, rising economic insecurity on the inside combined with heated attacks from the outside make for a volatile mix.