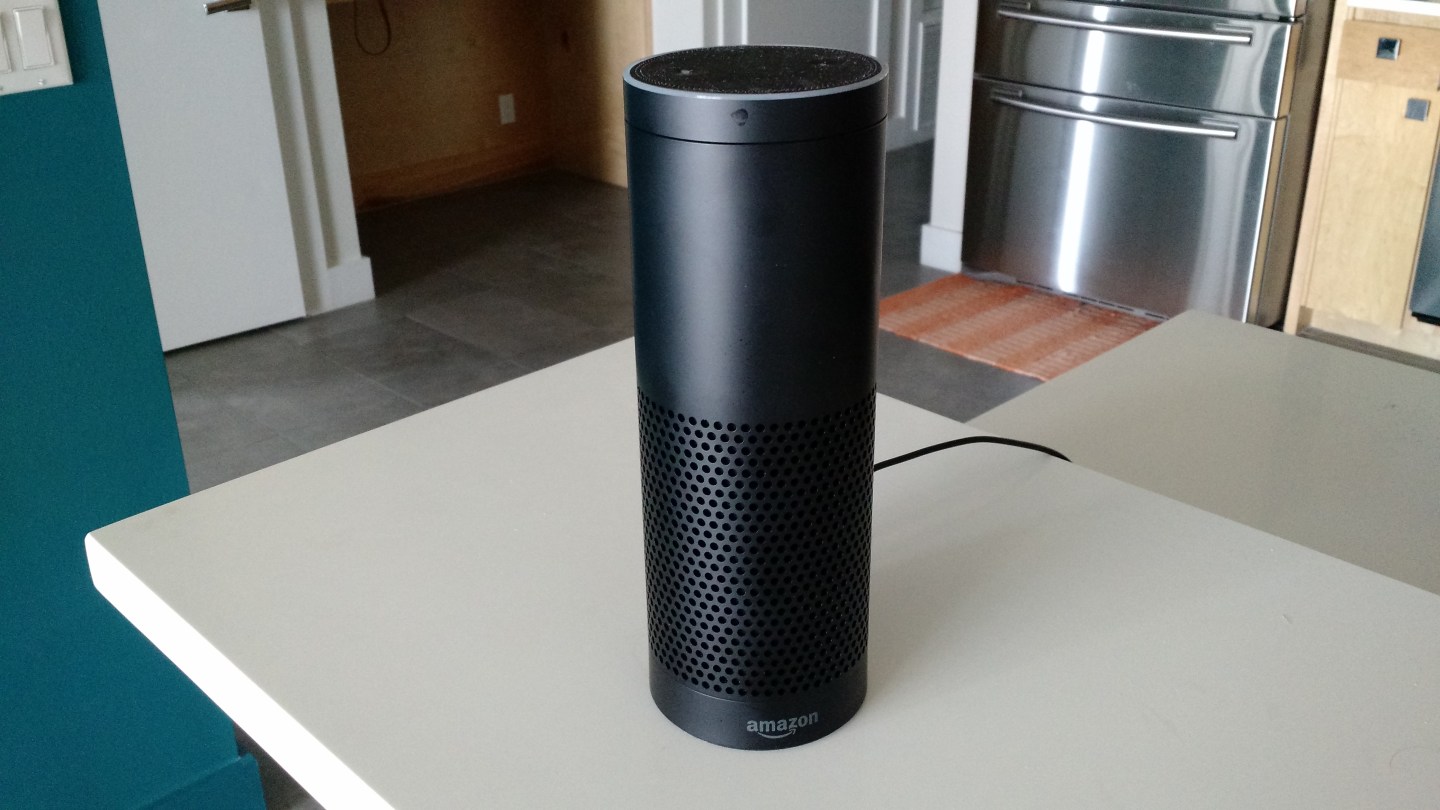 Amazon has just outmaneuvered Apple when it comes to the smart home.

The e-commerce giant last week announced the general availability of its Echo device that lets people talk to a speaker the size of a Pringles can to control their connected home gadgets and get answers to questions they might ask. Two days later it said it would share the technology that lets the product recognize what people are saying, created a $100 million fund to support companies using the Echo’s technology and said it would make it easier for developers to make devices like appliances and cars work with the Echo.

In talking to developers working with the Echo, I realized that Amazon just created the home automation device that Apple should have when it said it would create a software framework called HomeKit to let connected locks, lights and other gear in the home work together. I also realized that voice recognition technology is now robust enough to become the essential user interface for the Internet of things.

HomeKit as a savior?

One of the biggest problems with the smart home today is that it’s expensive and complex. People may dream of an intuitive home where devices work together to have your air on, your lights on and music playing when you walk in the door from a long day at work. But the reality is today, consumers buy one-off devices controlled by an app on their smart phone. This leads to what homeowners call “the basket of remotes” problem, whereby they may have to use a dozen different apps to control a dozen devices.

Tech savvy people might try to solve that problem by using a web service such as If This Then That, which can tie two devices together. Or they might instead use a hub, which is like an electronic brain for their home to cobble their devices together. But that process is terribly complicated. According to research from Icontrol, a little over a third of people plan to buy a connected device for their home in the next 12 months. But most consumers—57%—are skeptical about the technology for fear of “too many bugs.”

The industry knows it has a problem. That’s why in June 2014 when Apple announced HomeKit, people were thrilled. Leaked information detailed Apple’s plans to connect sensors and home appliances securely and easily, and how those devices could then be controlled by Siri.

Yet, more than a year later, HomeKit devices are rare, with just four products approved. Initial reviews of HomeKit-enabled devices say that the system doesn’t work well with Siri. Yes, Apple is right in pushing voice as a way to control devices for the home. But Apple’s efforts need more work. In building HomeKit Apple tackled the underlying technological issues first instead of focusing on how people will interact with it.

What’s that again? The Echo?

Meanwhile, Amazon’s Echo team started with the challenge of interacting with the smart home and built a product that could handle voice recognition and understand what users want to do.

In doing this, the Amazon Echo may be to the smart home what the iPhone was to smartphones — something that sets the standard for how we interact with a new category of products. In the case of the iPhone, the breakthrough was the touchscreen that freed us from the physical keyboard. In the case of the Echo, it is voice that will free us from our smartphones.

The Echo is a 9-inch tall cylinder packed with microphones and a speaker. It answers your questions, plays music, controls lights in your house, access your schedule and read audio books. You tell it what to do, and if it is linked up to the device or service, the device does it.

And with access to the voice technology, plus a $100 million fund to invest in startups that will promote the use of voice in the connected home, Amazon is building out the equivalent of the app ecosystem for the Echo. The first of those efforts should appear on the market soon, and consumers will see an array of devices that they can control with their Echo.

“At the end of the day it’s about user experience,” said Dan Roberts, founder and CEO of Scout Alarm, which is working with Amazon to integrate its home alarm system into the Echo platform. “We’re removing a barrier so instead of having to pull your phone out of your pocket you just talk to Alexa.”

Roberts isn’t worried that customers will spend less time with the Scout alarm app, because his concern is about getting consumers to buy the hardware and to use it. He concedes that people will have to open the app to tinker with the settings, but when it comes to figuring out if your door is locked, you can just ask Alexa.

That same commitment to the user experience drove Santiago Merea, founder and CEO of kitchen gadget company, The Orange Chef, to get involved. But Merea also offers up a sense of Amazon’s reasons for pushing the Echo into the home. He explained that Amazon, which has invested in The Orange Chef through its Alexa fund, has long been in in touch with his startup because its connected kitchen devices sell well on the site.

The Orange Chef sells a connected scale and has recently announced that it will make a device that works with blenders and crock pots that can recommend foods based on the owner’s activity or preferences (it monitors physical activity through a partnership with Jawbone that links the kitchen appliances to an activity tracker). People who have their Jawbone linked to their Echo might come in after a run, spot some bananas on their counter and ask Alexa, “What can I make using bananas and the blender?”

“People are making millions of decisions in the kitchen, and if there is an engine in the background helping you make decisions that’s very appealing,” Merea says. “For us we’re not just excited about working with Echo, but there’s Amazon Fresh [Amazon’s grocery service] and other stuff.”

Amazon’s decision to open up the ecosystem may be a positive for the e-commerce company, but it’s also an opportunity for companies large and small. Scott Miller, the CEO of Dragon Innovation, which advises startups on how to manufacture hardware, pointed out that not only do companies working with Amazon’s Alexa integrations get access to the voice recognition, but they also learn how to build better hardware for listening to users’s voice commands.

When it comes to building a high-quality and compact device that can listen as well as the Echo does, Miller said “Most startups wouldn’t have the expertise, and with Amazon’s program they get it for free.”

It’s not just the startups that benefit. Another company using access to Alexa is Octoblu, a division of enterprise software vendor Citrix. Amazon contacted the company after the Citrix CEO Mark Templeton met Amazon executives and told them how Octoblu engineers had built their own software to control the Echo. The Octoblu engineers used the Echo to control an internet connected Nest thermostat and even open the doors on a Tesla.

Now, with official support, Octoblu engineers are building voice commands in the Echo so office workers can tell Alexa to open a conference call or tell workers what’s on their calendar. Citrix is also working with Fortune 500 customers to link their offices and services to the Echo. For example, one client rents temporary residential apartments for executives, and has outfitted its apartments with Echo devices as a way to help guests learn how to operate the connected appliances in the apartment.

Chris Matthieu, director of IoT engineering at Citrix, said that the customer has used Octoblu’s software that can connect devices and services together, to set up the Echo to greet people when they enter the apartment. People staying there can also ask how to communicate with the Echo to control lights and other connected devices. “That’s a much easier and more intuitive way to communicate.” said Matthieu.

He’s already using the Echo to dial into conference calls and send reminders to people who are attending using a voice command. So it’s not just consumers with smart homes that stand to win here. As The Orange Chef’s Merea explains, “Voice is as frictionless as you can get.”

In recognizing that and building both an ecosystem and a high quality voice recognition device Amazon has beat Apple to the punch when it comes to the Internet of Things.