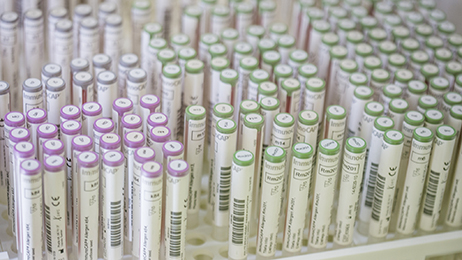 HealthTap, a startup enabling patients and doctors to connect via the Internet for consultations and care, is adding a significant weapon to the arsenal it already provides its physicians: lab tests.

The Palo Alto, Calif.-based startup is partnering with Quest Diagnostics (DGX), one of the largest networks of medical lab test providers in the U.S. Through the partnership, announced Tuesday, HealthTap’s physicians will be able to directly prescribe any lab test offered by Quest to patients. The patients can then schedule at the location and time that best fits their needs. The test results will also be automatically sent to the doctor for review, as well as to the patient. Quest will invoice the patient’s health insurance provider.

Founded in 2010, HealthTap now works with more than 71,000 licensed physicians in the U.S., and lets patients connect with doctors via desktop computers or mobile devices 24 hours a day. HealthTap offers both a community and network of doctors patients can turn to to ask questions about symptoms or concerns for a monthly fee, and a service that lets them remotely connect with their own doctors for a pay-per-visit fee.

So far, doctors have been able to provide consultations as well as prescribe medicine remotely to patients. Now, it will have access to Quest’s 2,200 patient service centers. Quest Dignostics, ranking at No. 375 on this year’s Fortune 500 list, brought in more than $7.4 billion in revenue last year.

“70% of medical decisions involve a medical test,” HealthTap chief health officer Dr. Jay Wohlgemuth told Fortune, citing a statistic found in reports by Quest and others in the field. Wohlgemuth was previously a senior vice president at Quest.

Wohlgemuth added that along with tests prescribed as a result of patient symptoms, tests can also help in the prevention of a large number of medical problems. Screening tests can help better manage and anticipate cardiovascular risk and infectious diseases, among many other areas. However, only about 30-40% of these tests are ordered and administered, Wohlgemuth said.

To help with that, HealthTap’s system will prompt users with recommended tests and areas of concern based on the patient profile they complete when they sign up for HealthTap.

In the telemedicine space, HealthTap competes with Doctor On Demand, Teladoc, and MDLIVe, among others.

(An earlier version incorrectly stated HealthTap’s total funding. The story has been updated with the correct amount.)