Boeing’s new CEO has some tough decisions to make 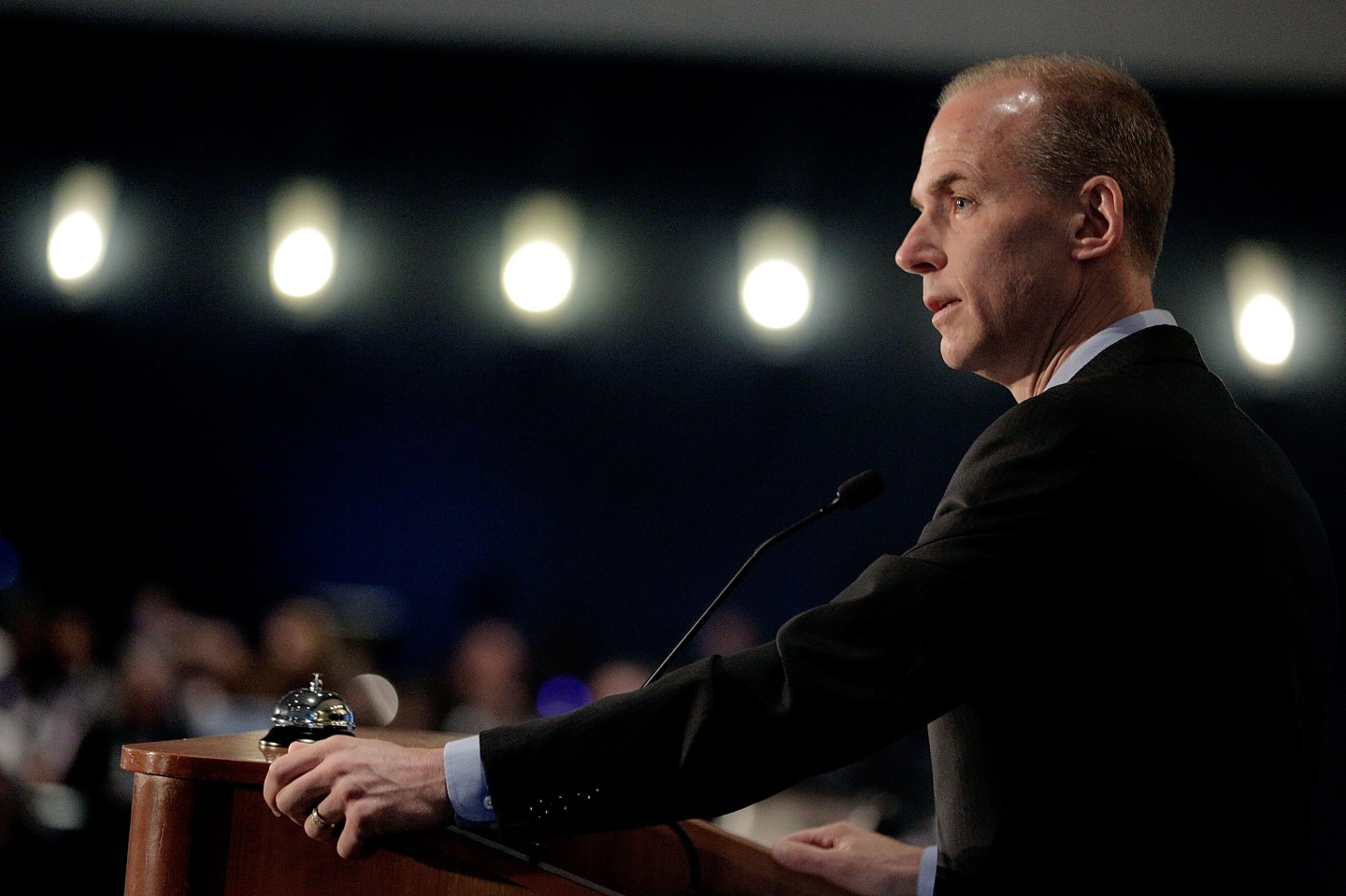 WASHINGTON, DC - APRIL 03: Dennis Muilenburg, president and chief operating officer of Boeing, speaks at the U.S. Chamber of Commerce Foundation Aviation Summit on April 3, 2014 in Washington, DC. Speakers at the summit touched on cost and technology challenges facing the industry and some of the opportunities available as potential solutions. (Photo by T.J. Kirkpatrick/Getty Images)
Photograph by T.J. Kirkpatrick — Getty Images

Boeing (BA) president and COO Dennis Muilenburg will step into the CEO role vacated by Jim McNerney on July 1. The change in leadership comes at a time when the company faces a laundry list of key near- and medium-term decisions, and both Boeing—and chief rival Airbus (EADSY)— enjoy multi-year backlogs for their commercial jetliners.

On the new CEO’s desk: What to do with a defense unit that’s losing ground in a tough federal budget environment; whether or not to cancel one iconic commercial jet line and/or inaugurate a new one; how to deal with the fallout from this summer’s $55 billion Long Range Strike Bomber decision; and, how the company should effectively ramp up commercial jet production to meet historic levels of global demand.

The 51-year-old Muilenburg hails from Boeing’s defense and space unit, and his selection signals something of a culture change for the company’s executive leadership. McNerney, who previously held executive positions at 3M and General Electric Co., is known as more of a finance geek. Meanwhile, his replacement is an aircraft engineer and 30-year Boeing veteran with a deep knowledge of the defense industry’s inner workings.

“McNerney is a numbers guy, it was all about money and a vision for financial success, and he was not an aircraft person by any stretch of the imagination,” says Richard Aboulafia, vice president for analysis at aerospace and defense consultancy Teal Group. “Muilenburg is quite respected in the aircraft world, he comes from that background. He’s an engineer, not an accountant. I would imagine there will be very big changes unless the system changes the person.”

Muilenburg won’t have the luxury of choosing the timing of some of those changes, as several decision points are coming his way in the relatively near-term. How he deals with these decisions will impact not only Boeing, but also the $60 billion businesses’ foreseeable future.

On the commercial side, Muilenburg inherits plans to ramp up production of its popular 737 and 787 aircraft, transition the company’s existing 777 line toward production of an updated model known as 777X, and potentially launch an all-new, mid-size jet marketed at the space previously served by Boeing’s out-of-production 757 jetliner. What he won’t inherit, however, is a blueprint for exactly how to do these things.

The decision to design a brand new aircraft for the mid-size market could end up costing Boeing $10 billion in development costs. Muilenburg will also have to choose how much to scale back production of the current 777—one of the company’s more profitable models—in anticipation of increasing 777X production in the next decade, another move that could hurt Boeing’s near-term bottom line.

RBC Capital Markets analyst Rob Stallard wrote in a note to investors that shareholders could receive these decisions poorly, at least in the near-term. “But longer term they are arguably the calls that need to be made,” he writes, “and in our view could be healthier for Boeing’s longer-term growth and success.”

Boeing is also nearing a point in time where it will have to decide whether or not to further cut back on production of its hulking 747-8 model, or even retire it altogether in the face of slow orders. Last Wednesday, the company announced it would further cut production to just one aircraft per month (from 1.3 per month previously) starting next year. Jason Gursky, a senior analyst at Citigroup Global Markets, noted in a June research report that the “risk remains that the line will need to close by the end of the decade.” Ultimately, Muilenburg will have to make that call in the end.

Ramping up production on the 737 and 787 will also put increased strain on Boeing’s suppliers and manufacturing workforce, with whom relations are already frayed. Over the past decade, Boeing has been accused of leaning unfairly on its manufacturing employees and contractors as well as its suppliers in an effort to trim costs and make up for losses associated with the 787 Dreamliner development program.

Regardless of perceived rightness and wrongness in those cases, how Muilenburg chooses to address those workforce and supplier tensions is extremely important if Boeing is going to successfully ramp up production and potentially launch a new aircraft model.

Any hiccup with suppliers or with Boeing’s own workers could turn into a major problem for a production team running at such a high level. Slippage in quality of parts or unforeseen problems with new subsystems on the 777X or a potential 757 replacement—or the resurfacing of old problems like the battery issues that plagued early 787s—could also create costly headaches.

Boeing builds a number of legacy military aircraft that are nearing the end of their lives, including the Navy’s F/A-18 Super Hornet flown by the Navy and the C-17 airlifter. It now faces a situation in which some of its older production lines are closing and new business isn’t materializing to take its place. Looking forward, a $55 billion contract for the U.S. Air Force’s Long Range Strike Bomber is the only major Pentagon combat jet program up for grabs in the next several years.

With its role as a combat jet maker diminishing, its defense unit might have to make serious structural changes, especially if Boeing loses the bomber program to rival Northrop Grumman (NOC). In order to maintain its standing in the defense industry, the company could also choose to bulk up on new production contracts through acquisition.

Though Boeing declined to comment on the matter, the company could choose to pursue a reported $10 billion takeover of Sikorsky Aircraft Corporation, once its parent company United Technologies Corp, (UTX) finishes offloading the helicopter maker later this year. It could also bounce back from losing the new bomber contract by simply acquiring the winner, should the much smaller Northrop Grumman prevail.

Regardless of what Boeing does to revitalize its defense unit, it will have to do something. And with a decision on the new Long-Range Strike Bomber expected within weeks, one of Muilenburg’s first big decisions may focus on how to spend money rather than how to make it.

“There are a large number of legacy platforms winding down,” Aboulafia says of the issues facing Boeing’s defense unit as Muilenburg takes the helm. “So you can take action to extend their life, try to promote exports to foreign customers, or you can look at acquisitions. Acquisitions might be high on his list of action items.”

Correction, June 25, 2015: An earlier version of this article misstated the new production rate of Boeing’s 747-8. It is one per month.