Meet the MIT brainiac who decides just how smart Apple is 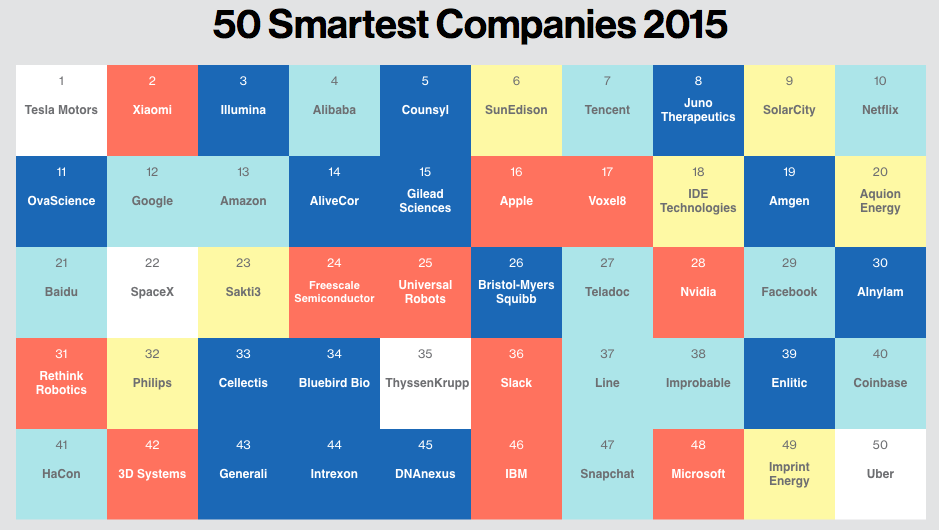 The MIT Technology Review released its 50 Smartest Companies of 2015 today and Apple made the cut.

It’s right there at No. 16, a few IQ points after Google and Amazon and well ahead of Facebook, Snapchat and Uber.

What’s surprising is that last year, for the first time, Apple didn’t make the cut.

Intelligence in an enterprise seems like a quality that ought persists on a time scale longer than 12 months. How can a company be so smart one year and not the other?

I put the question to Brian Bergstein, the executive editor who assembled last year’s list—the one that dropped Apple.

“We used to call it ‘most innovative,'” he explained. “But innovative is such an irritating word. Everything is an innovation. ‘Smart’ is more interesting. Smart better captures who is seeing the tech landscape as a whole and forcing everyone else to adapt to them.”

The sense of the room last year, he says, was that Apple was resting on its laurels.

“Apple is always the obvious choice. So every year we look to justify how we can keep it on the list. Our arbitrary rule is that we want to see something definitive, some tangible innovation that we can point to.”

A pair of massively popular smartphones, a couple of operating systems, a new programming language and most of the components of Apple Pay.

Nope. Not much you can point to there.