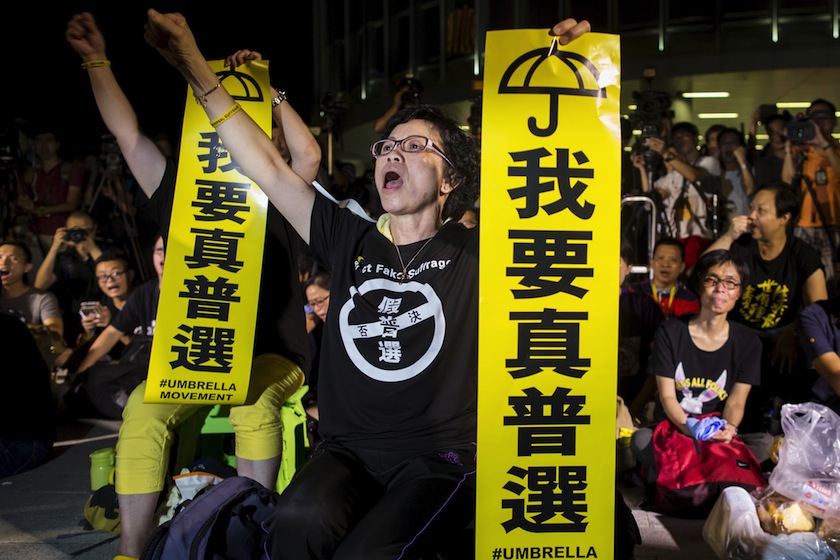 Pro-democracy protesters shout while holding banners which read "I want real universal suffrage" during a demonstration outside Legislative Council in Hong Kong, China June 17, 2015. Hong Kong's pro-democracy lawmakers appeared to be standing firm on Wednesday in their pledge to veto Beijing-backed electoral reforms, as the Asian financial centre's legislature debated the package that will define its democratic future. REUTERS/Tyrone Siu - RTX1GWBP
Photograph by Tyrone Siu—Reuters

Those who have dealt with the Chinese Communist Party (CCP) know that China’s rulers usually get their way and, when they don’t, seldom give up. So after the pro-democracy legislators in Hong Kong’s Legislative Council (Legco) voted down Beijing’s proposal to replace the former British colony’s undemocratic electoral system with another equally undemocratic version, the only thing we should expect is that this is not the end of the story.

In August 2014, the Chinese government announced that Hong Kong’s next chief executive would be popularly elected, but the candidates would need to be vetted by a special committee consisting mostly of pro-Beijing elements. Currently, the chief executive is elected by a committee of 1,200 local notables. In the eyes of Hong Kong’s citizens, the existing system is designed to produce a government beholden to Beijing, not the people of Hong Kong. Since the Chinese government has formally pledged to institute “universal suffrage,” many Hong Kong residents viewed Beijing’s new electoral plan as reneging its promise. Unable to pressure Beijing directly, protesters in Hong Kong staged street demonstrations that shut down the busiest parts of the city in October and November.

After the confrontations ended peacefully last December, all eyes turned to the next round of the fight—the passage of the proposed electoral plan by Hong Kong’s Legco. For the plan to pass, it needed support of at least four pro-democracy legislators. Despite months of cajoling, Beijing was unable to turn a single one of those officials.

Chinese leaders are unlikely to take this setback passively. They will not contemplate any concessions, such as proposing a more democratic alternative, because it might be seen as capitulation. Instead, they will try to score a victory that will repair their “lost face” and show they have regained the upper hand. In the short-term, the easiest measure is a public relations offensive to paint Hong Kong’s pro-democracy forces as unpatriotic ingrates who have thrown away a valuable opportunity to improve its governance system. Efforts to tarnish the image of Hong Kong’s pro-democracy forces could even target individual legislators. A few years ago, a pro-democracy legislator was arrested in Guangdong for “patronizing” a prostitute. When Legco elections are held in September 2016, such smear tactics might be used to undermine legislators who have defied Beijing’s will.

Hardliners in Beijing may be tempted to punish Hong Kong economically by, for instance, sending fewer mainland tourists or routing more trade and other commercial deals away from Hong Kong. But such steps are costly and thus unlikely. What Beijing prizes most is stability. Squeezing Hong Kong economically could backfire as the city’s residents blame Beijing and its surrogate government for their economic misfortune. And since the economies of Hong Kong and the mainland are closely integrated, it is impossible to punish Hong Kong without hurting the mainland as well.

Not teaching Hong Kong a lesson is equally unattractive. Chinese leaders are determined to reassert their authority after suffering a rare humiliating loss in Hong Kong. As one option, they may pass the National Security Law—which aims to curtail political organization and dissent. Beijing had to table consideration of the law in 2003 after half a million people in Hong Kong marched in protest. To be sure, forcing this controversial legislation through the Legco, while doable, carries huge risks. This can bring hundreds of thousands of protesters into the streets again. However, if Beijing toughs this storm out, many would see this as a decisive victory in which the CCP finally establishes its unquestioned authority in the rebellious former British colony.

The pro-democracy forces will be largely on the defensive in the upcoming battle. In responding to Beijing’s offensives, they will rely mainly on Hong Kong’s independent judiciary and public opinion for protection. But they are not totally powerless. In the short-term, their top priority is to force the administration of Leung Chung-ying, Hong Kong’s incumbent chief executive, to deliver real plans that address the city’s serious economic and social problems, such as rising housing costs, soaring inequality, and the lack of a social safety net.

Leung’s failure to demonstrate his competence and leadership will weaken Beijing’s case and broaden the support for democracy in Hong Kong. Most importantly, the pro-democracy forces must win enough seats in the Legco in next year’s elections to show that their cause is alive and well.

In this battle of David vs. Goliath, there is little question who the international community wishes to win. But in the real world, we must realize that Davids do not always prevail.