AT&T CEO: “Half of our mobile network traffic is video” 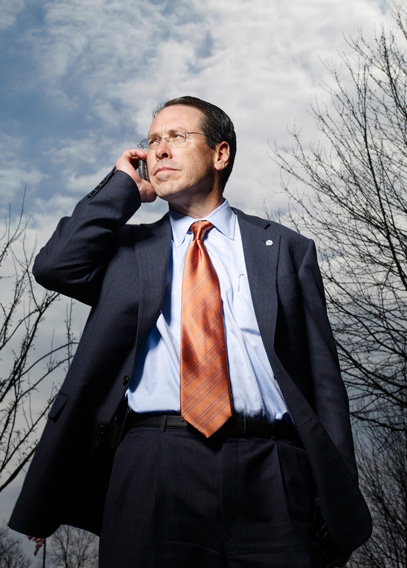 What’s the most exciting thing happening in your industry right now?

You’re going to find this horribly boring, but it’s this concept called software-defined networking. You’re managing a massive global network the way you’d manage a cloud-based data center. It’s a little geekish, and only the white-socks guys and knuckle-draggers in the industry appreciate it, but it’s actually going to change how businesses operate. It’s hard to help the general businessman understand this concept.

Right. It allows you to use cheap networking hardware instead of proprietary machines. Why is this technology so important to you?

I’ll give you an example. This year’s Masters Golf Tournament came at an interesting moment in time. Over that weekend Apple (AAPL) released an iOS update to all of its users, the Masters was streaming over the Internet, and there was the debut of Game of Thrones. All of this was coming across the same peering point [where Internet networks connect] in our various networks, and the end customer had a miserable experience. In a software-defined network, we could have redistributed and managed that capacity in real time.

If you look at our core network, since 2007 the volume that we’re hauling by virtue of smartphones and video is up 100,000%. And we’re looking out to 2020, and engineering and designing to accommodate another 10X growth in volume across the network. You’re seeing this kind of mismatch playing out that has tormented us. Capacity and performance are scaling according to Moore’s law, but networks around the globe are not.

Why should other businesses care about this technology?

Security is a big one. You’re a bank, and you’re standing up new branches; you’re a retail company, and you’re expanding. The ability to stand up and provision services in hours and not a month and a half is a big deal. The ability to monitor your service on the fly as it suits your needs—it’s going to change how businesses operate.

Let’s switch gears. Verizon (VZ) is paying $4.4 billion to acquire AOL (AOL). Tell me, how should people understand this deal?

Am I on the record?

What this deal is reinforcing to people is that video, mobile video, is the real deal. Right? And over-the-top video [nonproprietary Internet video] is the wave of the future. And the way people will consume video is already here. Half of our mobile network traffic is video now, and it’s really growing fast. Verizon has obviously made a move that reinforces that idea that mobile video is here to stay and is going to grow at a rapid pace. Our DirecTV (DTV) merger is more about mobile video than home video. It’s an opportunity to have content that we can now begin to distribute over all of our mobile devices. We have 100 million mobile customers that we intend to distribute this video to. I would view it in that context.

Do you view software-defined networking as a way to do that—to transmit information to all those people?

Yeah. So you think about this 100,000% growth in traffic since 2007—that was mobile Internet–driven. You think about this 10X growth between now and 2020—that is mobile video–driven. Without software-defined networking I don’t think the industry keeps up with these kinds of volumes. Without software-defined networking Netflix (NFLX) CEO Reed Hastings is going to continue to scream about how slow peering points are. You have to have this technology to accommodate video traversing these kinds of networks.

Can you liken this to another moment in time when you saw this kind of change?

Oh, yeah: cloud computing. We talked about the cloud for years, and people didn’t know what it was. Then all of a sudden you pick your head up, and it’s real. Amazon (AMZN) is real. IBM (IBM) has bought SoftLayer. The cloud is the basic way by which they do customer interaction for compute and storage and so forth. Five years ago we were all talking about it and sounding smart by saying “cloud.” Now everybody knows what it is. SDN is that significant.

A version of this article appears in the June 15, 2015 issue of Fortune magazine with the headline ‘A Stream for Every Smartphone.’