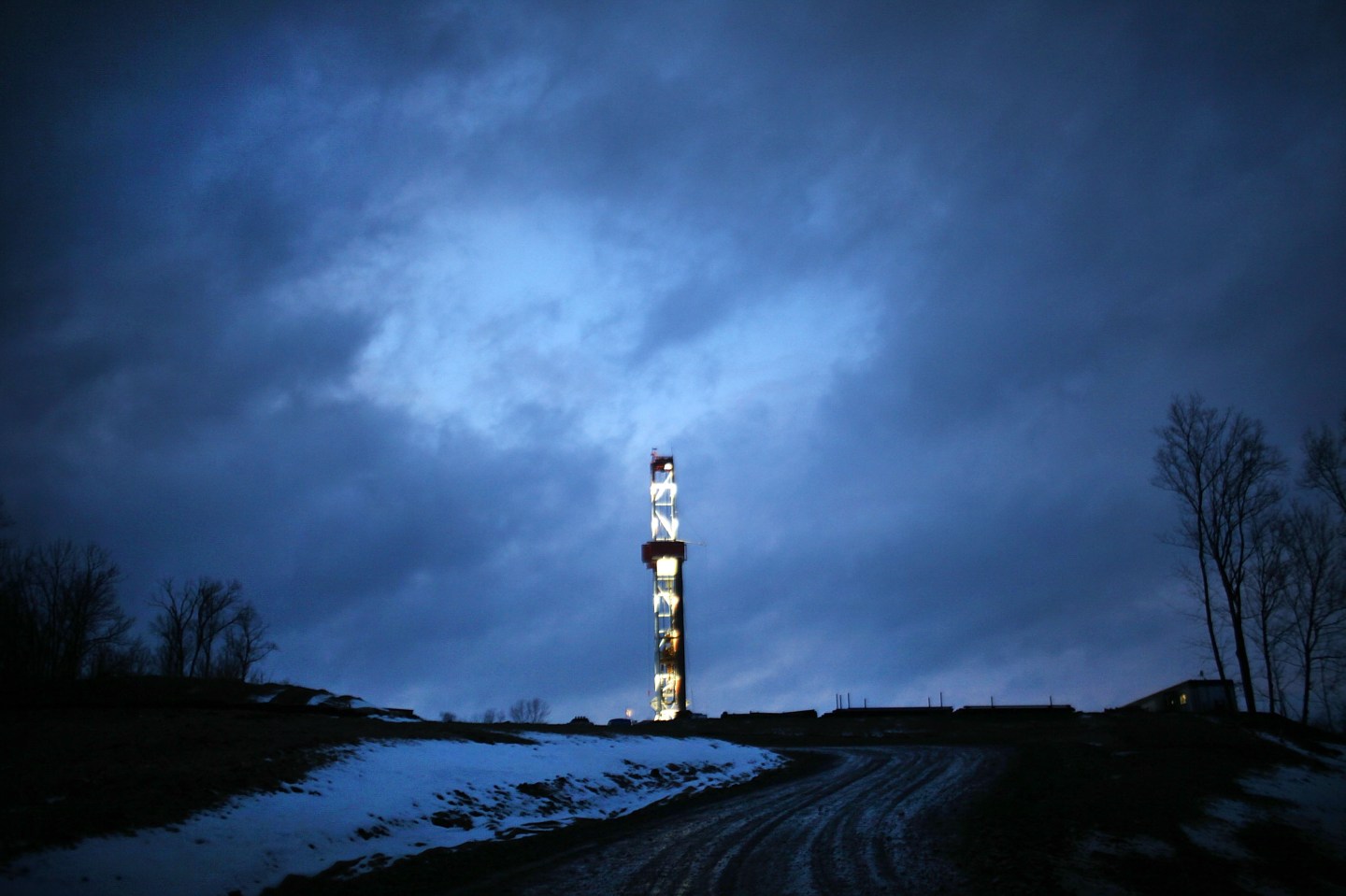 SPRINGVILLE, PA - JANUARY 17: A Cabot Oil and Gas natural gas drill is viewed at a hydraulic fracturing site on January 17, 2012 in Springville, Pennsylvania. Hydraulic fracturing, also known as fracking, stimulates gas production by injecting wells with high volumes of chemical-laced water in order to free-up pockets of natural gas below. The process is controversial with critics saying it could poison water supplies, while the natural-gas industry says it's been used safely for decades. While New York State has yet to decide whether to allow fracking, economically struggling Binghamton has passed a drilling ban which prohibits any exploration or extraction of natural gas in the city for the next two years. The Marcellus Shale Gas Feld extends through parts of New York State, Pennsylvania, Ohio and West Virginia and could hold up to 500 trillion cubic feet of natural gas. (Photo by Spencer Platt/Getty Images)
Photograph by Spencer Platt — Getty Images

OPEC is not what it used to be. The cartel of major oil producing nations, dominated by Saudi Arabia, used to meet to collude on cutting production in order to support prices. Now they meet to try to get someone else to do the cutting, and their target is the shale oil industry.

In the 2000s, a growing demand for oil coming from China and other emerging economies had driven oil prices from around $20 a barrel to over $100 before the Great Recession in 2008. Rising prices had pushed producers to find new conventional oil fields (they did not get very far) and develop technologies that would profitably mine “tight oil” sources — tar sands and oil shale. By the time the U.S. economy started recovering, fracking oil shale had become commercially feasible. And just in time. All of the 5 million barrel a day increase in global oil production since then corresponds to the increased output of shale oil. Without it, oil prices would have risen much higher than they did.

Oil prices collapsed last fall because the growth in demand worldwide did not keep up with the growth in shale supplies. Now shale fields are the most vulnerable to today’s lower prices because their output declines steeply after the first year of a well’s operation. So drilling must continue in order to sustain production levels.

Drilling of shale fields has now dropped sharply and oil production is expected to decline in the coming months. So for the present, OPEC is succeeding in its attack on shale oil and it remains as aggressive as ever in that attack. Even though OPEC announced at its recent meeting last week that the cartel was sticking to it production quota of 30 million barrels a day, OPEC was actually producing more than 5% above its quota in order to keep downward pressure on prices.

So is there a future for shale oil?

Some observers argue that shale drilling is an expensive, inefficient technology that only flourished briefly because the price of oil was temporarily so high. That argument ignores how little new supply the market has seen from conventional sources in recent years. Even though prices plateaued to just above $100 a barrel, global oil production from conventional sources did not grow.

Looking ahead, the global appetite for oil will rise steadily — mainly from continued industrialization in China and other emerging economies. Recent years have shown that oil supplies from conventional sources would not begin to satisfy that demand even if prices returned to historic highs.

Of course, the recent past may not be a good guide to the longer run. The ongoing turmoil in the Middle East has affected some of the region’s major producers. Iraq’s oil output has risen by 1 million barrels a day since 2010, and Iran’s production fell by 1 million barrels a day after economic sanctions were imposed. If economic sanctions are now lifted, Iran can be expected to gradually restore that production.

Will OPEC absorb that increase within the cartel’s quota or will the quota rise to accommodate Iran? Barring any surprises, it seems likely that increased output from the Middle East will at least offset the likely decline in conventional oil from other areas. However, as the recent scud missile attack on Saudi Arabia from Yemen reminds us, surprises are to be expected.

Is it likely that the Saudis and other low-cost Gulf states would expand their own production sharply and for an extended period? Some observers are skeptical of how far they could go even if they wanted to. Questions about OPEC strategy do not turn just on what is technically doable but rather on what is profitable.

Just as a cartel benefits from cutting output to raise price, it suffers from raising output to lower price. This would not be true if it could permanently eliminate competitors by temporarily lowering prices, but that is not the case here. The shale oil industry is resilient and flexible – just as it can be pushed out of the market by very low prices, it can promptly get back into the market when prices improve. So an extended attempt by OPEC to close down the shale industry is a lose-lose situation, and as such is very unlikely to happen.

George Perry is a Senior Fellow in Economic Studies at the Brookings Institution.