FIFA’s house of cards trembles as another one hollers ‘uncle’ 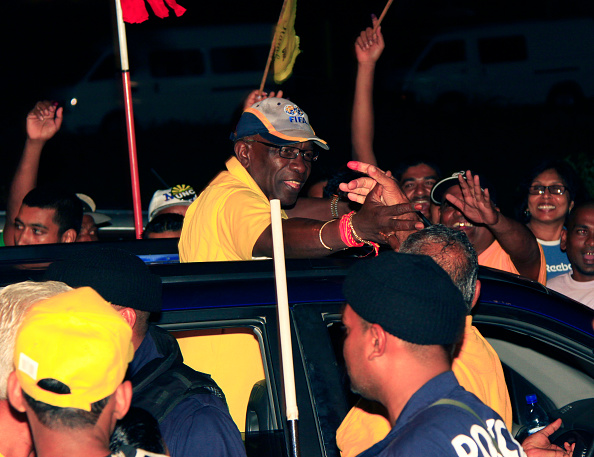 COUVA,TRINIDAD - MAY 24: (FILE) Former FIFA Vice President Austin "Jack" Warner (C) arrives at Rienzi Complex on the final night of the general elections on May 24, 2010 in Couva, Trinidad. On May 27, 2015 a United States Justice Department accused nine FIFA officials and five corporate executives of racketeering, wire fraud and money laundering conspiracy. Seven were immediately arrested by Swiss authorities in Zurich where FIFA is gathering for its annual general meeting and Warner is among those expected to face charges in the United States. (Photo by Sean Drakes/LatinContent/Getty Images)
Photograph by Sean Drakes — CON LatinContent/Getty Images

Hot on the heels of the publication of former U.S. soccer chief Chuck Blazer’s guilty plea, another of the former FIFA officials indicted on bribery charges says he’s ready to sing.

Dropping a bombshell in a hastily-convened appearance on local TV late Wednesday, Jack Warner, the former head of the Trinidad & Tobago soccer association and the regional CONCACAF, promised an “avalanche” of revelations, including some about FIFA’s soon-to-be-ex-President Sepp Blatter, that “not even death will stop.”

“I will give them my knowledge of financial transactions at FIFA, including, but not limited to, Sepp Blatter,” Warner said.

Blatter had resigned on Monday, despite being re-elected for a record fifth term at last week’s FIFA congress. However, he indicated he wanted stay on in an interim role until the end of the year to oversee the transition to new leadership.

With obvious bitterness, Warner added that he had written to the embattled Swiss supremo immediately afterwards, saying that “I empathise with you because in 2011, I was where you are today. The only difference is that you caused my demise. I didn’t cause yours.”

The revelations are coming thick and fast now as the U.S. investigation into years of alleged corruption at the governing body of world soccer gathers momentum. Although the investigation has focused so far on Blatter’s lieutenants, the New York Times reported Wednesday that the FBI is also investigating the man who has ruled FIFA for 20 years.

The pressure on the 72 year-old Warner–who denies charges on a total of seven counts of conspiracy, wire fraud and money laundering–is particularly intense: two of his sons are among those who have already pleaded guilty to the U.S. attorney’s charge. Warner was one of six FIFA and sports marketing officials added to Interpol’s wanted list Wednesday.

Later Wednesday. Chuck Blazer’s guilty plea had been unsealed, revealing for the first time allegations that bribes had also been traded for the right to host the 1998 World Cup in France. The investigations had previously mentioned only the 2018 and 2022 tournaments in Russia and Qatar, respectively.

Evidence had already emerged at the weekend that Blatter’s deputy, Secretary-General Jérôme Valcke, had been directly involved in a suspect payment of $10 million to the CONCACAF federation that Warner headed. Both Warner and the South African Football Association deny allegations that it was a bribe in return for letting South Africa host the 2010 tournament. FIFA had denied Valcke had anything to do with the payment.

As the investigation spreads wider and aims higher, it is also becoming increasingly politicised. Already Russian Vladimir President Putin has accused it of being a U.S. conspiracy to discredit his country and others, while Qatar’s Foreign Minister told Reuters his country was the victim of a racist, anti-Islamic campaign by the western media.