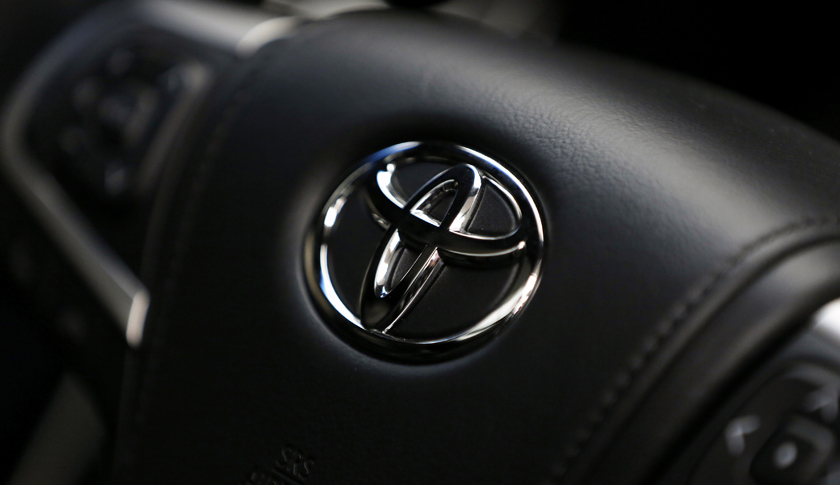 The Toyota Motor Corp. logo is displayed on the steering wheel of a Harrier crossover sport utility vehicle (SUV) displayed at the company's head office in Tokyo, Japan, on Tuesday, Feb. 4, 2014.
Photograph by Kiyoshi Ota — Bloomberg via Getty Images

Toyota, the world’s largest automaker, is testing a new type of in-car infotainment system that would allow drivers to use mobile apps like Spotify and Pandora through their dashboards.

The company, however, didn’t build the technology in-house or buy it from an independent supplier. Instead it’s getting this new platform directly from arch-competitor Ford.

Toyota recently announced that the company will “explore” using Ford’s SmartDeviceLink (SDL) technology on future Toyota and Lexus vehicles. The open source program, which is also branded under the name AppLink, integrates smartphone apps into vehicles that can be controlled using buttons, voice recognition technology and display screens.

Ford (F) has been trying for years to build a global in-car app market by offering its SDL software to automakers for free.

Toyota agreeing to test out the SDL is a far cry from committing to the platform, but is a big step forward for Ford, which has been on a quest to unify the auto industry under a single app ecosystem. Just as Google built a huge app market around Android, Ford wants to create a shared application program that can be used in any vehicle make and/or model.

“It makes sense for SDL to have as much broad adoption as possible,” said Don Butler, director of Ford Connected Vehicle and Services. “We’re hoping that other automakers will see this and help us build that critical mass.”

Automakers aren’t exactly known for sharing their innovations among one another, but in the case of apps they may have little choice if they wish to remain relevant in the vehicle infotainment world.

The problem facing Ford and other car manufacturers is that most in-car apps people want to use aren’t designed by automakers. They’re designed by companies like Google (GOOG) , Apple (AAPL), Facebook (FB) and Twitter (TWTR), as well as a host of Silicon Valley startups. These developers often don’t want to deal with the auto industry’s enormous fragmentation when creating new applications.

Today if an app developer like Spotify wants to get its music service embedded in the cars of 20 different automakers, it has to build at least 20 different versions of its app for each automaker’s infotainment system. With SDL, a developer can design one app, and, theoretically, it should work in any SDL-capable car.

The Ford-designed platform is a smartphone centric approach to in-car applications, meaning the majority of the app’s function and its Internet connection resides in the driver’s smartphone. The phone connects to the vehicle via Bluetooth, Wi-Fi or USB. SDL then renders driver-optimized version of its apps on the in-dash display.

Despite the recent collaboration between Toyota and Ford, the real question is whether SDL software comes too late to make any difference in the market. Both Google and Apple have developed their own in-car software to run apps, called Android Auto and CarPlay respectively. Most automakers have committed to supporting them, including Ford (Toyota, however, appears to be keeping its distance from both companies).

But, Butler said it isn’t Ford’s intention to shove Apple and Google out of the driver’s seat. Rather SDL is meant to be an alternative development platform to CarPlay and Android Auto, he said.

Both platforms offered by Google and Apple have their technical limitations, because they essentially create scaled-down copies of the Android and iOS interfaces and aren’t customized for in-car use. Many developers will be perfectly content with that setup, Butler said, but developers that want to create a better in-car app experience may gravitate to SDL. Through it they can integrate their services more closely with auto interfaces and create specific car features, he said.

For instance, with a driver’s permission, an app could tap into the car’s internal networks, sensitive GPS data, or even collect engine data. An insurer like Progressive could build a car app for its SnapShot program that can calculate your premiums based on your actual driving behavior.

Apps on SDL could use driving data to approximate your mood. When the windshield wipers go on, maybe a perky playlist from Spotify is just the ticket to take your mind off the crappy weather.