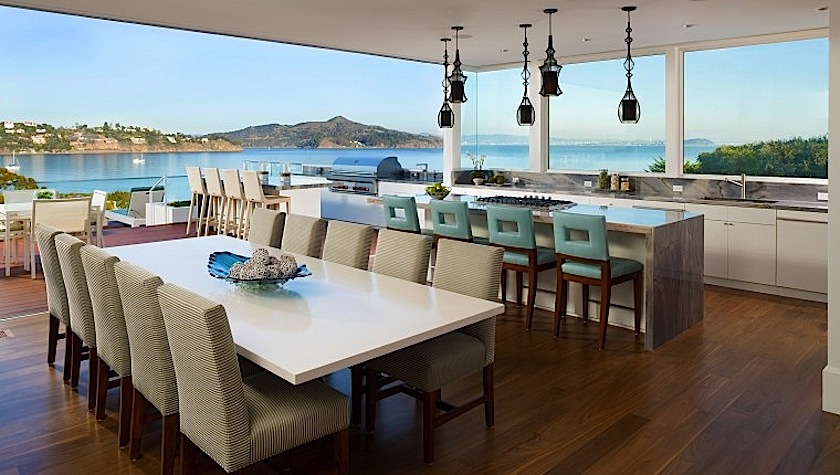 Chandeliered conference rooms are so early aughts. As the startup sector breaks business norms with its sweatshirt-clad CEOs, open office plans, and irreverently named conference rooms, the hotels that cater to them have followed suit. Take the Alexandrite Suite at Casa Madrona, a Sausalito hotel that underwent a $25 million renovation in 2011. From its name—Alexandrite is a gemstone that’s able to change color depending on its surroundings in a sort of pivot for the mineral world—to its perks, the 5,000 square-foot space is designed to appeal to those who disrupt.

This suite does not have a television, it has a nine-panel “media wall,” controllable by whatever Wi-Fi-enabled device happens to be on hand and watchable if the viewer can take their eyes off the sailboats on the bay beyond the deck. “We’ve seen venture capitalist companies just lounging around and having startups present to them in a way more relaxing setting,” says Sietse Nabben, the hotel’s general manager.

At $10,000 a night, the suite has been especially popular among venture capital firms and startups who have enough money to, say, throw a raging party that includes access to a private chef and a Mercedes ML350 Bluetec (with a driver) but don’t have to disclose their expenses publicly. Nabben estimates more than 50 tech companies have rented out the suite or the neighboring Junto space (“Junto” means togetherness) for events. For longer stays, there’s a $500,000 a month package that includes accommodations for up to 24 people, a wine bar refreshed weekly with Napa and Sonoma selections, and a private yacht excursion on Richardson Bay.

Part of the suite’s appeal is the opportunity for anonymity. (Casa Madrona declined to disclose the names of any companies who have booked the Alexandrite Suite.) Though Sausalito is only 11 miles from San Francisco, with its Mediterranean cliffsides and mom-and-pop stores, it feels a world away. “We’ve seen a lot of traction from Silicon Valley,” says Nabben. “There are certainly well known figures working in that industry and they like to go to a location where they might not be as well known or run into a competing business that’s around the corner.”

Last year, Casa Madrona introduced a perk directed, unabashedly, at the people who delight in automation and innovation (and, in this case, inebriation): guests at the Alexandrite suite could have a bottle of champagne delivered by a drone.

“It cost us a few thousand dollars to get it up and running but the more important part was the aftermath that happened, the attention that we got from the tech world,” Nabben says. They’ve since discontinued that service, citing government regulations. Plus, drones aren’t all that in anymore.

“Times are changing,” Nabben says. “We’re excited to do something new.”