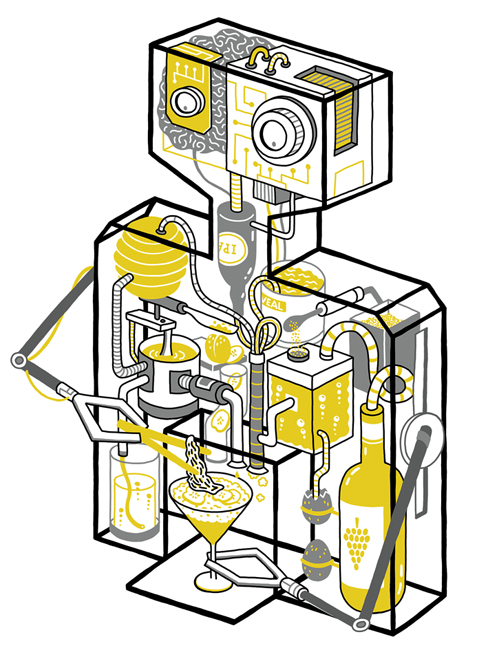 Illustration by Adam Hayes for Fortune

The syrup tastes buttery and sweet—piquant too. There are hints of tamarind, molasses, Thai chili pepper. It’s satisfying—­unusual, like exotic mustard. The condiment in question? Computer-generated barbecue sauce, brought to you by IBM (IBM).

Watson, Big Blue’s cognitive computer, is best known for its star turn on Jeopardy! But lately it’s been pulling shifts in the kitchen. The result? Strange new treats like the Bengali Butternut BBQ Sauce on my tongue. “It is able to understand the underlying science of how things go well together,” says Steve Abrams, director of Watson Life, “and extend the creativity of human beings.”

In April, IBM released a cookbook in partnership with the Institute of Culinary Education. It contains more than 65 recipes featuring bizarre beverages (an old-fashioned brewed with chicken broth) and peculiar dishes (a mushroom-and-strawberry kebab). The reception so far has been mixed: “Confoundingly cohesive,” wrote one reviewer. “Algorithmically lousy,” wrote another.

What’s all this got to do with business? Watson is applying its culinary creativity to the pharmaceutical industry, where it’s helping make personalized drugs for companies such as Johnson & Johnson (JNJ) and Sanofi. A toothsome goal indeed.

At this year’s Berkshire Hathaway shareholders meeting, Chef Watson baked a celebratory biscuit for Warren Buffett and company: a sweet-corn cookie containing lime juice and chili powder. When Fortune inquired about the recipe, which isn’t in IBM’s cookbook, a spokeswoman warned: “The only one we have is for 140 cookies.”

Approximately 1% of the world’s population suffers from celiac disease, rendering them allergic to the common wheat protein gluten. The condition is no trouble for Chef Watson. “For those who have a difficult time finding foods to eat,” Abrams says, “Watson can help with the restrictions and add variety.” And that’s no fad.

Allow us to make a suggestion, Chef: NASA researchers run taste-tester trials to keep astronauts from suffering from “food fatigue”—the gustatory equivalent of cabin fever. Why not partner to keep orbital menus exciting and make better use of limited ingredient options? (We’ll have the blue-cheese-and-spicy-miso tofu, please.)

A select recipe from Watson

This story appeared in the June 1, 2015 issue of Fortune magazine with the headline ‘The Name’s Watson. Chef Watson.’