Chart of the day: The five generations of iPhone 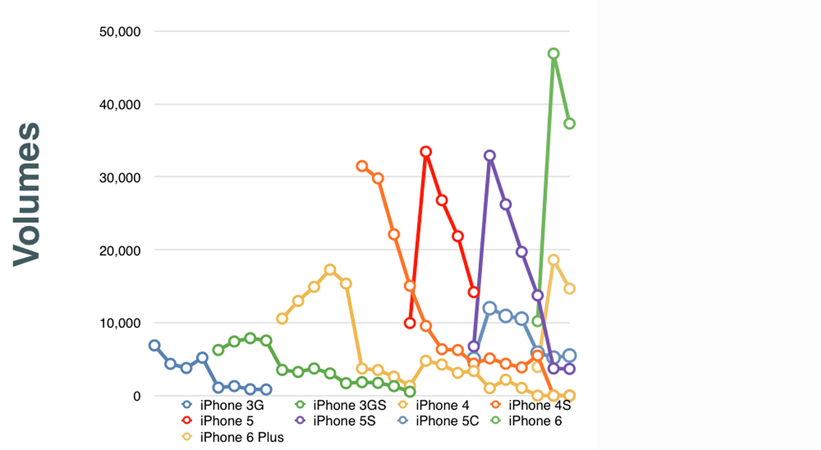 Two of my favorite independent analysts, Asymco’s Horace Dediu and Above Avalon’s Neil Cybart, each took a crack this week at breaking the iPhone’s installed base into its constituent parts.

Cybart, starting with Fiksu data and adjusting for its U.S. and Eurocentric tendencies, figures that the 475 million iPhones still in use are distributed roughly as follow:

Dediu, who produced the chart attached above, lumps the new iPhones introduced in each of the last eight years into five generations. Moreover those generations have, until now, obeyed what he calls Schiller’s Law:

When assessing sales for a new model of the iPhone, Apple used an easy shorthand: “Each new generation sold approximately equal to all previous generations combined.” — Phil Schiller’s Testimony in Apple v. Samsung

That kind geometric growth is not easy to maintain; indeed, Dediu doesn’t expect the iPhone 5 and 6 to keep it up.

“However the growth of the overall franchise is apparent,” he concludes. “In particular you can see how first year sales have a very healthy pattern of growth, especially when measured in terms of revenues.”

Below: Dediu’s revenue bar graph, in billions of dollars. (The last two generations have not yet run their course.)