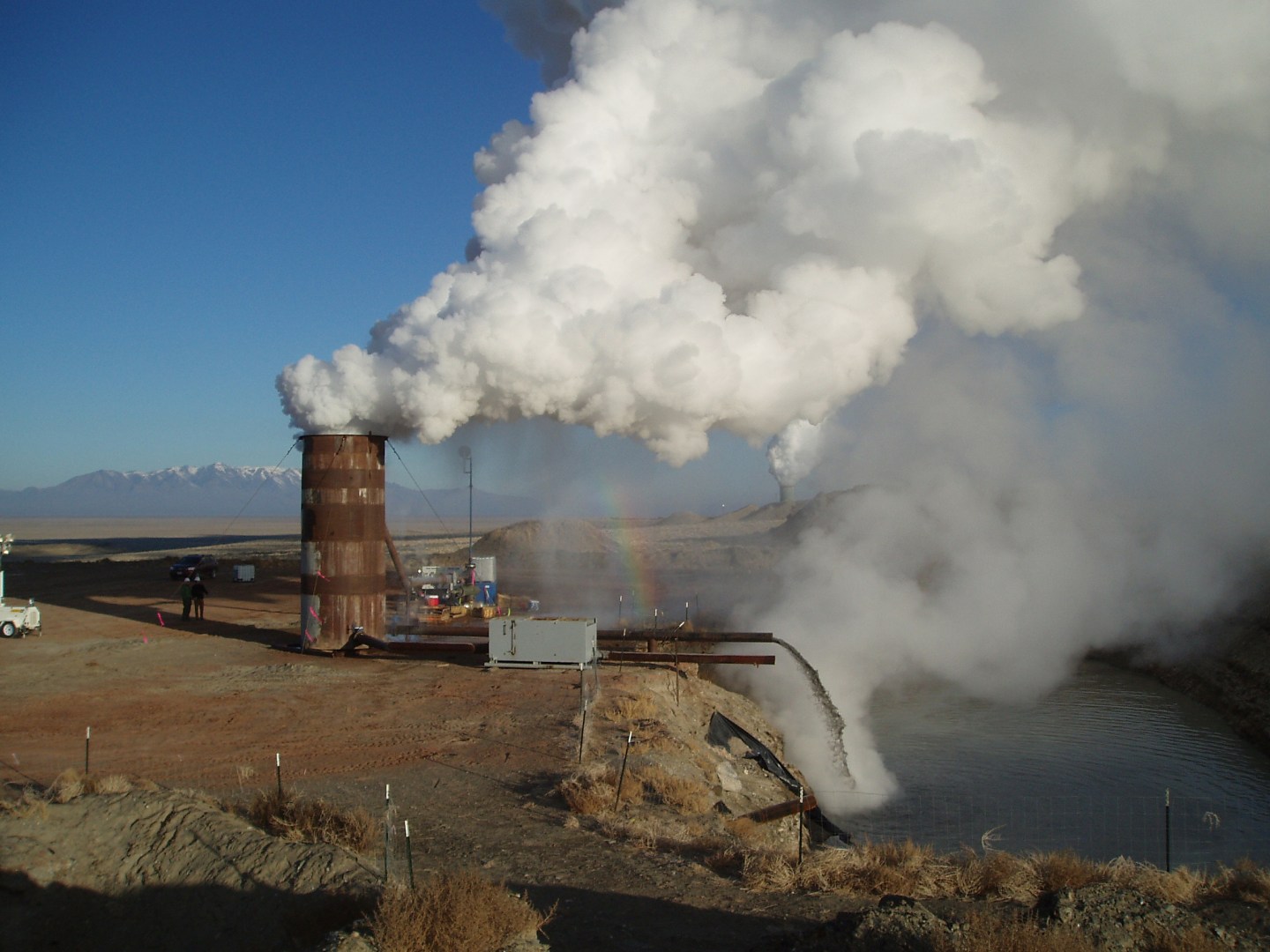 Less than a hundred miles east of Black Rock Desert, where hippies and techies frolic every year at the Burning Man festival, sits a remote, struggling geothermal power plant that taps into the hot rocks and water far beneath the surface of the Nevada desert to produce energy. The project — originally built in 2009 and backed by the Department of Energy during the Recovery Act — has been under performing for years, causing financial hardship for its owner and concern by its government supporters.

But, as of last Thursday, the plant finally has a new owner with a new plan to get it back up and running at full capacity. Tech startup AltaRock Energy has officially acquired the Blue Mountain Faulkner geothermal power plant using its new project arm Baseload Clean Energy Partners, which has an anchor investor in venture capitalist Vinod Khosla, AltaRock Energy CEO Aaron Mandell told Fortune in an exclusive interview. Khosla’s involvement in Baseload is from his personal funds and not from Khosla Ventures.

AltaRock was founded in 2007 and originally funded by some of Silicon Valley’s biggest names — Khosla Ventures, Google.org, Advanced Technology Ventures, Kleiner Perkins, and Paul Allen’s Vulcan Capital — back when cleantech was supposed to be the biggest thing since IT. That cleantech bubble burst a couple years later, but over the years the company has developed next-generation geothermal power technology.

In an era when huge clean energy farms using solar panels and wind turbines are being built across the U.S., geothermal power plants have long been the underdog — big on potential but short on promise. That’s because geothermal energy is one of the only clean energy sources that can provide energy around the clock, unlike wind and solar that only generate energy when the sun shines and the wind blows. But despite its stability, it’s only available in very limited regions.

AltaRock’s tech facelift of the Blue Mountain plant represents a bridge between the geothermal industry’s past and its potential future.

The future of geothermal energy

Traditional geothermal power plants tap into the relatively rare geologic occurrence where hot underground rocks meet significant water and steam. That hot water and steam is usually pumped to the surface via a drilled well and can produce usable energy. In the U.S., states such as Nevada and California have some of these places naturally occurring, and globally Indonesia is a hot spot. But as of late 2014, there were fewer than 1,000 traditional geothermal projects around the world, delivering a very small amount of the world’s electricity needs.

The next generation of geothermal energy technology is called enhanced or engineered geothermal (EGS for short) and the idea is to use technology to pump water into deep wells to produce geothermal power where there isn’t naturally occurring water and steam. This type of technology could open up geothermal power to many more places across the world, beyond those where it’s been relatively easy to tap into.

If there’s any company associated with enhanced geothermal, it’s AltaRock. Co-founder and CTO Susan Petty has over three decades in the geothermal industry, and Mandell is a serial entrepreneur and former investor in energy and water technology. The company has spent eight years riding the roller coaster of cleantech VC bubbles and busts, volatile political winds, earthquake fears, breaking drills, and the slow revival of the economy, yet has continued to slowly work on its handful of geothermal projects using the technology it has invented.

AltaRock uses a technology it calls “hydro-shearing” to stimulate an under performing geothermal well. The process entails pumping cold water combined with particles of a material deep down into the reservoir, temporarily plugging parts of the well and enabling other tiny cracks to form. The materials biodegrade and the end result is that the fractures in the rock are open at just the right size, enabling the water — and thus steam and energy — to flow.

When Blue Mountain was originally built by Nevada Geothermal Power (NGP), using tech from geothermal tech supplier Ormat, there were great expectations. It was strongly supported by Nevada politicians, including Senator Harry Reid who has long been a major advocate of the geothermal industry in Nevada.

With close to 50 megawatts of power expected in the plans, Blue Mountain was one of the larger geothermal power plants built in the state at the time. Nevada utility NV Energy even agreed to buy the power from the plant in a 20-year deal.

The project then received a $98.5 million loan from John Hancock Financial Services backed by an 80% loan guarantee from the U.S. Department of Energy under the American Reinvestment and Recovery Act. Nevada Geothermal Power also raised a mezzanine loan for the project from EIG Global Energy Partners.

But early on after completion there was a drop in temperature at the site, and the energy production fell simultaneously. Instead of the planned 50 megawatts of power, the site was delivering closer to 35 megawatts of power and also was projecting continuing annual drops in energy capacity potentially hitting 15 megawatts by 2020. Because of the under performance in energy generation, the site underperformed financially, and Nevada Geothermal Power defaulted on its loan to EIG, leading to EIG taking over the site in 2012.

In 2014, EIG hired AltaRock to improve the site with its technology and potentially bring it back up to capacity. Mandell told Fortune that the company has already been able to halt the temperature decline, and boost the energy capacity back up to 40 megawatts.

But now AltaRock bought the site and are implementing a plan to bring the capacity back up to 50 megawatts using hydroshearing in the first stage, and potentially drilling in the second stage. Mandell wouldn’t disclose the price AltaRock paid for the site, but you can assume it wasn’t huge since it bought the plant using VC funding.

Part of the cash flows from the boosted energy production of the site will go toward paying off the DOE loan (there’s $70 million left), which Mandell says will be repaid entirely by 2029. The DOE had to approve AltaRock’s acquisition and would naturally be supportive of a plan that would avoid a default, like it faced with a couple other loan recipients (the most famous being Solyndra).

Much of the remaining cash flow will go to the investors in AltaRock’s new project arm Baseload Clean Energy Partners, which is meant to operate like a small Yieldco, generating a potential steady yield to investors from the cash flows of a future portfolio of energy projects. AltaRock needs to prove that the Blue Mountain site can be boosted enough to produce the cash flows needed to help prove out its Yieldco model.

Other, more mature clean energy sectors, such as solar and wind, use these types of cash flow financial mechanisms regularly, and they’ve become quite trendy in recent years. But this is the first one I’ve heard of focused on advanced geothermal tech. Mandell says that the yieldco can also be beneficial because it enables the company to separate out the technology development activities, which have some risk, from the project cash flows at the yieldco level, which are very low risk.

For AltaRock, the project acquisition is a pretty big deal. Mandell says it’s a “big step for us. We’re not just a tech company anymore. We’re an energy company with customers in Nevada.”

Down the road, after the company has made enough revenue stimulating other companies’ wells, AltaRock will focus heavily on building entirely new enhanced geothermal sites. If that happens, it’s founders will have spent the better part of a decade, slowly and methodically, getting to that true breakthrough point of helping bring geothermal power to many more places in the world.