U.S. companies are making a killing on foreign military sales 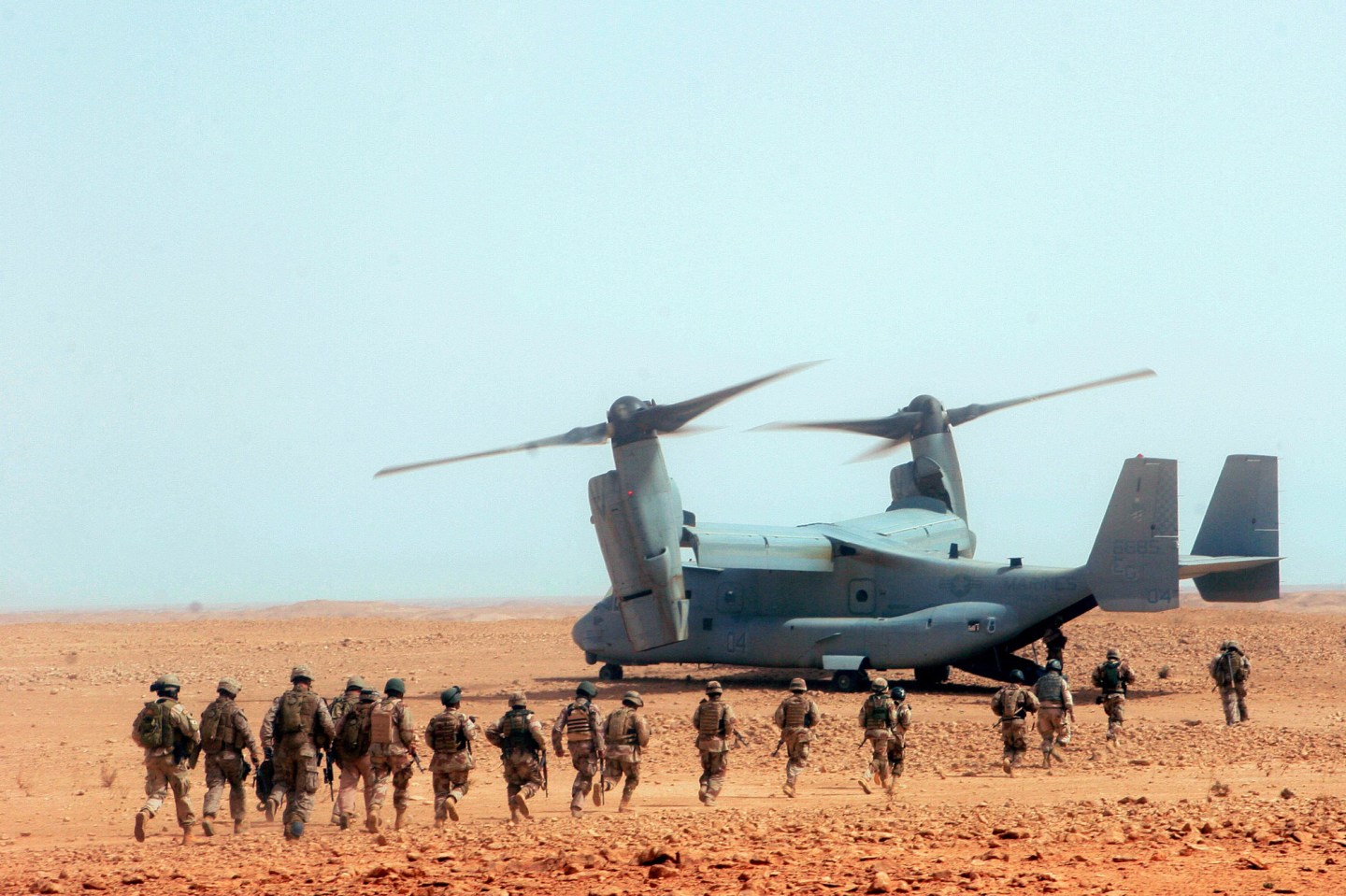 An MV-22 Osprey sits on the deck waiting for members of the 27th Infantry Brigade, 7th Iraqi Infantry Division and Marines with Military in Transition Team 0720 load up.
Courtesy of Boeing

With violent conflict and geopolitical tension rampant across the globe, U.S. military contractors are finding willing buyers for their wares across Europe, the Middle East and Asia, even as legislative wrangling and the looming return of sequestration caps threaten defense budgets at home.

April saw the value of new foreign military sales jump three-fold over the same month a year ago, and May is off to a big start with some $3.5 billion in U.S. foreign military sales announced in the past week alone. Driven by regional unrest, foreign militaries are generally looking to upgrade their security forces with the latest systems that can give them a technological edge, says Guggenheim Securities defense analyst Roman Schweizer. The need for new security is pushing them towards U.S. defense contractors, who have what foreign militaries want.

“There’s a pretty broad-based demand for these kinds of systems and U.S. companies have the technology that sets them apart,” Schweizer tells Fortune. “If foreign buyers have the ability to buy those things, they will.”

And, it seems, they are. Among last week’s new orders are:

A large chunk of April’s total was a $1.5 billion deal for Boeing (BA) to service Australia’s fleet of F/A-18 Super Hornet fighter jets and E/A-18 Growlers, but a significant amount also came from a $952 million deal with Pakistan for 1,000 Hellfire missiles (made by Lockheed Martin) and 15 Textron (TXT) built AH-1Z Viper attack helicopters. Largely absent from that accounting is a decision by Poland last month to buy Raytheon’s (RTN) Patriot air defense system, a deal that could ultimately be worth $5 billion.

In some ways, a steady uptick in foreign military sales can be explained via a quick perusal of the international headlines. Chinese muscle-flexing in the South China Sea and elsewhere in the region is driving its neighbors—Japan, Indonesia, Malaysia, South Korea and even the Philippines—to upgrade their capabilities, particularly in the air and at sea. Likewise, ordnance used in Saudi Air campaigns over Yemen and against the Islamic State must be replenished.

But, the most significant driver of foreign military sales in the months and years ahead may be the conflict that has slipped below the fold as conflicts in the Middle East capture international headlines. Though a tenuous cease-fire in eastern Ukraine has tempered violence there somewhat, aggressive posturing by Russia is changing the defense calculus across Europe, Schweizer notes. “What the Russian government has done—that’s really changed the underpinnings of what’s been perceived as the European strategic framework over the past couple of decades,” he says.

The shift in European defense thinking isn’t just philosophical, but material as well. In the last month, Sweden, Norway and Finland have all announced plans to boost defense spending in the near-term as air space violations by Russian jets and reported submarine sightings in those countries’ territorial waters have increased. Sweden plans to enhance its anti-air defenses, among other things. Finland has vocalized a need for new fighter jets.

Per usual, the variable to keep an eye on all this is the price of crude, which dampens the buying power of several of the U.S. defense industry’s biggest buyers, particularly in the Middle East. “Is that going to affect the appetites of Middle Eastern buyers of U.S. weapons systems?” Schweizer asks. ‘That hasn’t been the case thus far, but these deals take awhile to put together. What matters is what the world looks like in six months.”