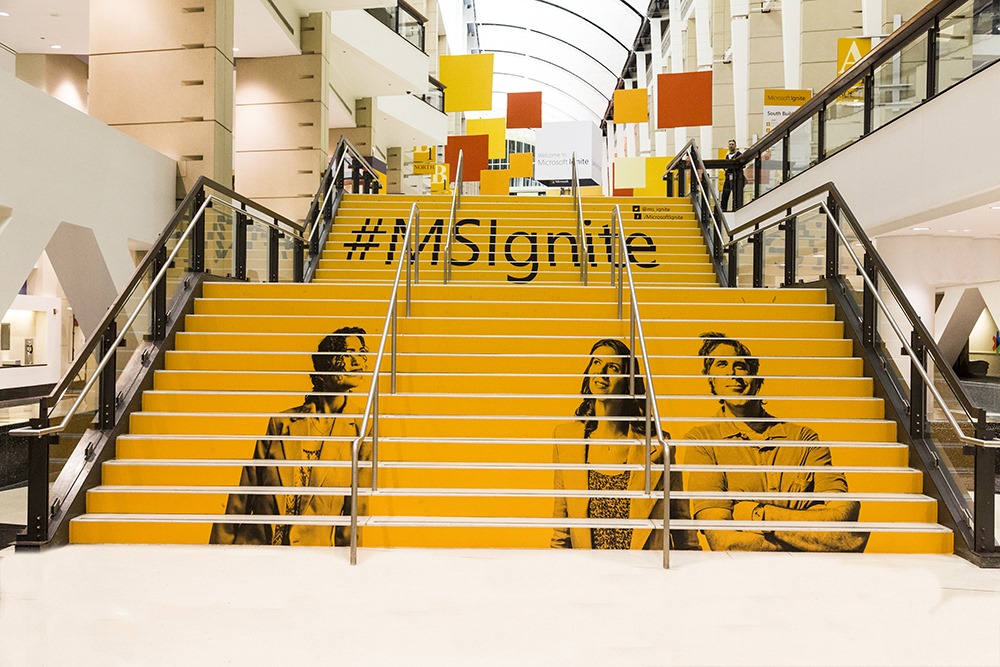 Microsoft remains a juggernaut in the desktop and server applications that run in corporate shops. What self-respecting numbers cruncher doesn’t rely on Excel?

But its Windows-Office tandem franchise is also under attack by Google Apps and other comers especially in smaller shops and startups. So at a parade of events over the past few weeks, one thing Microsoft has had to show is that it can keep polishing up Windows and Office while also building out its Azure cloud and convincing business users that it should be their preferred cloud going forward.

One major challenge is that Amazon Web Services, the massive cloud run by the e-commerce giant, has been making a play for corporate accounts for years and now Google is also making its bid to be the home for valuable business data. VMware, IBM, HP, and others are also vying for this cloud business.

With that in mind, at its Ignite show in Chicago, Microsoft execs including CEO Satya Nadella talked up updates to the classics—Office 2016, Windows 10, SQL Server 2016—along with the new Microsoft Azure Stack.

The new Azure Stack combines a bunch of existing software—Windows Server 2016 and Azure Pack among other things—that will allow companies to run their own data centers on the same foundation software that powers Microsoft cloud service. That fidelity of software on both sides enables an easier hybrid cloud scenario, in which on-site software and data can work easily with cloud-based resources.

It’s a good story but it’s also one that echoes the sales pitch of pre-cloud Microsoft: “Make sure you run all our latest stuff and wonderful things will happen.” That is often a more expensive and a trickier proposition than advertised.

To be sure, Microsoft (MSFT) has a lot going for it—a big, if aging, installed base of Windows-and-Office users and tons of SQL Server and Exchange email running everywhere. There are thousands of information technology administrators who are familiar with that technology, a fact that should not be underestimated. Microsoft also has relationships with CEOs, chief information officers, chief technology officers, insert-your-favorite-C-level-exec-title here, and others, who could grease the skids when a company makes a cloud buying decision.

On the flip side, there are a ton of one-time Office users who have moved on to Google Apps and even more younger workers who started out there and couldn’t care less about Word or PowerPoint. And then there are many people who left Windows in the dust in the mobile shift for Android or iOS.

So while Microsoft can and does claim 1.5 billion Windows users worldwide, in its third quarter Windows revenue was down 19%, 22% or 26% depending on which version you’re talking about. Revenue from consumer and versions of Office preinstalled on new PCs were also down for the quarter.

That’s probably one reason Microsoft is making upgrades from Windows 7.1 and 8 to Windows 10 free for at least a year. And also why Nadella last year, in a bold move, broke the dependency between Windows and Office, opting to offer Office on Android and iPad tablet devices. That left the old “Windows First” Microsoft mantra in the dust.

At Ignite, company execs talked up SQL Server 2016, the next generation of the popular database and promised a test build soon. This release promises to bridge the gap between SQL Server databases running on-premises and Microsoft Azure cloud—as Nadella told Fortune in an interview. If a business is running a large database operation inernally that outstrips its capabilities, SQL Server 2016 in theory will move that task up to Azure to make use of that horsepower.

At the show Microsoft also continued to beat the drum the new Windows 10, due later this year, will work across a wide range of devices —PCs, tablets and phones—a key strategy that it hopes will win over mobile developers that have eluded it thus far. As former Microsoft CEO Steve Ballmer famously said, without developers, a company’s platform is toast.

And for all those Office defectors who came to love easy-peasy document sharing in Google (GOOG) Docs, Microsoft had caught up on that, but has now raised the ante with promised real-time document co-authoring in the upcoming Office 2016 release. It will show up first in Word and then in PowerPoint and other applications according to The Verge.

Nadella has said the fact that so many companies run Microsoft software in-house means it will be easier for Microsoft to build hybrid clouds linking those customers to Azure. But to do that those Microsoft shops need to update all that Microsoft software they’re already running.

In the meantime many of those same customers are putting workloads in Amazon or Google clouds, or at least testing them out. Given that both Amazon (AMZN) and Google, not to mention older competitors like VMware (VMW) , IBM (IBM) and others, are all duking it out here, this will be an interesting ride.