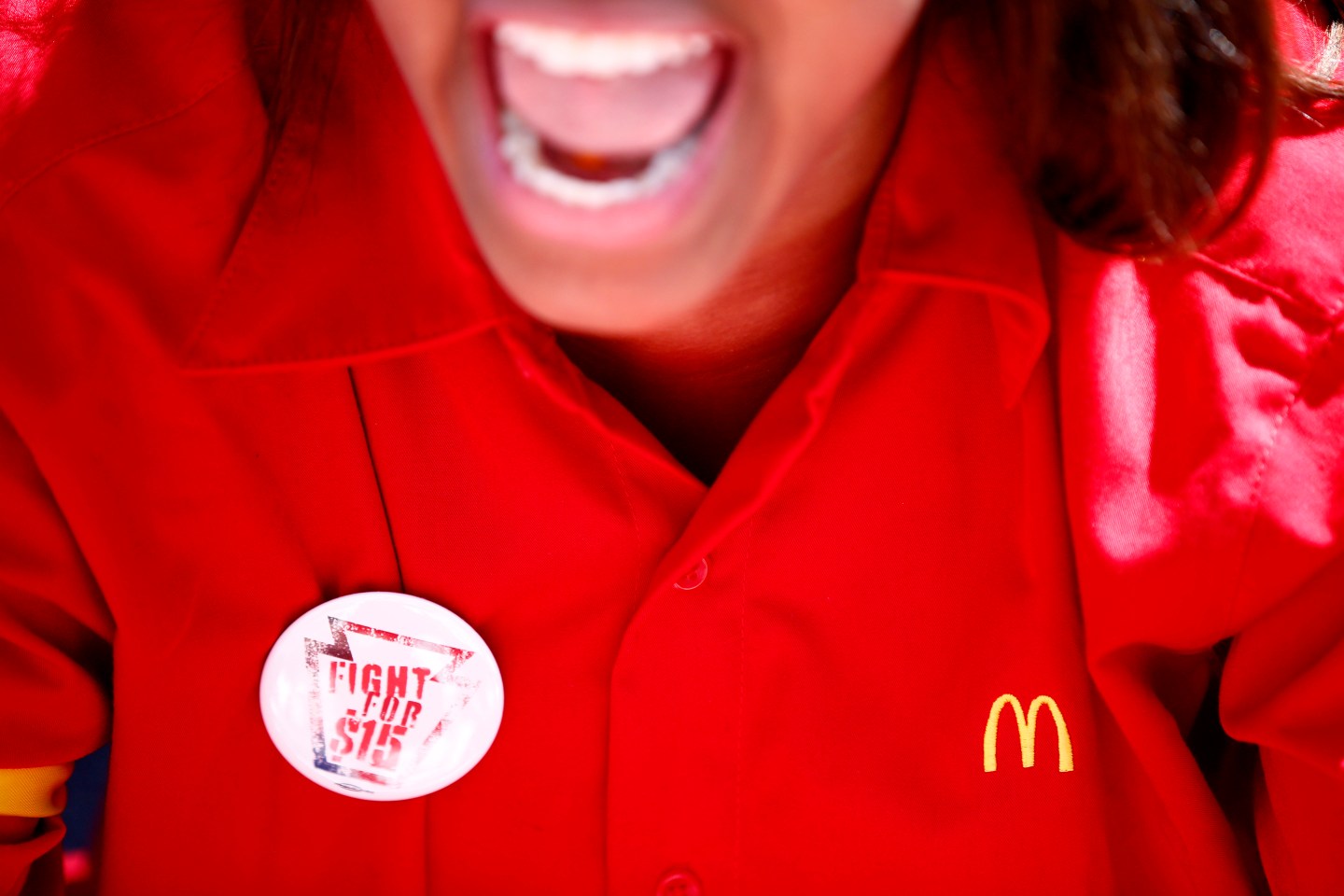 FILE - In this Sept. 4, 2014 file photo, a fast-food worker is chants slogans before being detained by police during a protest to push fast-food chains to pay their employees at least $15 an hour, outside a McDonald's restaurant in Philadelphia. Labor organizers, fast-food workers and Wal-Mart employees have campaigned for higher pay in protests across the country. (AP Photo/Matt Rourke, File)
Photograph by Matt Rourke — AP

When McDonald’s announced last month that it planned to raise wages for some of its workers in the United States, the company said the increases—to $1 higher than the local minimum wage—would apply only to the restaurants it owned.

On Monday, a little more than a month after its pay hike announcement, McDonald’s CEO Steve Easterbrook announced his long-awaited strategy to turn around the hamburger chain’s shrinking revenues, profits, and customer traffic. Alongside plans to reorganize its internal corporate structure and to cut costs to the tune of $300 million annually, Easterbrook said the fast-food giant will put more emphasis on franchising. McDonald’s will sell about 3,500 of the restaurants it owns to franchisees between 2015 and 2018; it will be 90% franchised by the end of 2018.

As the company sells its restaurants to franchisees, doesn’t that mean that fewer workers will get the chance to earn the higher wages McDonald’s promised in April?

McDonald’s goal is to increase its global franchised rate from 81% to 90%, but in the United States, it’s already 89% franchised, according to Hary, which means that much of the new franchising will take place overseas. Of the 15,000 McDonald’s locations in the United States, the company owns about 1,500. When asked how many of those 1,500 locations McDonald’s plans to sell, Hary said, “We didn’t break [that] out as part of yesterday’s announcement.” Should the company sell any of its U.S.-based restaurants to franchisees in the next three years, the workers there would no longer be covered by the company’s pay policy.

In rolling out its turnaround plan, McDonald’s said that increased franchising would lead to more stable cash flow, and Easterbrook touted McDonald’s long history as a franchiser as a major factor in the chain’s success. But the plans to add 3,500 more franchised locations comes at a time when franchisees appear disillusioned with McDonald’s. A recent survey by Janney Capital Markets of a small subset of McDonald’s franchise operators—32 of 3,100 nationwide—found that franchise owners’ six-month outlook was the lowest in 11 years. McDonald’s decision to raise wages has been a point of contention since franchise owners think it will force them to do the same.

McDonald’s relationship with its franchises is also currently the subject of legal scrutiny. Historically, the company has used the system to shield itself from liability for low worker pay, claiming that it doesn’t set worker wages; franchise owners do. That defense is now being tested in a series of hearings and an upcoming trial. The legal actions stem from a December 2014 decision by the National Labor Relations Board to file labor complaints that, for the first time, classified McDonald’s as a joint employer of workers at its franchise restaurants.