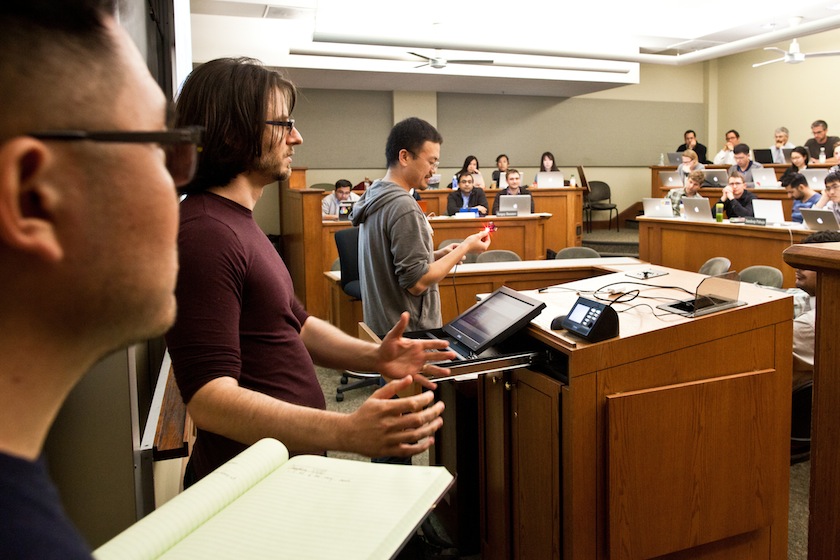 Below, at the front of a small auditorium, teams of students take turns presenting updates to their peers and instructors about their startups. Whether these ventures ever launch is, for the purposes of the course, irrelevant. But Lean LaunchPad successes include a company sold earlier this year for more than $200 million.

Tonight, most teams will leave the podium buoyed by the feedback they’ve received, the criticism and suggestions that will push their projects closer to viability. One team, however, will leave ashen-faced and humiliated, their presentation cut short in a takedown that, it turns out, was a carefully calculated kick in the pants.

Blank’s eight-week class at Haas is based on a theory of entrepreneurship rooted in the belief that the traditional model of business development fails to capture the needs of a startup. According to the “lean startup” method, traditional business plans are inappropriate for most new ventures. “The only thing you don’t have is any real customer data,” Blank says. “You have no … idea whether you’re a visionary, or hallucinating.

“Unlike a large company that can write a plan because they have facts, all we have are untested hypotheses.”

Startup investors, Blank says, don’t even look at business plans; they’re not expecting a five-year forecast, they want to know if the product will sell, and how a company creates value for investors and customers.

So, students and practitioners of the lean startup methodology hit the streets with a constantly evolving “minimally viable product” prototype in hand, talk to dozens and dozens of people—possible partners, prospective investors, especially potential customers—and must be ready to pivot on a dime.

Instead of a business plan, a “business model canvas,” typically in nine sections, guides product development. Hypotheses about everything from customer relationships to value propositions to important partners must be tested, all to answer questions such as “What is the product?” and “Who are the customers?” and “What’s the distribution channel?”

Starting a new company is much different from operating an established one, and the “lean startup” model has spread widely since it began to take root in the 1990s. Now, it’s sweeping through B-school curricula at the pace of a revolution.

“It’s now just permeated everything we do around entrepreneurship at HBS,” says Harvard Business School entrepreneurial management professor Thomas Eisenmann, faculty co-chair of the school’s Rock Center for Entrepreneurship. Eisenmann emphasizes that at HBS, “entrepreneurship” includes work on startups to innovation within established companies. And he says all business school students need to learn the lean startup methodology.

“No matter what they do in their careers—go off to a private equity firm, to consulting, go work for a big company, be in the marketing unit at Merck—they’re almost certain to be involved in launching new businesses or new products, or working with people who are,” Eisenmann says. “If they understand these concepts, they’ll be able to ensure the right product gets built.”

At NYU’s Entrepreneurial Institute, lean startup methodology “underpins a lot of what we do,” says executive director Frank Rimalovski. “When you have a good idea, you go out and talk to customers, you don’t just build it and hope the world will beat a path to your door.”

But many business schools are struggling to leave old dogma behind, says Blank, an eight-time tech entrepreneur. Part of the problem is educators’ adherence to traditional thinking, and schools’ reliance on pedants rather than innovators to deliver entrepreneurship education, Blank says. “Some entrepreneurship departments are staffed with people who have never practiced,” Blank says. “It’s kind of like getting sex education advice from your priest.”

About a quarter to a third of the teams in Blank’s Lean LaunchPad classes at Haas actually launch a startup, Blank says. And a number of successful products have been developed in Blank’s classes, including Krave, a popular natural jerky brought to supermarkets across America by Haas MBA graduate Jon Sebastiani. After cockily presenting in class one night a slide of a $435,000 pre-order check from Safeway, the Krave team had run into catastrophe: their manufacturer fell through and they had 90 days to fix the problem.

But class resources were at hand. “It really gave me the creativity to think through it, the ecosystem of people to reach out to,” recalls 44-year-old Sebastiani. The team made a major manufacturing pivot, buying their own jerky-making equipment and hiring food chemists to train them to make the product.

Early this year, chocolate maker Hershey bought Krave for more than $200 million. Lean LaunchPad was instrumental to Sebastiani’s meat-snack success, he says. “It was friggin’ magical,” he says. “It was incredible.”

Lean LaunchPad students are graded on their ability to come up with a viable product, whether it’s ever going to launch or not. “I’m not running an incubator. I’m teaching a methodology,” Blank says. “The minute you start talking about investments and ROI in your classroom, you become a trade school. I honestly don’t care if they stick with their ideas but whether the education will stick with them for the rest of their lives.”

One night this spring in his Lean LaunchPad class at Haas, a team developing a treat-dispensing robot has just been commended for their latest work and urged to come up with associated products—branded treats?—for recurring revenue. A team making a game that measures children’s brain activity to assess development has been offered a helpful medical-research contact—and Blank has hurled criticism at a flailing “healthcare to your doorstep” team.

“How many people from your team showed up this week for office hours?” he demands of the team. “One? Did anyone ask to reschedule? I’m about to throw you out of the class and you’re going to fail. Why don’t you sit down and then we’re going to decide what we’re going to do next.”

The TrueCare24 team were victims of a planned ambush. “The teaching team had pre-calculated we were going to make an example out of them,” Blank says. “There was no malice involved. These guys were adrift, not asking for help, and all over the place.”

Tough love can be helpful, instructor Jim Hornthal says. “One year we did it, three years ago, they went from the worst team to an amazing team,” Hornthal says. “They found God. It was magic.”

Adds Blank: “We don’t know if this one’s going to be magic, but we don’t put up with crap. Rule 1 is always hang one team publicly. Rule 2 is you never want to be that team.”

Over the next week, however, team TrueCare24 met with every instructor, talked to two dozen potential customers, and then knocked their class presentation out of the park. “They were spectacular,” Blank says.

A Gender Scorecard for Business Schools