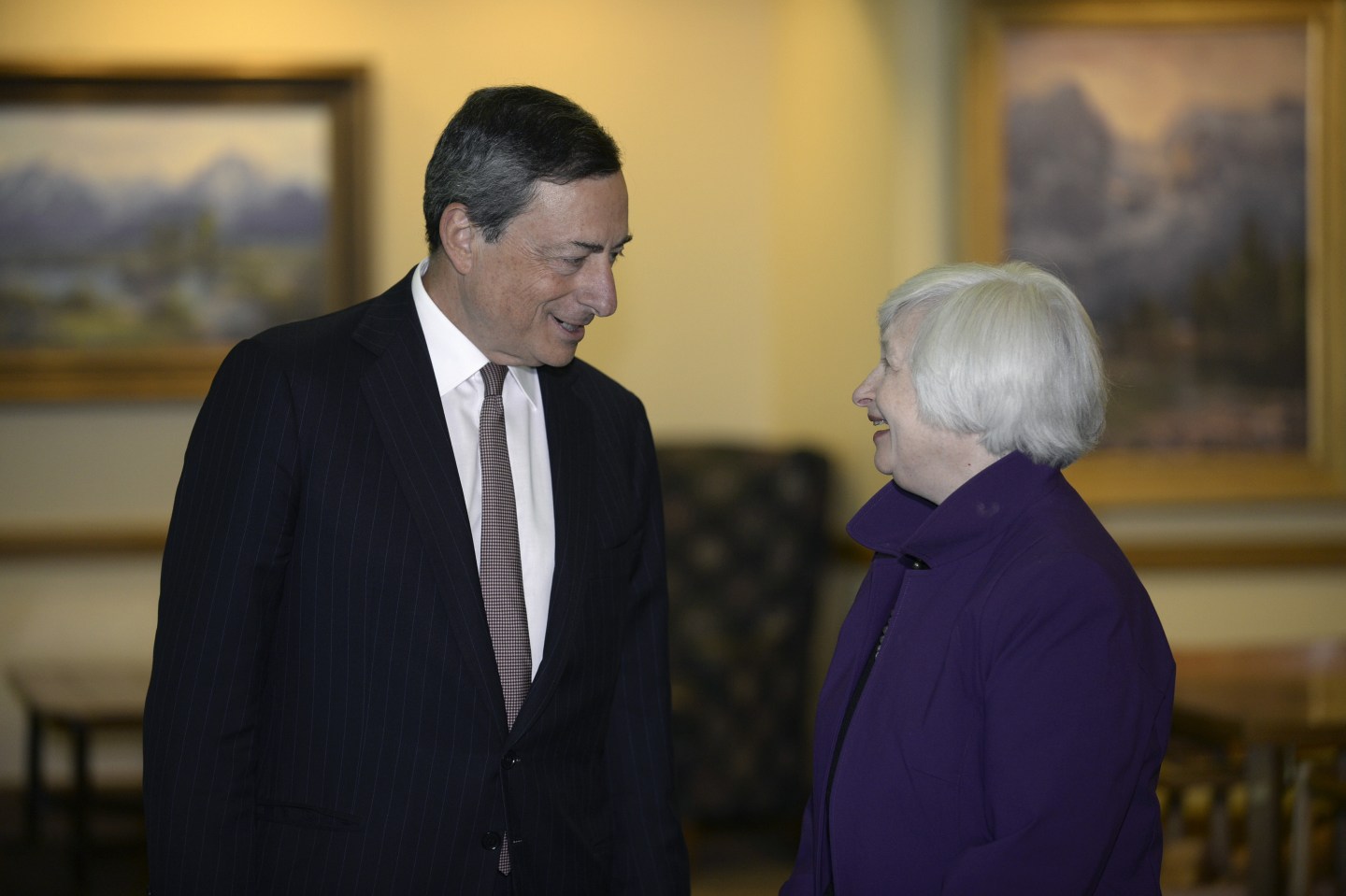 Janet Yellen, chair of the U.S. Federal Reserve, right, speaks with Mario Draghi, president of the European Central Bank, during the Jackson Hole economic symposium, sponsored by the Kansas City Federal Reserve Bank, at the Jackson Lake Lodge in Moran, Wyoming, U.S., on Friday, Aug. 22, 2014. Yellen said "the labor market has yet to fully recover, in a speech today at the Kansas City Feds annual conference. Photographer: Bradly Boner/Bloomberg via Getty Images
Photograph by Bradly Boner — Bloomberg via Getty Images

Wall Street stock futures are lower this morning, while the dollar is also at a two-month low after global markets push back their expectations for the first Fed rate hike.

Time Warner Cable reported its quarterly earnings before the market opened. The company is less than a week removed from seeing its $45 billion sale to Comcast fall apart. Other companies reporting earnings today include oil giants Exxon Mobil and ConocoPhillips as well as Visa, Viacom and LinkedIn.

Today’s must-read story is by Fortune‘s Dan Primack and Adam Lashinsky: Would Microsoft buy Salesforce.com? It looks at reports that cloud computing giant Salesforce.com is up for sale, with cloud-hungry Microsoft among the potential suitors.

Here’s what else you need to know about today:

The dollar has fallen to an eight-week low against the euro after weak GDP data prompted markets to push back expectations of when the Federal Reserve will hike interest rates. The Fed didn’t encourage that thinking, saying that the 1Q slowdown was likely ‘transitory’. Meanwhile in Europe, the ECB propelled the euro higher by suggesting the Eurozone’s flirtation with deflation was over.

The results come less than a week after the demise of its massive $45 billion sale to rival Comcast (ETB). The deal fell apart after it appeared likely to meet staunch opposition from U.S. regulators. But Time Warner Cable (TWC) might not be without a suitor for long. As Fortune wrote last week, the company is likely to attract interest from various potential buyers, including Charter Communications.

Two of the largest U.S. oil companies, Exxon Mobil (XOM) and ConocoPhillips (COP), will reveal their respective first-quarter earnings before the market opens today. It is expected that both companies’ earnings suffered again from the massive drop in crude oil prices. While crude prices have rebounded slightly in the current quarter, they reached five-year lows in January, dropping below $50 a barrel. Both Exxon and ConocoPhillips could unveil cost-cutting measures to improve their immediate outlooks. If results from European groups like Shell, BP and Total are any guide, the majors will be able to cushion some of the impact through their downstream operations.

The world’s largest credit card company gets as much as 8% of its transaction volume in the U.S. from motorists buying gas, so low prices at the pump could weigh down second-quarter profits for Visa (V), which reports its earnings after closing today. However, Visa is also expected to receive a boost from increased cross-border transaction fees, much like rival credit card company MasterCard did in its own quarterly earnings on Wednesday.
[fortune-brightcove videoid=4192169452001]

5. Tesla looks to enter your home.

Tesla CEO Elon Musk teased a “major new Tesla product line” that is set to be unveiled today. The new products are expected to be solar-powered battery packs with the capacity to power an entire home. The grid batteries — which Fortune said Musk has been working on for roughly five years — could help Tesla (TSLA) expand beyond the electric car business while allowing customers to store solar energy for use in their homes.