The long and quiet history of Tesla’s grid batteries 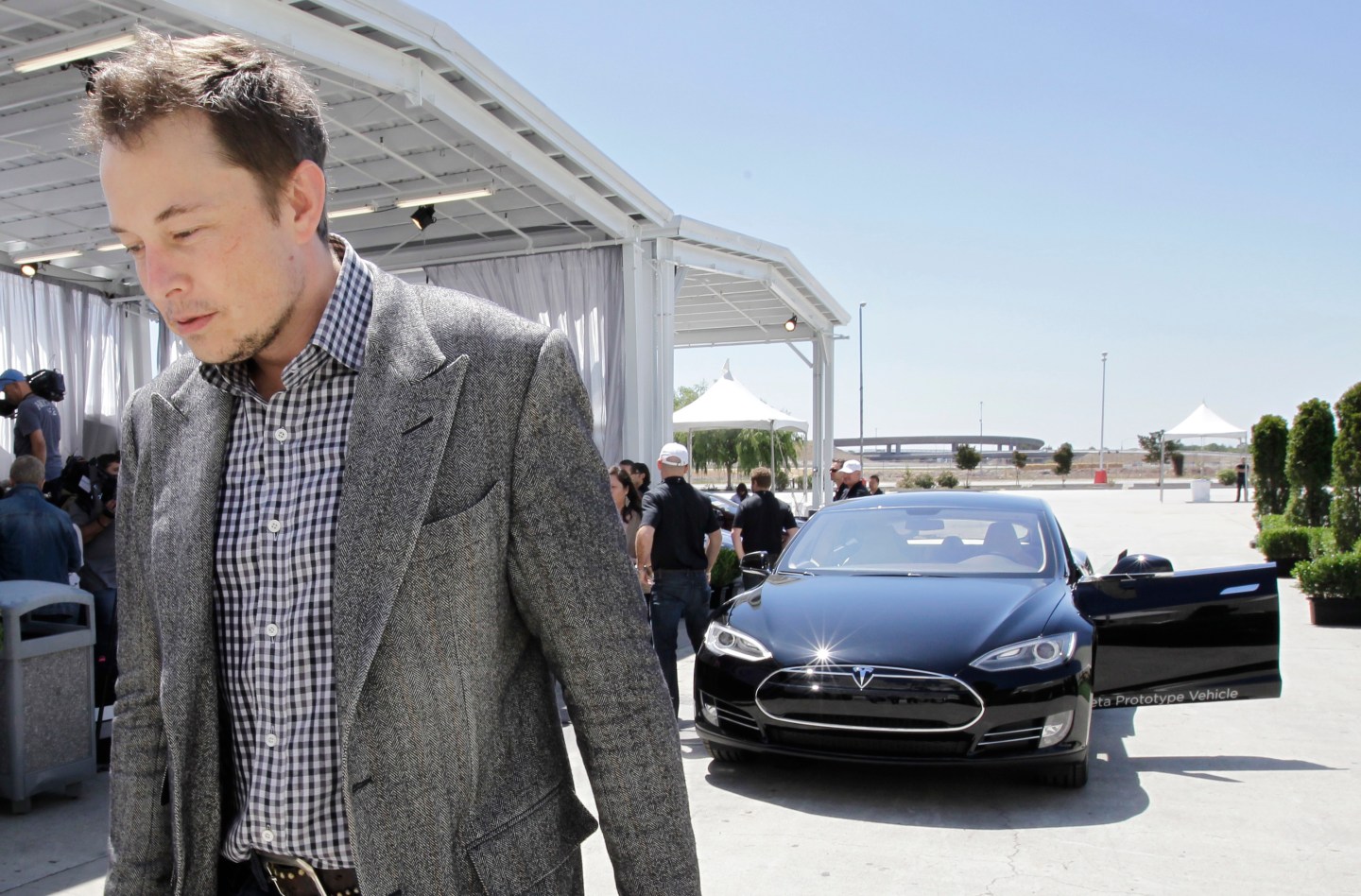 Tesla CEO Elon Musk walks past the Tesla Model S after a news conference at the Tesla factory in Fremont, Calif., Friday, June 22, 2012. The first Model S sedan car will be rolling off the assembly line on Friday. (AP Photo/Paul Sakuma)
Photograph by Paul Sakuma — AP

By now it’s not really a secret that on Thursday, Tesla Motors will likely show off battery packs that can be paired with solar panels, and plugged into the power grid. But what seems to be lesser known is the long history behind this announcement: That Tesla (TSLA) has been working on grid batteries for many years now and already has hundreds of systems in operation.

About five years ago, in late summer 2010, co-founder and chief technology officer of solar system installer SolarCity Peter Rive—cousin of Tesla CEO Elon Musk—was tinkering with a lead acid battery pack in his garage in San Francisco. That year, the California Public Utilities Commission awarded SolarCity (SCTY) $1.8 million to study how feasible it was to store energy generated by solar panels on a rooftop in a battery at the base of the building. The grant was meant to deploy and monitor a handful of projects that used Tesla’s batteries combined with solar panels and SolarCity’s monitoring systems.

The next year, Tesla began requesting incentives for its energy storage projects from California’s Self-Generation Incentive Program. More than a decade old, the state program is intended to provide funding for emerging distributed energy systems such as fuel cells and advanced energy storage projects. While some of Tesla’s early, small energy storage projects—residential systems—didn’t eventually receive the funding, some of those early commercial-scale projects ended up with funding and were later connected to the power grid.

In 2012, I was one of the first to report that Tesla and SolarCity were quietly working on selling both residential and commercial scale building battery systems. At the time, the duo had submitted at least 70 applications for SGIP funding.

Later that year, at a conference in Las Vegas, Elon Musk told an audience that SolarCity had been working with Wal-Mart (WMT) to install battery systems, paired with solar panels, at its stores. SolarCity told me at the time that the projects were in the “pilot stage” and that SolarCity expected to install batteries at up to 10 Walmart stores by early 2013. (Bloomberg reported last week that the retailer now has Tesla batteries at 11 of its stores.)

Fast forward to 2014 and you’ll find Tesla ramping up its energy storage plans. The SGIP now says it’s on track to deliver $65 million in funding for Tesla energy storage projects from its 2014 budget, which totals $165 million, according to a program spokesperson. Tesla’s projects therefore take up just less than half of the budget for last year.

According to another Bloomberg report from last week, there are now 300 homes in California that have Tesla batteries and SolarCity solar panels. One of the biggest hurdles for these early residential projects was just getting the local utilities to connect the systems to the power grid. Utility companies are naturally slow moving, but the sudden influx of distributed generation and storage caught them off guard. Five hundred customers originally signed up to buy the batteries through the two companies; connection delays at one point in spring 2014 were so bad that SolarCity started publicly complaining about the issues.

According to the most recent data available, Tesla has close to a hundred energy storage projects that have requested funding from the 2015 SGIP budget. In contrast to the residential-focused smaller systems from its early partnership with SolarCity, many of the more recent energy storage projects are much larger, up to 1 MW in size, for commercial and government partners. Musk said on Tesla’s earnings call in February that Tesla has already been “bidding on a lot of RFPs [request for proposals],” for utilities looking to build energy storage projects.

So why has Tesla slowly ramped up its energy storage projects, and brought in many more large-scale systems in recent months? And why is Tesla potentially launching a home battery and a larger utility battery now?

One major reason is because of California’s energy storage mandate, which says that the state’s utilities need to buy more than a gigawatt of energy storage services by 2020. This mandate has led to some large grid storage deals for smaller companies like Stem, Green Charge Networks, and Advanced Microgrid Solutions. While California is the first state to do this in the U.S., other states could follow suit and help open up the market for grid storage even more.

Utilities are interested in energy storage not just because of the mandate, but also because it can help them avoid building “peaker plants”—expensive and often dirty power plants that are used to push electricity out to the grid when it’s really crucial, such as during a hot summer day when air conditioning is flowing. Batteries can provide this quick electricity push instead. And in the short term, batteries are also being used for other services for utilities, like something called frequency regulation, which maintains grid stability.

One of the reasons that batteries are becoming more attractive to utilities, businesses, and even homeowners? Solar energy. Such systems are cheaper than ever before, making the technology accessible and attractive to many more customers, and batteries pair naturally with solar systems, which can generate electricity during the day that can then be stored in a battery and used at night when the sun stops shining. Many of the battery systems that will be deployed in the coming years will be paired with solar systems.

Lithium-ion batteries—the kind used by Tesla in its electric cars—are also rapidly declining in cost. Tesla’s battery factory, which is under construction just outside of Reno, is intended to lower the cost of the company’s lithium-ion batteries (made in partnership with Panasonic) by one-third. Historically, lithium-ion batteries have been considered too expensive to be used for a home battery or for the grid. Declining prices alter that calculation.

And from Tesla’s perspective, it’s a good idea to diversify beyond manufacturing only electric cars. Engaging in the battery business reduces its risk of lower demand for electric cars (in the event of, say, low gas prices) or delays in production. Power grid batteries could be a very large market for the company—perhaps even larger than its core electric car market. According to GTM Research, energy storage in the U.S. could triple just in 2015 alone, and could grow from $128 million in 2014 to $1.5 billion by 2019.