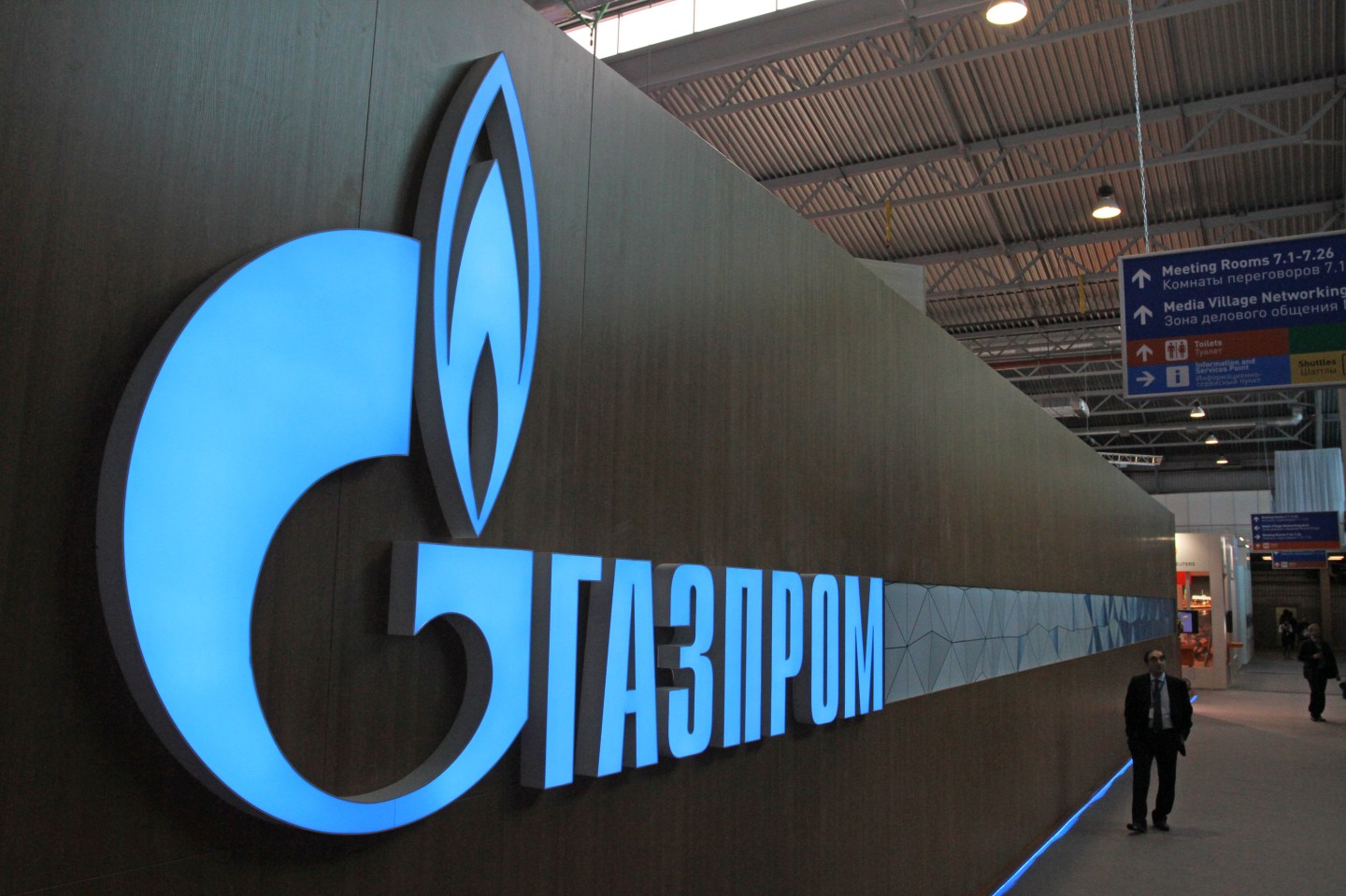 The world’s biggest natural gas producer is paying the price for being an instrument of the Kremlin’s foreign policy.

OAO Gazprom’s net profit for 2014 fell the equivalent of $19 billion to 159 billion rubles ($3.06 billion at current exchange rates, a drop of 84% from RUB1.166 trillion in 2013, as it was forced to book a huge rise in the ruble-value of its foreign debts and write off much of the money it is owed by neighboring Ukraine.

It may be true, as President Vladimir Putin said two weeks ago, that the worst was over for the country’s economy: the ruble has stabilized, allowing the central bank to relax its chokehold on credit. But for Gazprom it’s going to be a slow, hard recovery: the money it gets from its key export contracts to Europe is tied to oil prices, with a lag of around six months. That means that a sharp fall in revenue for this year is as good as bolted on.

In some ways, the figures are better than they seem at first sight. The biggest factor in the slump, a 925 billion ruble loss on foreign exchange, was a result of a quirk of accounting rules with no cash effect. Some of that will already be reversed in its first-quarter earnings because the ruble has rebounded by over 10% since the end of last year. And in any case, net debt is still less than last year’s earnings before interest, taxes, depreciation and amortization.

The bigger, and chronic, problem is that the company is having to service those debts from a narrowing sales base: the 444.9 billion cubic meters (15.7 trillion cubic feet) that it produced last year was down 9% on the year, the lowest in its two decades as a joint-stock company, and nearly a third below what it was producing a decade ago. European customers cut their demand by 15 billion cubic meters last year, or 8.5%, while sales to the former USSR (mostly Ukraine) fell by 19%, or over 10 bcm. It’s no exaggeration to say that they will prefer any alternative source of gas (except maybe the shale under their own feet) to Gazprom’s as long as economics will allow them to.

Against a background of falling revenue and little love from financial markets (it isn’t under E.U. or U.S. sanctions, but few western investors want to rack up more exposure to it in the current environment), Gazprom is having to find an estimated 770 billion rubles ($15 billion at current exchange rates) to build a vast new pipeline to China. But Beijing’s state-owned lenders have also played hardball with it, refusing any substantial pre-financing, in sharp contrast to their usual willingness to pay for long-term infrastructure that fits into the national development strategy.

Ultimately, the Russian government is likely to fund that pipeline, drawing down reserves from its National Welfare Fund. In the meantime, though, it’s still milking its cash cow: the government-controlled board, one eye on a widening budget deficit, has insisted on keeping the dividend at 2013’s level of 170 billion rubles.

But Gazprom’s biggest headache is still Ukraine, and Russia seems determined to make it an even bigger one. War has not only triggered a bitter row over previous late payments, but also crushed a major customer’s ability to pay. (The World Bank expects the Ukrainian economy to shrink by 7.5% this year, after 14.8% last year.) It doesn’t help Gazprom that most of its biggest end-users in Ukraine were in the heavy industrial belt of the Donbass, where the fighting is concentrated. The Ukrainian market, which should by all rights and commercial logic be the company’s most profitable, is dead for the foreseeable future.

Most of Gazprom’s gas supplies to the E.U. still go through Ukraine, but management (who got a 94% pay raise last year in recognition of their sterling efforts) now want to spend billions more on a new route that will bypass both it and Belarus, another troublesome transit country. By 2018, it wants to have built enough new capacity to take Ukraine out of the equation, with a new pipeline under the Black Sea, to Turkey and on to a point on the border with Greece, at which point it can say it has fulfilled its contractual obligations to customers in the E.U..

Europe is hoping that is just bluster, and that the immense cost and the execution risks will force Gazprom to keep pumping through Ukraine instead. But tempers are running high after the last 14 months, and haven’t been improved by the E.U. formally accusing Gazprom of price-rigging last week.

With oil prices appearing to have bottomed, Gazprom should already be pretty confident that its fortunes will bottom out this year. But whether politics will allow them to is another matter.