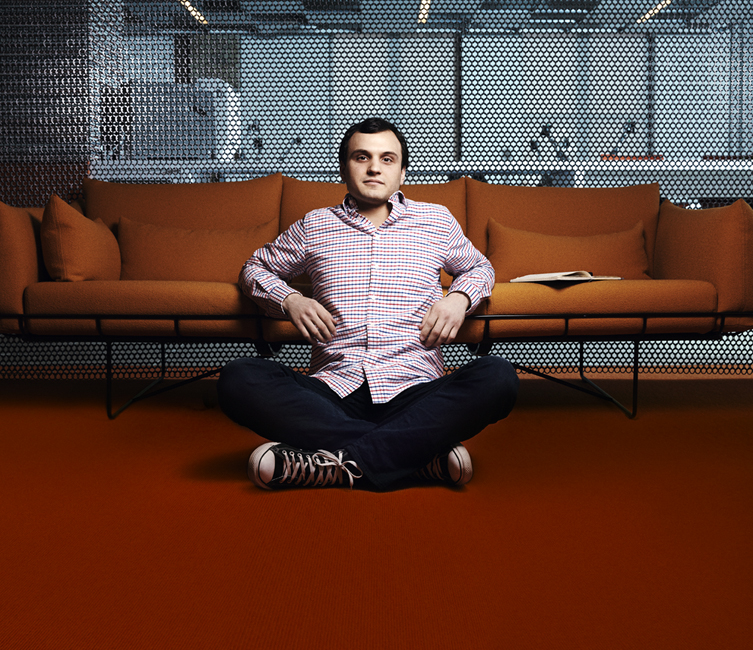 Phillip Honovich spends his days like any worker at a startup. He tests software, hustles for clients, and collaborates with a nine-person team inside a sleek open-plan office in the tech sector of New York City. Failing fast is encouraged.

But Honovich doesn’t work for a startup. He’s one of 10,000 people employed by MasterCard (MA), which has $9.5 billion in annual revenues. Honovich, 25, planned to work for a young outfit or found his own company after graduation from Manhattanville College three years ago. Instead, 50-year-old MasterCard lured him to help build a platform called ShopThis, which lets people buy products directly from a digital magazine page without leaving the page. It’s one of dozens of mini-companies inside MasterCard Labs’ three-floor New York City office, which opened in September. “It feels just like a startup,” Honovich says.

That’s the idea. In the past two years giant corporations such as Coca-Cola (KO), MetLife (MET), General Electric (GE), IBM (IBM), Mondelez International (MDLZ), Cisco (CSCO), and Tyco International (TYC) have started taking cues from the startup and venture capital world. (A few others, including MasterCard and American Express (AXP), launched such programs in 2011.) They’re holding innovation contests and using panels of executives to dole out investment dollars to fund internal startup ideas.

Unlike special skunkworks projects of the past, intended to hive off a single project into its own unit, these efforts are intended not only to ­nurture profitable new entities, but also to infuse entrepreneurism into venerable operations filled with layers of middle managers.

It’s too early to tell whether the approach is working. Most of the efforts are nascent, the baby enterprises mere months old or not yet born. Optimists would say this will allow some decades-old enterprises to sip from a fountain of youth. A pessimist might worry that it’ll be the corporate equivalent of middle-aged parents donning tight clothing and awkwardly twerking to demonstrate to their horrified teenagers that they’re keeping up with the times.

For now, the Silicon Valley mind-set is in. GE has enlisted 500 coaches to train executives to embrace concepts like risk taking and learning from failure. Mondelez sends its brand managers to work inside partnering startups to learn how they operate, while Tyco, the fire and security giant, invites venture capitalists to speak on behaving like a startup. “It’s the new way of working that eventually every large company will embrace,” says David Butler, Coca-Cola’s vice president of innovation.

Beyond becoming more agile, the companies want to discover the entrepreneurs already in their ranks and lure new ones. At least 90% of millennials say they would rather work at a startup than a corporate giant, according to James Canton, a futurist and author of Future Smart: Managing Game-­Changing Trends That Will Shape the World. “There is a fierce war for talent,” he says, “and a startup has a feeling of newness.”

It’s not that big companies don’t get what startups do, says Coca-Cola’s Butler. It’s just that replicating the unstructured, unfettered moves of, say, a five-person outfit is difficult to do with the systems and vast teams needed to operate on a global scale. “Big companies tend to hire managers, not explorers,” Butler says. “You tell them to do this and keep doing it, not explore new ways to do it. Early-stage companies employ nothing but explorers.”

A former entrepreneur who co-authored Designed to Grow: How Coca-Cola Learned to Combine Scale & Agility, Butler has led a companywide effort to teach managers how to become explorers. They imbibe the principle of collaboration. They create one-page business plans instead of lengthy PowerPoint presentations. They develop minimalist product prototypes quickly and cheaply to test their assumptions. They give two-­minute spiels at “pitch parties,” and attend “failure conferences.” (Like GE, Coke has embraced the hottest management vogue in Silicon Valley today: a near veneration of failure and the lessons that can be drawn from it.)

The $46 billion beverage company is teaming with outside entrepreneurs to develop ideas that can solve problems at the company. One example: Wonolo, an Uber for temporary workers who can, for example, restock Coca-Cola brands at stores on demand. “It’s a billion-­dollar challenge for us,” says Butler.

A similar movement is underway at General Electric. A company famous for abiding by strict Six Sigma quality standards and forced performance ranking is de-emphasizing the former and going so far as to test the notion of eliminating those rankings. The goal, it seems, is not to let measuring effectiveness become so all-consuming that it impedes effectiveness. (For more on GE, see Anatomy of a Trade in this issue.)

To look more like a startup, the $149 billion company is knocking down walls at its Fairfield, Conn., headquarters and creating collaborative open workspaces. Even CEO Jeffrey Immelt turned his dining room into what the company calls an innovation hangout, with Ikea couches and high-top tables, and whiteboards. “It’s about giving people the environment to think in a different way and getting people to take risks,” says Goldstein. “I can say this is the most unbelievable experience, and I’ve been with GE for 20 years.”

In just 15 months GE has funded 500 projects proposed by employees to “growth boards,” groups of top executives who hear pitches, award funding, and give the go-ahead for a team to develop and test ideas in a 90-day sprint. If a project flops, she says, managers learn and change course.

One GE project is a 31-person startup seeking to commercialize a cheaper, cleaner form of solid oxide fuel cells, which convert natural gas into electricity. It was proposed by GE research leader Johanna Wellington, who has her own board of directors, funding milestones, and full decision-making power. “We have the same ­agility of a startup,” she says, “and it could have a huge impact on the bottom line long-term.”

At MasterCard, which has held count­less innovation contests and workshops on agility in ­recent years, the efforts have yielded tens of thousands of ideas and dozens of mini-startups, including ShopThis and a smartphone app for Whirlpool that lets people pay for and monitor their laundry remotely at laundromats. MasterCard has also boosted millennial hires: Those young workers now constitute 38% of its employees, up from 10% in 2010.

A crucial missing piece of these programs is equity. Ownership and the possibility of striking it rich are central in the startup realm. Large companies are still trying to figure out how to give incentives to salaried employees.

Cisco Systems successfully built three companies using a “spin in” model, which includes developing the idea, infusing the startup with cash, and sending it out on its own—with the option to buy it back in the future. But the model elicited gripes among nonparticipating Cisco employees, who don’t get the same opportunities to cash in. For its part, MasterCard gives $250,000 prizes to the teams that come up with the best idea in its innovation contest.

Garry Lyons, MasterCard’s chief innovation officer, acknowledges the trade­off for corporate entrepreneurs. Yet he says they have a better shot at success and far less financial and personal risk. Companies like Master­Card can offer the infrastructure, manpower, finances, and brand cachet to open doors. “It’s more than financial incentives,” he says. “It’s the motivation to do something interesting and get access to brand credibility and our network. It’s like their own business inside our walls.”