The weather ate my returns 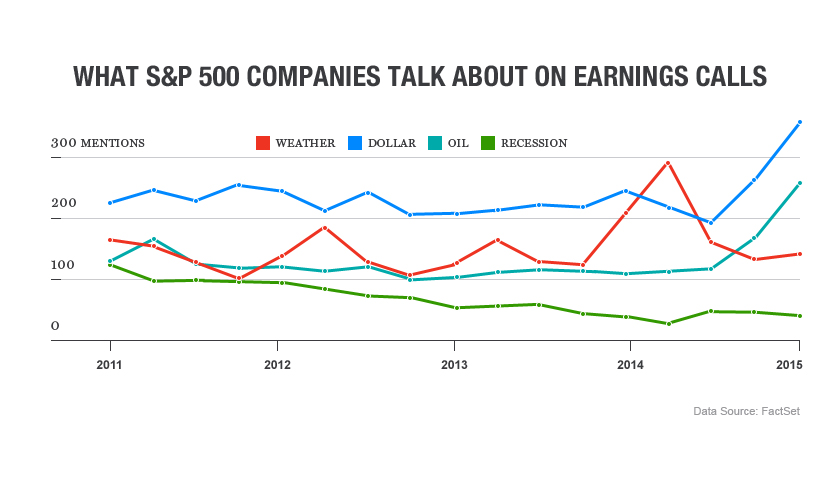 As companies report earnings from the first three months of 2015, they’re spending more time complaining about the weather than coworkers making small talk in an elevator. Just this week, companies have blamed a host of scapegoats for their weaker-than-expected results—including February blizzards, cheaper oil prices, and especially the stronger U.S. dollar, which has taken a bite out of many a balance sheet.

Think of it as the boardroom version of “the dog ate my homework” line. Indeed, with dramatic declines in both the price of oil and the value of foreign currencies versus the U.S. dollar, U.S. corporations have been pointing a lot of fingers lately as they explain why much of their performance was beyond management’s control.

And those aren’t the only excuses that executives have come up with. Tesla (TSLA), for example, recently said it was unable to deliver the cars it promised due to its “customers being on vacation,” (in addition to the bad weather). Huh? On the other hand, many companies attributed a bump in first-quarter sales to the simple fact that Easter fell earlier than usual this year.

We asked FactSet to tally how many S&P 500 companies cited certain macro trends in their earnings calls, and the results were striking: More than half of the index discussed “oil” last quarter, which is at least double the amount that brought it up during the same period over the last several years. At the same time, only 41 companies mentioned the recession, down from 124 who did in 2011.

The winter chill, meanwhile, is a particularly convenient excuse for poor earnings performance. Companies mentioning “weather” spiked to a total of 290 in the second quarter of last year as they reported the impact from the frigid “polar vortex”—which 23 companies, or nearly 5% of the S&P 500, cited specifically that quarter, up from zero in any year before 2014.

It’s too early to tell whether the current quarter will show a similar spike in weather mentions once companies report their January-to-March results. But so far, it looks likely, as April showers have brought…more griping about the winter. Companies have blamed it for a variety of bad results—from disappointing fast casual turnout (Chipotle (CMG), saying, “Our sales typically come roaring back after a big snow storm … but the weather impact this year lasted for many weeks”) to lower motorcycle sales (Harley Davidson (HOG)) to dozens of store closures (Under Armour (UA)) to a 21% drop in profit (Travelers Companies (TRV), which cited “the polar vortex last year and the extreme snowing cold”). And that’s just a sample from the last few weeks.

The strengthening U.S. dollar, however, is clearly the hot topic: a total of 349 companies talked about it last quarter, which is roughly 100 companies more than the number that mentioned “dollar” in any other quarter since 2011. On Thursday, several major companies quantified just how big an effect the strong dollar was having on their business. PepsiCo (PEP), for one, said it expects the exchange rate to shave 10 percentage points off its full-year revenue growth, and a whopping 11 percentage points off core earnings per share for the year. And Procter & Gamble (PG) reported a 17% decline in profits—but profits would have grown if not for the foreign exchange rate, the company said. Novartis (NVS), for its part, “got completely crushed by the strong U.S. currency,” wrote Edison Investment Research analyst Maxim Jacobs.

To be sure, experts on corporate doublespeak caution that our analysis of earnings transcripts isn’t perfect, and probably captures companies that weren’t actually blaming the exchange rate or the snow, but mentioning them in a different context. “They’re using words about the economy, or words about weather, but how they are using them becomes the key to determining whether or not there’s any real relationship between the use of the word and the fact that it’s an excuse,” says Brian Bruce, CEO and chief investment officer of Hillcrest Asset Management, which analyzes the text (and word choices) in earnings transcripts as part of its investment process. “Is weather mentioned in a positive way? Is it negatively related, or did they just happen to mention, ‘Our board meeting was held on a nice sunny day?’”

Certainly, headwinds for some companies were tailwinds for others: While oil companies are reeling from cheaper crude prices, airlines like Delta (DAL) are padding their bottom lines with fuel savings. And as some lamented that weather kept shoppers away from stores, Rite Aid (RAD) sung the praises of “an increase in cold and flu-related incidents.”

Still, it’s hard to believe that companies mentioning the “polar vortex” were talking about a boon to profits. And new research suggests that corporate earnings excuses could be a red flag to investors. A 2014 study by Emory University researcher Dexin Zhou, titled “The Blame Game,” found that the more corporate executives blamed poor performance on external factors, the less their stocks returned in the future.

Eric Schoenstein, a portfolio manager of the Jensen Quality Growth fund, however, gives his companies a pass when they justify that the weather, or another factor, really was at fault. “It’s not just, did they blame the weather, but did it make sense that they blamed the weather? Does it stand to reason that weather could have impacted the business?” he says. “I wouldn’t expect a technology company to blame the weather.”

An abbreviated version of this article appeared in the May 1, 2015 issue of Fortune magazine.