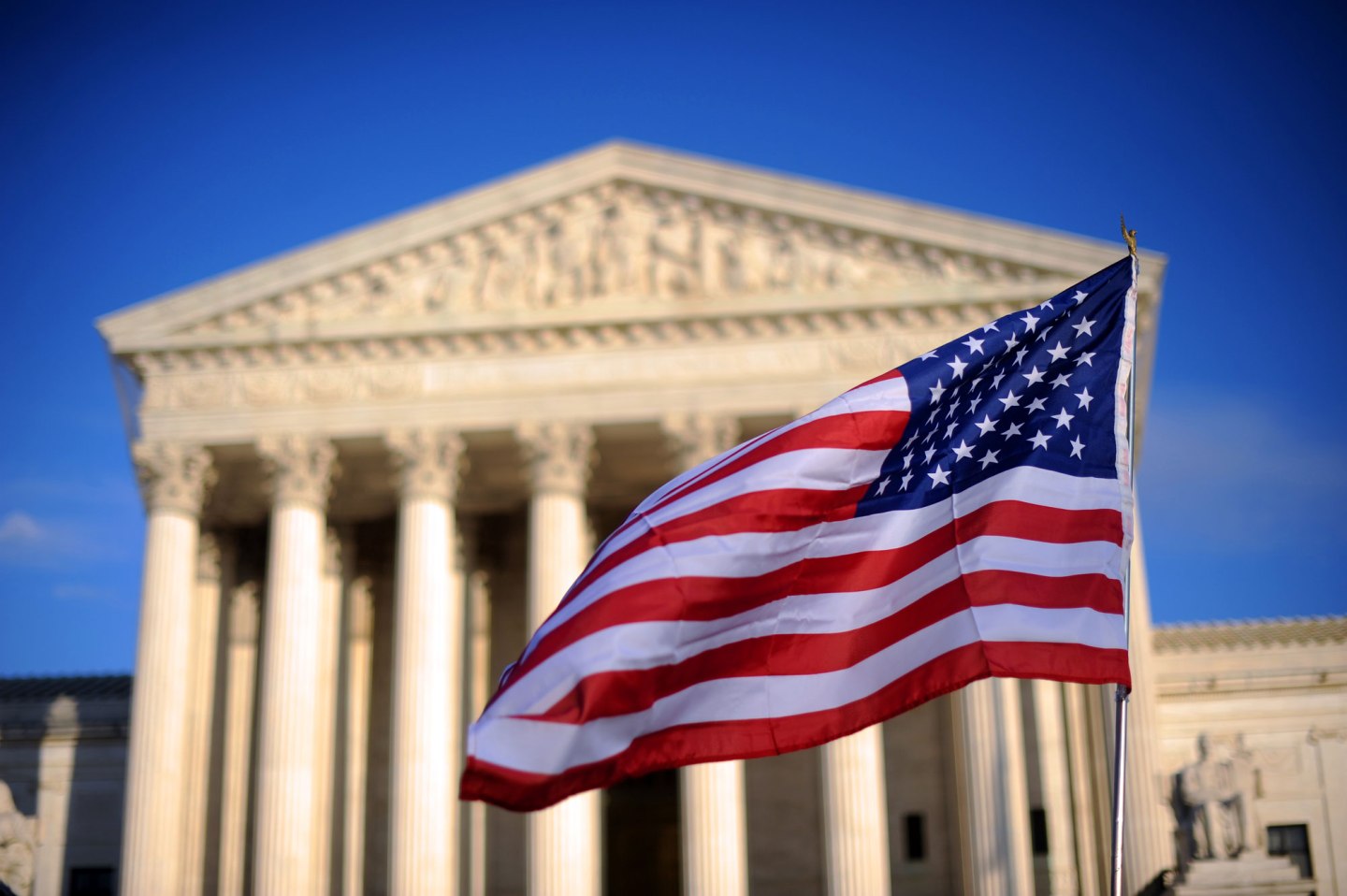 A US flag is held by a marcher in front of trhe Supreme during the March for Life on January 24, 2011 on Capitol Hill in Washington, DC.The march marks the 38th anniversary of Roe v. Wade (officially Jan. 22), a landmark Supreme Court decision that legalized abortion. AFP PHOTO / Tim Sloan (Photo credit should read TIM SLOAN/AFP/Getty Images)
Photograph by Tim Sloan — AFP/Getty Images

Less than a week before the United States Supreme Court considers whether the U.S. Constitution gives all Americans the right to enter into same-sex marriages, two members of Congress are calling attention to the court’s ethical rules or—more specifically—the lack thereof.

Every judge in America must abide by a code of ethics, except for the nine justices that make up the nation’s highest court.

The Supreme Court has no official ethics rules, which means the justices are free to engage in political activity, speak at fundraising events, or become a member of a club that discriminates based on race, sex, or religion, if they so choose.

Senator Chris Murphy, a Democrat from Connecticut, and Congresswoman Louis Slaughter, a Democrat from New York, want that to change. On Thursday, they introduced a bill that calls on the high court to adopt a code of ethics.

“There is absolutely no reason why Supreme Court Justices shouldn’t be subject to the same code of conduct as all other federal judges,” Murphy said in a statement. “This bill will make the court more accountable and more transparent, and will help guarantee the integrity of our country’s highest court.”

Murphy’s statement said “recent instances of dubious ethical behavior,” such as justices allowing their names to be used to promote political fundraisers,” prompted the bill. He also said that “the court’s recent pattern of siding with powerful corporate interests” has also “raised concerns among many observers.” Last term, the justices ruled 5-4 that the government could not force corporations with religious owners like craft store Hobby Lobby to pay for health insurance coverage of birth control. The court under Chief Justice Roberts is also responsible for the controversial Citizens United v. Federal Election Commission ruling that gave the green light to corporate spending on elections.

The bill introduced Thursday is not the first attempt to bind the nine justices to formal ethics rules. A bill with the same objective was first introduced in 1973. According to Murphy’s statement, to date more than 130,000 Americans have signed a petition asking Roberts to adopt a code of ethics for the Supreme Court, and in 2012, 212 legal scholars jointly encouraged the Supreme Court to adopt the Code of Conduct of U.S. Judges.

In his year-end report on the federal judiciary in 2011, Roberts wrote that the justices “consult” the Code of Conduct “in assessing their ethical obligations.” They also refer to judicial opinions and disciplinary decisions, and seek advice from the court’s legal office. For these reasons, he said, “there is no reason to adopt the Code of Conduct as its definitive source of ethical guidance.”
[fortune-brightcove videoid=4192534496001]