How one MBA went from Lehman Brothers to high-pressure juice 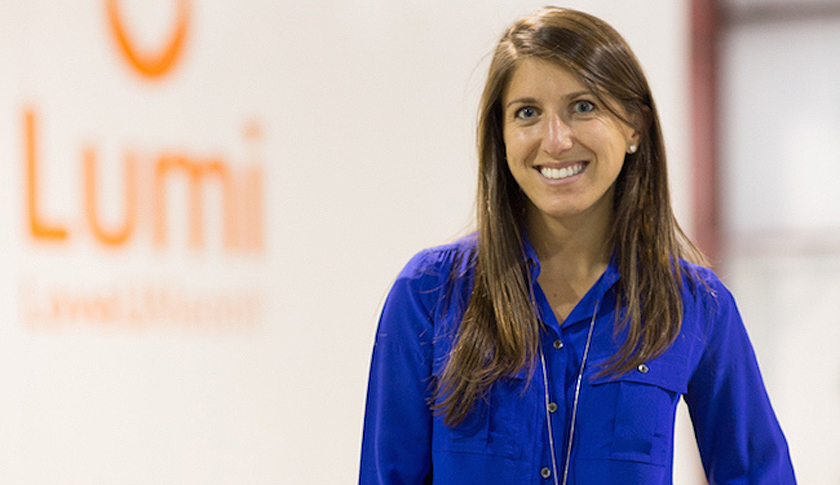 (Poets&Quants) — Hillary Lewis awoke on a clear September morning in 2013 in Charlottesville, Va. with an awful feeling. She’d overslept to 7:30 a.m. (she usually rises at 6:00 a.m.), and she was expecting the biggest delivery of her life — quite literally.

A “Wide Load” truck with a 35,000-pound high-pressure processing (HPP) machine was barreling down the highway toward Charlottesville as she lay in bed racking her brain. What was missing?

The crane company had never called to confirm. Was it coming? The HPP machine team had flown in from Spain to oversee the installation — the electrician, plumbing, and refrigeration guys were all at the warehouse twiddling their thumbs. She was paying for the flatbed truck by the hour, but without the crane, there was no way to move the machine off the truck and into the new headquarters of her startup. Everyone would be idle while her first serious capital injection dripped away, minute by minute.

Lewis, a 2013 UVA Darden MBA, was in the process of launching Lumi Organics, a startup that produces all-natural juices and pasteurizes them with high-pressure processing, instead of the standard heat or chemical processes that often destroy key nutrients. Lumi (shorthand for “love you, mean it”) cold-presses two pounds of organic fruits and vegetables into each 16-ounce bottle. The processing method is a key differentiator in a crowded marketplace, according to Lewis. High-pressure processing is particularly effective for preserving vital enzymes and nutrients, she explains.

The Spanish overseer from the HPP installation team demanded to see the man in charge. The then-27-year-old Lewis piped in, “I’m the women in charge.” The overseer mumbled a Spanish expletive under his breath.

The crew crowded around Lewis and bombarded her with questions: Was the crane coming? When? How long would it take? “I look at all these guys that were older than me and was like, ‘Listen, it’s not helpful for anyone to be freaking out right now; there’s nothing we can do about it besides find a solution, so I need everyone to calm down,'” she recalls.

Unfazed, Lewis started calling every crane company in the area. She was determined to find the right one or at least someone to come lift the machine off the truck.

Lewis, now 29, isn’t one to bend to pressure. In fact, her first foray into business after graduating from Penn State in 2008 had prepped her for pressure-cooker situations. After collecting her diploma, she moved to New York City and joined Lehman Brothers.

Her first week at the desk, the firm went bankrupt. “It was tragic for the amount of money people lost all around the world, but it was a really interesting learning experience. It forced me to have responsibility straight out of the gate at Barclays after they acquired Lehman,” she recalls.

So while the men around her grumbled about the crane, Lewis kept calm and dialed on. “Freaking out about something doesn’t get you anywhere … you have to be cool, calm, and collected,” she says.

She worked as an analyst for nearly two years at Barclays before joining Avenue Capital Group in 2010 as an associate. There, Lewis worked with teams to turn around “distressed companies.” Still, something was missing. “At the end of the day, I didn’t feel like my day-to-day work was very rewarding, and I wasn’t doing something that was necessarily improving other people’s lives,” she recalls.

Lewis decided to earn an MBA. In her essays, she laid out three goals: 1. Start my own company 2. Use U.S. manufacturers 3. Provide some sort of public service. In 2011, she enrolled at the University of Virginia’s Darden School of Business determined to launch her own enterprise.

Lewis dived into the school’s entrepreneurship activities. Her first year, she attended the Jefferson Innovation Summit and remembers being inspired by John Mackey, the co-founder and co-CEO of Whole Foods Market. For her summer internship, she worked for Altamar Brands, a spirits startup, while subletting a room in a friend’s Boston apartment. Her bosses were on either coast, leaving her to find her own way and set her own schedule, an experience she says prepped her for running a company solo.

Despite driving hard for entrepreneurship from the get-go, Lewis still experienced doubts. “I was applying for consulting roles, and I remember being in an interview with BCG or Bain, it was one of the two, and the person I was interviewing with just looked at me and asked, ‘Why are you here?’ I was like, ‘Why are you asking me this question in an interview?’ But it was a good question. It made me stop and think about what I really wanted to do,” she says.

Lewis left the interview and reread her B-school admissions essays. She knew what she wanted to do: start her own company.

Now to figure out what that was …

Lewis was shopping at a Charlottesville Whole Foods in April 2013. She spotted a juice company from New York that she recognized from her days on Wall Street. They were selling 16-ounce bottles of high-pressure-processed juice for $9.99 — in Virginia. She bombarded the buyer stocking shelves with questions. She found out that the store could barely keep them in stock.

Lewis couldn’t believe it. She bought five bottles. “That was like a one-minute moment of truth in the Whole Foods shopping aisle,” she recalls. “It was the most expensive trip to Whole Foods I’d ever made.”

She brought the juice to Darden Professor Casey Lichtendahl, a beverage industry veteran who co-founded Tradewinds Beverage Company, which was acquired by Nestlé Waters North America. Lewis explained her business proposition and pointed to the bottles as proof of the market. She would start her own high-pressure-processed juice business right there in Charlottesville. If a New York City company could do it, she could too. Lichtendahl was impressed. He jumped on board as her first investor.

Lichtendahl advised her to produce the juice in-house and urged her to get the high-pressure processing machine and a manufacturing facility, an old AutoZone warehouse in Charlottesville. “That made the stakes a lot higher and the intensity stronger. At the end of day, I had to sell product and I had to make money because I had a lot of people counting on me, and we had to cover our costs,” she recalls.

Lewis and Lichtendahl both knew she’d landed on a golden opportunity that wouldn’t wait. As a second-year MBA, she plowed ahead with her business — sinking every last second into getting it off the ground. “When everyone was enjoying their final six to eight weeks of school and all the fun trips before they started their post-Darden jobs, I was working seven days a week, 16-hour days,” she recalls.

But it was a race to secure a presence in a booming sector. “The faster I moved, the faster I could be one of the first to market …. [juice company] Suja started in May 2012 with a pretty hefty sum of private equity money behind them, and also their CEO was a former executive from Coco-Cola, and I didn’t necessarily have those things to help me along,” she recalls.

The next six months were a whirlwind. “November 7, 2013, I was on the shelf next to … the competition that inspired me,” Lewis recalls. “So it was six months from idea to fully integrated manufacturing facility to a juice on the Whole Foods shelf.”

Lewis says Darden proved pivotal in shaping her business. Even the classes that seemed like blow-offs at the time were key. “Everyone makes fun of leadership organization and interpersonal communications classes in business school, and they’re like, ‘Why is this important?’ But leading organizations and understanding interpersonal communications are the most important elements to business I think.”

For guidance, Lewis relied on Yael Grushka-Cockayne, an assistant professor at Darden who specializes in decision making and project management. “I’m literally the worst person when it comes to making lists; I work best when I have a ton of things to do,” Lewis says. Grushka-Cockayne kept her on track and pushed her to map out a 12-week plan to bring Lumi to life.

With Grushka-Cockayne’s planning prowess and Lichtendahl’s beverage acumen, Lewis managed to pull it off. Within the first six weeks, Lumi Juice appeared on the shelves of 13 Whole Foods. “All the buyers thought I was crazy because I was going in there in November and December to sell the product, and what’s in a cold case in November and December? Eggnog and pumpkin spiced latte stuff. The refrigerator is full of holiday items,” she says.

She pressed her case: The New Year’s resolution crowd would be looking to shed their holiday baggage soon. The buyers bought it — and Lumi.

Now, Lumi Juice is in all 42 Whole Foods stores in the mid-Atlantic region, 43 Safeways, and some 100 Fresh Markets across the U.S. The juice averages $7.99 for a 16-ounce bottle and $4.25 for a 10-ounce. Lewis already has her eyes on other Whole Foods locations and nationwide grocery chains; she aims to expand into more health-food items, such as smoothies.

As for the botched crane delivery, Lewis’ don’t-panic approach paid off. She eventually got ahold of the crane company, which apologized for losing her reservation and sent the equipment out immediately.

“I was just sitting on the loading dock and taking some deep breaths, and I look down the road, and all of a sudden there’s the crane and the machine on the flatbed truck directly behind it … it couldn’t have been better timing,” she recalls. “I just smiled at all the guys, and I was like, ‘See, it was no problem; it’s totally fine.'”

Later, she and the Spanish team bonded over beers. The guy who’d asked for the man in charge told her he’d been really nervous that the crane wouldn’t arrive. Lewis admitted she had her own doubts. “I was really nervous too, but I couldn’t let that show. You have to operate like it’s going to get done, that’s how a lot of things happen.”

The Most Lucrative Seven-Figure MBA Degrees

Can GPAs Get Any Higher At Top Business Schools?