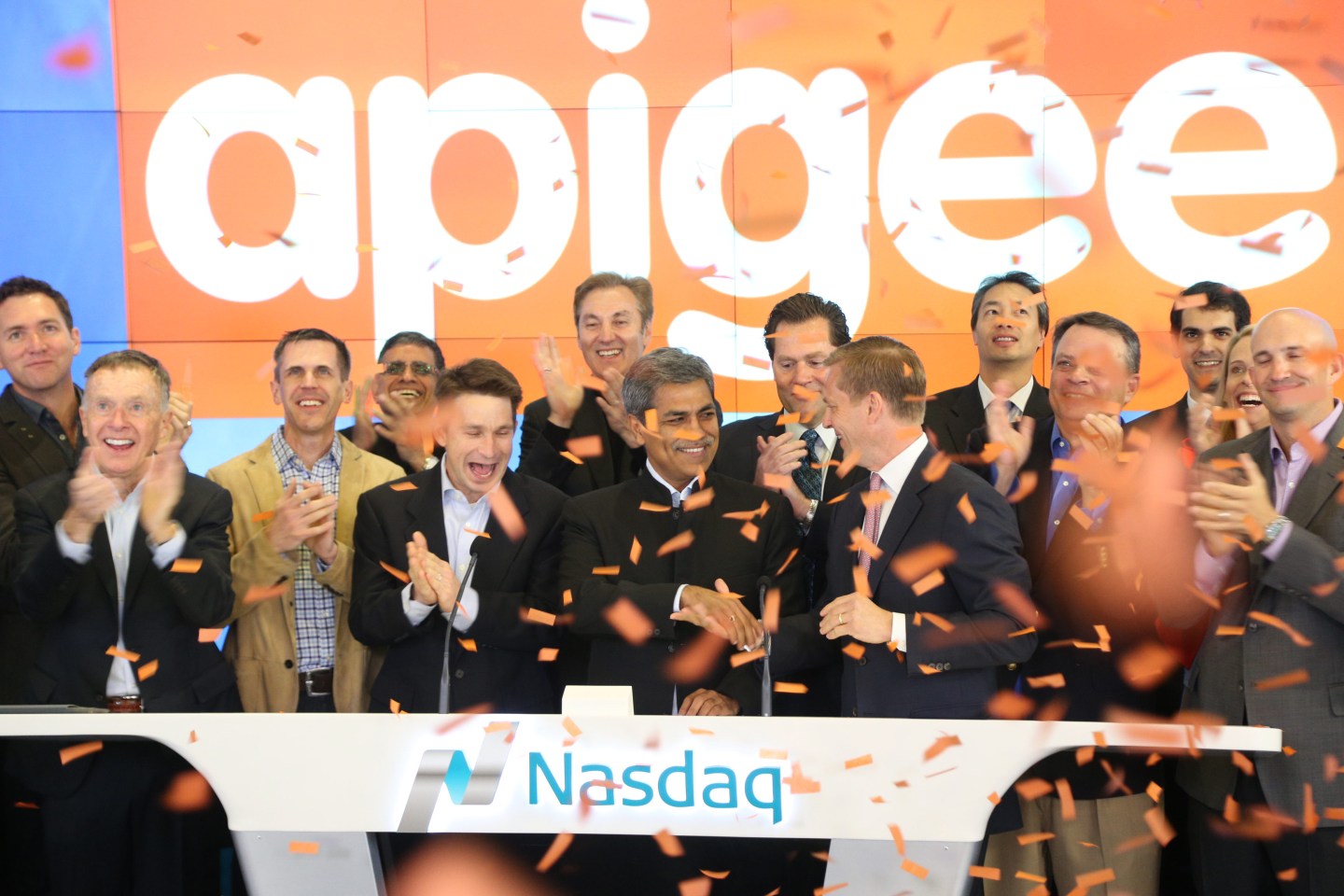 Apigee’s debut is an anomaly in that many enterprise tech startups have decided in recent month to take on big rounds of funding instead of undertaking an IPO, underscoring how companies can rake in millions of dollars in investment without having to open up their books to the public. For example, cloud company Docker raised $95 million earlier this month while security company Illumio received $100 million.

Apigee CEO Chet Kapoor acknowledged in an interview with Fortune that there is a lot of “private money” flowing about. But, he described an IPO as too good of an opportunity to turn down.

For Apigee, going public means more than just getting a huge cash infusion; it raised $87 million. It’s also about the veneer of legitimacy that comes with being a publicly traded company and how that could help with getting more customers down the road, Kapoor explained.

Apigee specializes in a type of technology known as an application program interface, which is essentially the software middleman that connects different software languages, data, and services used by companies like ride-hailing app Uber and Yelp, the local listings site.

To show users a map of nearby restaurants, Yelp must use an API to bring in restaurant location data and user reviews.

But as software gets more complex, developers have to add more APIs to connect everything, which can be a complicated mess. Apigee casts itself as a potential remedy to the problem.

Apigee helps companies manage all of their APIs and also provides them with security so that only the right people on staff have access to the right APIs. A retail company that does online transactions, for instance, would only want certain developers and staff members to access the appropriate APIs for its payment processing.

Over the past few years, Kapoor said that more companies have realized a need for the type of sophisticated software used by Uber for fear of losing out to more innovative rivals. By going public, Apigee is hoping to tap into that market and sell companies on the idea that they need help managing all the APIs to modernize their businesses.

As for the company’s stock performance on its first day on Wall Street, Apigee started off the morning at $17 per share, which dropped to $16.70 by the close of the markets. It’s initial market cap is now roughly $500 million. The company now joins cloud-storage company Box as one of the two Silicon Valley based tech companies to have gone public in 2015. According to the company’s SEC filings, Apigee counts legacy enterprise companies Oracle (ORCL) and IBM (IBM) as competitors.

Apigee, in San Jose, is going to need an influx of customers, because for now, at least, it is unprofitable. Although Apigee raked in $52.7 million in revenue for 2014, it had $83.7 million in operating expenses, according to company filings.

A big chunk of those operating expenses came from tripling its sales force between July 2012 and July 2014, the filings said. At this point, Kapoor said he doesn’t see the company spending as much money on hiring more sales and marketing staff, meaning that the company’s operating expenses should shrink.

“The investment part is behind us,” Kapoor said.

To land more customers, Apigee has partnered up with the multinational software giant SAP (SAP) to resell its services. In this case, companies can potentially buy Apigee’s product from SAP if they want to build a mobile application, for example, that uses SAP’s underlying technology in conjunction with services and data hosted outside of their internal infrastructure.

Whether this partnership will result in more customers for Apigee without the company having to hire legions of new salespeople remains to be seen. But Kapoor cites this as one of the ways it is operating leaner while trying to become profitable.

Apigee (APIC) counts Walgreens, eBay (EBAY) , and AT&T (T) as customers, among others.

For a look at Box’s recent IPO in 2015, check out this video from Fortune.