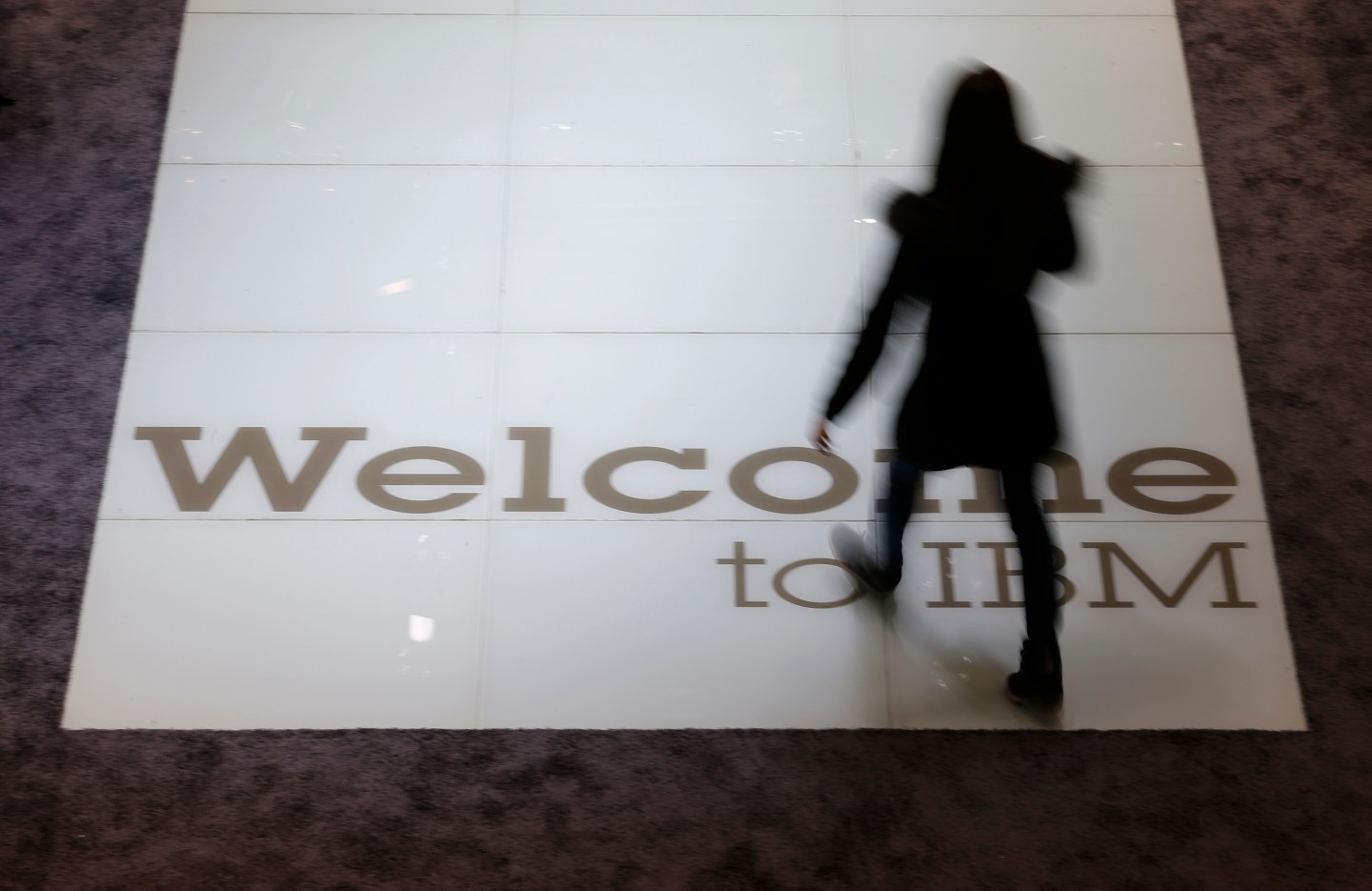 A woman walks over a welcoming sign at the booth of IBM at the CeBIT trade fair in Hanover March 15, 2015. The world's biggest computer and software fair will open to the public from March 16 to 20. REUTERS/Morris Mac Matzen (GERMANY - Tags: BUSINESS SCIENCE TECHNOLOGY) - RTR4TEQL
Photograph by Morris MacMatzen — Reuters

IBM reported a 12% dip in revenue for its most recent quarter — a decline the company blamed mostly on the strong U.S. dollar and the impact of selling off business like a low-end server unit to Lenovo last year. Here are the key points from Monday’s first-quarter earnings release.

What you need to know: IBM said Monday that its first-quarter revenue declined 11.9% from the same period a year ago, to $19.6 billion, and just shy of analyst predictions of $19.64 billion, according to Thomson Reuters. It was the eighth time IBM has missed sales expectations in the past nine quarters while overall sales have dropped for 12 straight quarters.

The company said its revenue was flat in the first quarter compared with last year when adjustments “for currency and divested businesses” are taken into account. IBM became just the latest large company to cite the strong U.S. dollar as a reason for a decline in international revenue, but the company also blamed a handful of divestitures, including the sale of its System X server unit to Lenovo. IBM also announced plans last fall to sell its chip division to Globalfoundries.

IBM’s (IBM) profits dipped slightly, to $2.3 billion or $2.45 per share, from $2.4 billion or $2.44 per share during the same quarter last year. The company’s shares rose slightly in after-hours trading, following the release of its first-quarter earnings, after the stock gained more than 3% during regular trading Monday.

The big number: Cloud computing, an integral part of CEO Ginni Rometty’s plan for revitalizing IBM, represented one of the few bright spots in the company’s quarterly financial report. Cloud revenue improved overall by more than 60% in the first quarter, the company said, with cloud services specifically generating $3.8 billion in sales after bringing in $2.3 billion during the same quarter last year.

However, for the most part, IBM’s segments suffered across the board in the most recent quarter. Software revenue was down 8%, to $5.2 billion, while the company’s services brought in about 12% less revenue, to $12.2 billion. Meanwhile, the company’s flagging hardware business continued to struggle, particularly considering the lost revenue from the sold-off server business. Hardware sales dropped 23% in the first quarter, to $1.7 billion.

What you might have missed: Yet another disappointing quarter for IBM only increases the pressure on CEO Ginny Rometty, who has been trying to shift the company to focus on cloud and mobile products. In a statement released along with the first-quarter numbers, Rometty called the quarter “a strong start to the year” while highlighting the company’s improvement in areas of strategic focus, including cloud services. “Our focus on higher value through portfolio transformation and investment in key areas of the business drove continued margin expansion,” Rometty said.