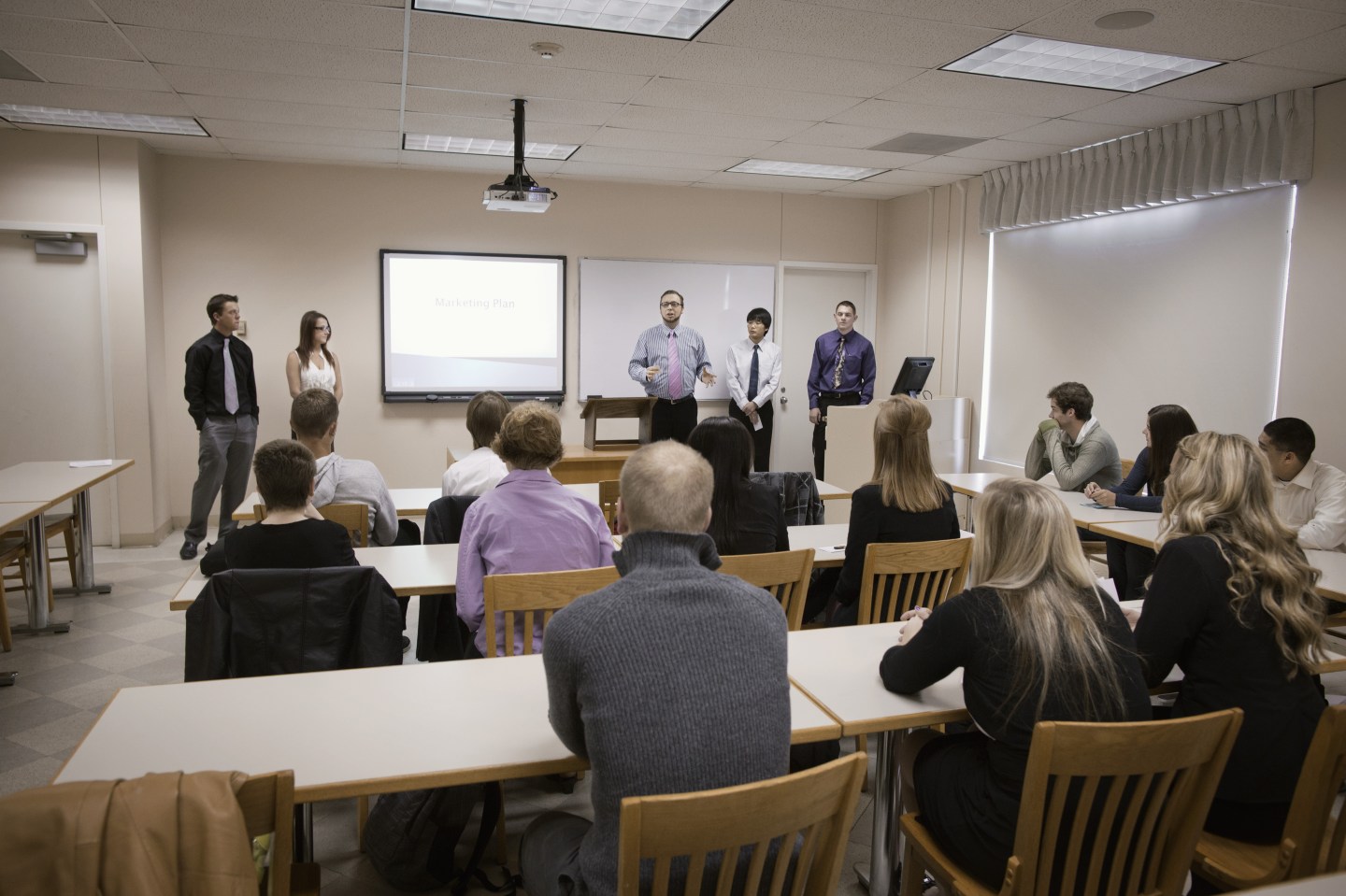 A picture may be worth a thousand words, but there’s no guarantee it will tell the tale you have in mind. Case in point: a recent magazine ad for Harvard University’s Advanced Management Program. The ad portrays a classic business-school setting, including a professor and numerous professionally dressed students in the midst of a lively discussion. What stands out, though, is not so much the scene as the cast of characters. Every person in the photo is male.

The ad drew a swift reaction, as one might expect, including a widely shared tweet from CNBC Los Angeles reporter Jane Wells.

What's missing in this ad for the #Harvard MBA program? Anyone? H/t @Harri8t pic.twitter.com/kaEysMo4ih

It’s a fair question. There’s been considerable discussion about whether women are adequately represented in traditional MBA programs, but executive programs, which are geared for people already very well-established in their careers, haven’t faced the same scrutiny. How are women faring in that part of the B-school? The ad in question certainly doesn’t paint a promising picture, so Fortune reached out to the executive programs at Harvard and four other top business schools in the hopes of finding out where things stand.

Let’s start with Harvard. The business school is quick to point out that the all-male ad is just one of several being used to promote the school’s executive education offerings (the others feature at least one woman). The gender-mixed ads were used four times more often than the all-men one was, Brian Kenny, chief marketing and communications officer for HBS, tells Fortune: “No single ad is intended to reflect the full diversity of the classroom.”

In Harvard’s executive education programs, about 24% of students are women, up from 18% in 2009. As a point of comparison, the university’s regular, two-year MBA program is comprised of 41% women. “Although we are pleased that the numbers are trending in the right direction, we are continuing to work on improving the overall ratio as much as possible,” says Kenny.

At the Massachusetts Institute of Technology, it’s a similar situation. The figure in their executive program is about 17%, inching upwards in custom programs, says Kate Anderson, director of marketing and enrollment for MIT Sloan Executive Education.

The University of Pennsylvania’s Wharton School of Business declined to share specific statistics, but Monica McGrath, the school’s vice dean of executive education, admits levels are not where she’d like them to be. “When I first came to Wharton in 1999, enrollment in the [traditional] MBA program was about 30% women,” McGrath tells Fortune. “Now it’s very close to 50%, but in executive education, it’s not even close to that. It’s a problem, for sure.”

It’s worth noting that executive education programs focus on a very different constituency than traditional MBA programs do. Most standard MBA programs are designed for young professionals, while exec ed targets those in more advanced positions of leadership. Programs tend to grant certificates rather than degrees, and they generally consist of short but intensive sessions. Harvard’s Advanced Management Program, for instance, runs roughly seven weeks and is priced at $75,000 including tuition, books, case materials, accommodations and most meals. Also, employers tend to be the ones footing the bill.

Exec-ed programs skew male because, unfortunately, C-suite offices still skew male. Because the programs target people in the advanced stages of their careers, it’s understandable that they lag behind traditional MBA programs in terms of women’s enrollment. MBA students tends to come from the junior sector of the workforce, which is relatively gender balanced. That balance is lost when you move higher up the ladder. According to Catalyst, only 14.6% of Fortune 500 executive officer positions are held by women. That’s a relatively small pool of potential candidates for executive education programs to draw from.

Still, some b-schools say they are making an effort to increase female enrollment in executive ed. McGrath, for instance, focuses in particular on the Wharton School’s five-week Advanced Management Program. She says she is concentrating on increasing outreach to companies, and on having conversations with organizations’ chief officers to encourage them to send promising female executives to executive education programs.

Fortune talked to three execs who recently attended MIT for exec-ed, and all three said they had positive experiences–but all also said they were aware of their minority status, in various ways. “There were far more men than women,” says Zahra Jamshed, a seasoned IT executive. In some of her classes there were “hardly one female at a table of seven to eight attendees.”

“I do wish there were more women professors, but I never experienced or felt any gender bias in a single course,” says Joann Assawamatiyanont, who now works in a CTO role with Service Group. “All attendees have been focused on subject matter, and group exercises were not dominated by male colleagues. I experienced equal opportunity to speak, lead or follow during course exercises.”
[fortune-brightcove videoid=4165615317001]

Mitra Best, now U.S. Innovation Leader at PricewaterhouseCoopers, says she wasn’t bothered by the gender imbalance. “I studied computer science as an undergrad, where I was one of very few young women in my classes,” says Best. “We can’t let numbers and ratios discourage us from growing, leading and making a difference.”

For more news on women in business, subscribe to Fortunes’s daily newsletter, The Broadsheet: www.getbroadsheet.com.