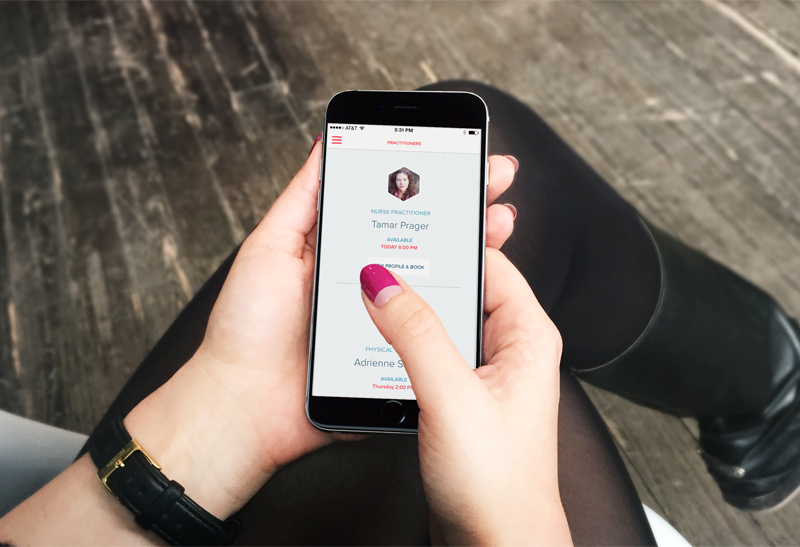 Doctor appointments are time-consuming, difficult to schedule, and these days, increasingly expensive. What if, instead of cooling your heels in the waiting room, you could get some face time with a doctor, or even a doula, lactation consultant, or nutritionist, using your smartphone?

That’s the idea behind Maven, a digital clinic that connects patients and health care providers. The service, says founder Katherine Ryder, is designed to bridge the gap between non-essential office visits and the typical alternative—Googling for advice online. Maven is specifically geared toward female users, with a wide range of providers who specialize in women’s and children’s health. Using the company’s free iOS app, available Thursday, women can schedule virtual appointments and video chat with the practitioner of their choice. (Disclosure: Ryder has contributed articles to Fortune in the past.)

Here’s how it works: App users enter information about their medical request or question, and are matched with a series of providers from an appropriate specialty. Most providers have detailed bios, some with video. “We want people to find providers they like and develop relationships with them,” says Ryder. Users also have the option to create profiles, though those who want to remain anonymous can do so.

The intention is not to replace in-person medical exams, says Ryder. Instead, Maven can help out when someone has a non-urgent medical need, such as a question about birth control or a prescription refill.

The service does have drawbacks. For one, providers do not have access to the details of users’ medical history, and must rely solely on what patients tell them. Users’ regular doctors are also left out of the loop. Maven does document all sessions, but patients who use the app will be responsible for sharing the advice or treatment they get from Maven docs with their offline providers.

Maven enters the telehealth market at an interesting time. Though still relatively small, the industry is growing at an impressive clip. Telehealth revenues are expected to increase by roughly 45% this year, hitting $585 million by year-end, according to IBIS Market Research. What’s driving that growth? Technology improvements, certainly. Rising healthcare costs are also a factor. Americans with health insurance through their employers paid an average of $707 in out-of-pocket healthcare costs in 2013, up from $662 the previous year.

Providers are screened by a practitioner advisory committee. The process includes interviews, reference checks, and a written assessment and case study, says Ryder. About 80% of those who apply are approved. The majority are female.

Rebecca Callahan, a women’s health nurse practitioner in New York, has been working as a Maven provider during the company’s beta phase. She says she appreciates how the app allows her to control her schedule, and believes it’s a helpful educational tool for her patients. “Women have constant questions about their sexual and gynecological health,” she says. “This is a way to empower women to take control instead of Googling in the middle of the night.”