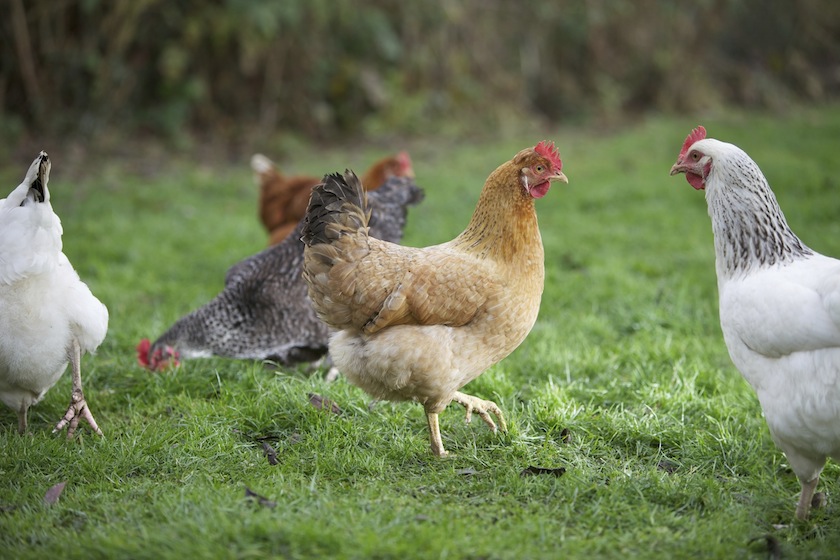 When animal welfare activism comes up in conversation, it’s only natural to think of angry protesters waving gruesome photos on the street or a bucket of red paint splashed on someone’s brand new fur coat. But the movement’s biggest strides are increasingly taking place in meetings with CEOs at some of the world’s biggest companies.

For the past 10 years, the Humane Society of the United States (HSUS) has focused on bringing an end to the confinement of farm animals, mainly pigs and young cows (future veal) who are kept in crates without room to turn around, and the egg-laying hens kept in cages too small to spread their wings. “[It’s] one of if not the worst forms of animal cruelty within industrial animal production,” says Josh Balk, senior director of food policy at HSUS.

To achieve its goal, HSUS has worked with nearly 100 corporations, including Starbucks, Marriott, and Aramark, and major restaurant chains like Burger King and Panera Bread. In the last few months, for example, the country’s three largest food service providers—Aramark, Sodexo and Compass Group—have committed to switch their collective 1-billion-plus eggs to cage-free. And in late March, Dunkin’ Donuts announced a plan to up their current domestic commitment — 5% cage-free eggs — to 10% by 2016, and to consider the feasibility of eventually going to a full 100%.

You could easily connect HSUS’s achievements to the growing consumer interest in humane, sustainably produced food. But a closer look at the organization’s methods offers a useful case study in the art of advocacy and negotiation.

Aim for the widest target. HSUS has taken several approaches to meet its goals, like building consumer awareness and lobbying for legislation. Appealing directly to the companies that buy animal products in giant quantities is probably the most efficient method. In 2015, the average American is expected to consume 257.9 eggs. Aramark, meanwhile, will buy 230 million. And global corporate policies don’t have borders. “When you have a corporation making animal welfare policy,” Balk says, “there’s no geographic displacement of cruelty.”

Go to the decision maker. When you want a discount on your lunch, you go to the restaurant manager. When you want to fundamentally change the way a company does its business, you talk to the chief executive. Balk says he often just started with a “polite email” to the CEO. From there, he says, he was usually directed to the appropriate person within the company. But starting with the CEO’s approval is important. Corporations agree: “It makes so much sense that you would expect decisions like these to be made with your senior management, starting with your CEO,” says Tod MacKenzie, Aramark’s head of public affairs, who also worked on animal welfare policies with Balk and HSUS at DineEquity, owner of the IHOP and Applebee’s brands. The Dunkin’ Donuts decision also started with an email to the CEO, according to Christine Riley of Dunkin’ Group.

Find common ground. At first glance, an animal welfare organization and a business that makes money selling animal products may seem to be at odds, but they don’t have to be. “The common ground between us and HSUS is the consumer,” says MacKenzie. As consumers demand humanely sourced foods, HSUS helps them find them.

Assume the best in people. In the mid-to-late 1990s, says MacKenzie, big companies “steered clear of [advocacy groups] like the third rail of the subway.” Now, however, there is a recognition that “just because you may not always see eye-to-eye doesn’t mean you can’t have a constructive dialogue.”

Build trust by understanding each other’s motivations. “[The companies] obviously know that we’re an animal organization that is working to prevent cruelty to animals,” Balk says. “And they get that I understand that they can’t do anything that’s going to harm the business.” That honesty, he says, translates into trust.

Take baby steps. Big changes often happen incrementally, something highlighted by Dunkin’ Donuts’ announcement, which represented another step on a path the company and HSUS were already on, not a major shift in policy. “They understand and respect the complexities of a global supply chain,” Riley told Fortune. Dunkin’ isn’t the only company to follow this step-by-step approach. In July 2012, Sodexo announced that it would phase out gestation crates (the small pens used to house breeding pigs) from its supply chains by 2022. The next month, it said it would switch all of its shell eggs (the whole eggs most consumers are familiar with) to cage-free by July 2014. And in February 2015, the company announced that its animal welfare policy would include switching liquid eggs (out-of-shell eggs commonly used by food processors) to cage-free by 2020, as well as the elimination of veal crates by 2017.

Stick to the facts. Conversations about emotional issues like animal cruelty can quickly devolve into heated arguments. “When I meet with these companies, what I tell them is the truth,” Balk says. He presents statistics, numbers, photos and videos — but no accusations or blame. Companies appreciate this approach. Sticking to a fact-based conversation, says MacKenzie, keeps the parties from getting entrenched in specific positions.

Educate your way through obstacles. Aramark wouldn’t disclose how much their switch will cost them, but MacKenzie says the premium is “hefty.” (A study from earlier this month also found cage-free eggs are more expensive than their confined counterparts, but HSUS points to a 2005 study that found the difference to be only about a penny more per egg.) Balk says he explains the “hidden costs” of confining hens in cages, consumer outrage, food safety, and sustainability concerns. At the same time, MacKenzie says Aramark had to explain its timing challenges to HSUS. “You’d love it to be that switch you could flip on and be done sooner,” he says. But capacity constraints and cost implications require time to change. “That’s where the education process comes in.”

Show your gratitude. To keep companies at the table, Balk says HSUS recognizes all of the efforts they make, not just the big ones. “We applaud the steps that they’re taking, even though they know we want them to go further,” says Balk. The group has been working with Dunkin’ Donuts since 2012, giving the chain credit at each incremental announcement. And in January 2011, after American drive-in eatery Sonic announced its goal of sourcing 5% of its eggs cage-free by 2015, HSUS showed up at a shareholder meeting to thank them.