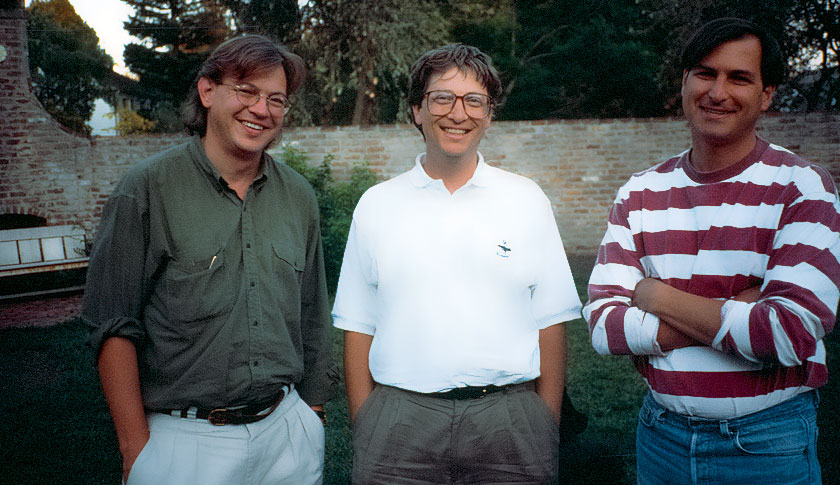 “Becoming Steve Jobs” has already been given the full Apple treatment. Apple called it the “only book about Steve recommended by the people who knew him best,” and posted free excerpts on iBooks. The book tour was launched with a joint “meet the author” event moderated by Daring Fireball’s John Gruber at the Soho Apple Store. The Q&A is available in audio and video on iTunes.

The book is now a New York Times bestseller, and the authors have done Q&As from coast to coast. By the time Brent Schlender and Rick Tetzeli got to me, there weren’t many questions they hadn’t already been asked.

You’re both listed as authors, yet you write in Brent’s first person. How did you divvy up the writing?

SCHLENDER: We each wrote initial drafts of entire chapters, and passed them back and forth to each other for tweaking and modification, and the occasional complete rewrite. I liken the process to the making of a samurai sword, during which one of us would beat on it and then pass it back to the other to beat on it again, sometimes restructuring things and other times honing words and passages. While it was written in my voice, and from my perspective, we both fussed over every sentence repeatedly, and the result was a fairly consistent voice and tone.

TETZELI: Discovering how to do this was one of the many lessons of the project. This was much more of a merged project than the standard editing of a magazine story. Also, by merging our thoughts and style this way we produced a book that really is what both of us think. There aren’t passages of the book where I feel, “Oh, that’s just Brent’s thought.” Since I was a full partner, I could test his ideas, and push them. I think that’s how we ended up with something that is nuanced in a way that feels right.

Your book has been described as a corrective to Walter Isaacson’s biography. Why do you think Steve picked Walter in the first place?

TETZELI: Folks may see it as a corrective, but that’s not the way we launched it. I think Apple’s unexpected support –as far as I know, Eddy Cue has not made a habit of tweeting about books in the past — has made it feel that way. We wrote our book because Brent’s unique access gave him a different view of Jobs. As for why Steve picked Walter… well, why wouldn’t he? Walter’s an incredibly accomplished biographer.

Were you more surprised when Apple PR turned down your interview requests or when they agreed to cooperate? Did they do it because you’d won their trust, or was it part of the general loosening of the PR reins we’ve seen lately?

SCHLENDER: It took a while to realize that Apple’s initial reaction was both instinctive, and emotional. Instinctive, because the company under Steve’s leadership had never opened up all that much to help with stories focusing on individuals, and especially on Steve. Whenever I had proposed anything even remotely close to a “profile” of Steve or anyone else, the answer had always been “no.” (Pixar was different, because Steve wanted [Ed] Catmull and [John] Lasseter and others there to get some of the public credit for Pixar’s successes.) Nobody at Apple actually came out and said this, but I believe the company’s reluctance to help us was also emotional, because even 18 months after Steve’s death, many of those who worked closest with him were still grieving. I could sense some resentment, too, at the thought of people like me trying to “cash in” on our personal experiences with Steve, or of photographers hoping to sell old images.

The executive team at Apple has always been very close-knit. I’ve known most of these people for many, many years, so it wasn’t as if I was a stranger making the request. I wrote directly to some of them initially, and while some of them responded directly to me and even indicated some interest in helping us, they all deferred to Katie Cotton, the head of corporate communications, to make the final decision. She politely informed us that as a matter of policy Apple wasn’t going to cooperate on any further book or film projects. I would contact her periodically to see if anything had changed, but she always said no, although in one instance she asked me to prepare formal requests for each executive we hoped to speak with to give them a sense of what we were hoping to learn. I did that in the fall of 2013, but never heard back until the spring of 2014, when, seemingly out of the blue, Katie emailed to say that Apple was considering our requests. A few weeks later — about a week after our manuscript deadline, incidentally — Apple offered us interviews with Tim Cook, Eddy Cue, Jony Ive and Katie.

They didn’t share with us their reasoning behind the decision to cooperate in a limited way. But in the interviews they were all very forthright and told us more than we expected to hear.

TETZELI: Having dealt with Apple PR at a distance over the years, as an editor at Fortune, EW and Fast Company, their cooperation surprised me far more than their dismissal of our requests. But Apple PR, like all of Apple, is opening up a bit.

Why Fast Company and not Fortune, where you worked for so many years?

TETZELI: Once upon a time, Fortune might have been a more high-profile outlet than Fast Company, but that’s no longer the case. Since I work at Fast Company, and since we had already published one story about Jobs with Fast Company, it made sense to offer them the first excerpt.

Lev Grossman in Time says your book “gradually abandons its critical distance and becomes a paean to the greatness of Jobs and Apple.” He also praises Walter’s reporting (which included the fact that the vegan cake at Steve’s wedding was inedible) and complains about your clichés. Did you want to punch him in the nose?

SCHLENDER: No, not really. Everyone is entitled to their opinions.