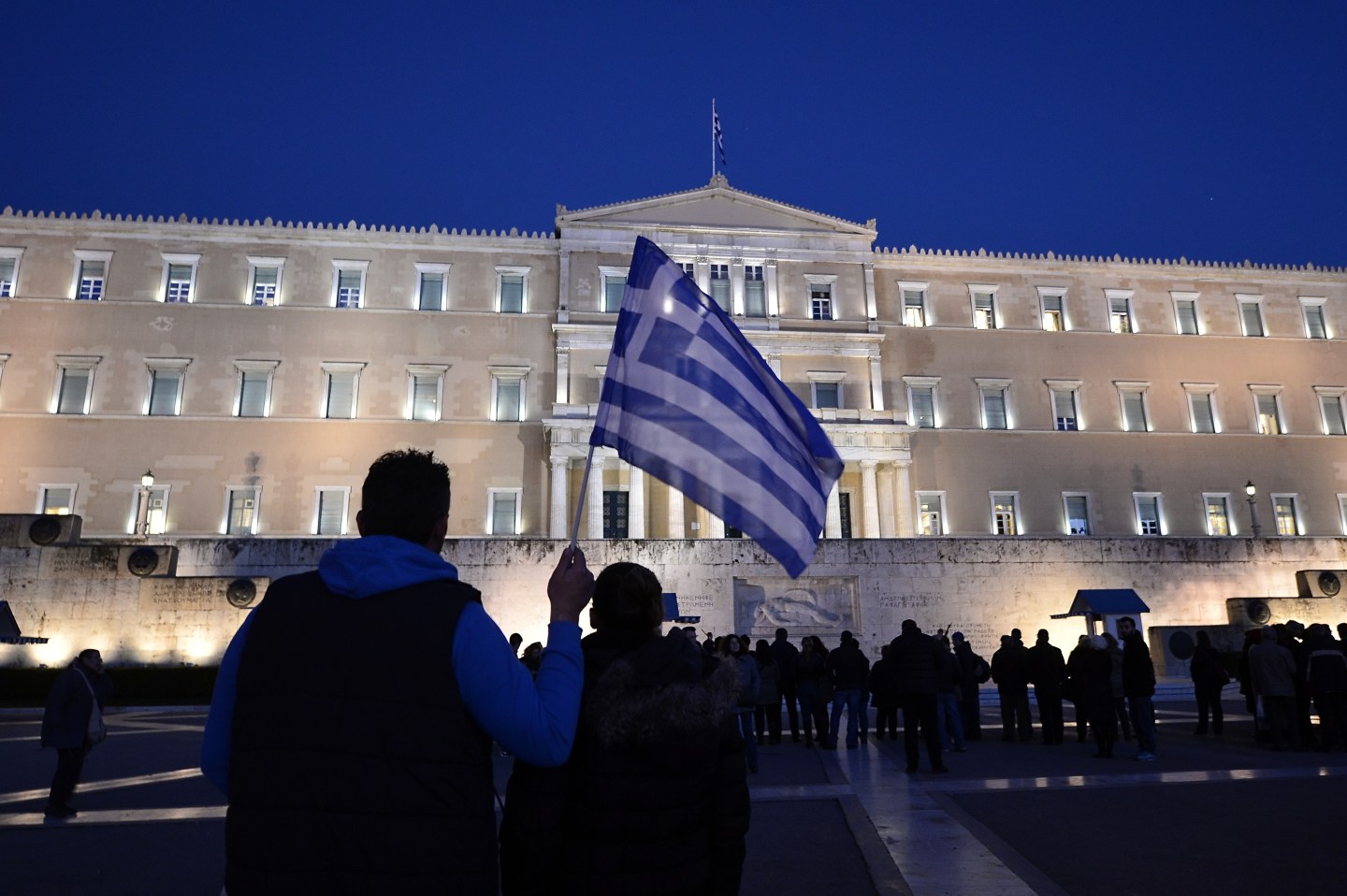 A man holds a Greek flag in front of the Greek parliament in Athens as people gather in support to their government on February 20, 2015. Greece and its sceptical European partners were near a much-needed compromise to agree a request by Athens to extend an EU loan programme that expires this month, sources close to the matter said. AFP PHOTO/ LOUISA GOULIAMAKI (Photo credit should read LOUISA GOULIAMAKI/AFP/Getty Images)
Photograph by Louisa Gouliamaki — AFP/Getty Images

Play ball! This week marks the official start of baseball season for the MLB. But, it remains to be seen to what extent Greece, which has a massive loan repayment coming due this week, will play ball with its Eurozone creditors and the IMF. In other news, the upcoming release of more Fed minutes has the potential to move the market while Samsung mounts its latest challenge to rival smartphone-maker Apple. Meanwhile, the market is girding itself for another round of quarterly earnings with a number of companies expected to blame disappointing results on the strong U.S. dollar’s effect on overseas commerce. Here’s what you need to know to start your week.

The struggling country said recently it could run out of money when its $480 billion loan repayment to the International Monetary Fund comes due this Thursday. It’s the latest turn in a bailout drama for Greece, which has fought its Eurozone creditors about exact nature of the promised fiscal reforms it will implement. There is a possibility that Greece will skip out on the IMF payment to cover the government’s wages and salaries.

Wednesday will see the release of minutes from the Federal Open Market Committee (FOMC)’s March meeting. Investors will give the minutes a close reading as they search for any further indication from the Federal Reserve about when the market can expect a much-anticipated interest rate hike. The FOMC, which will meet again at the end of April, didn’t tip its hat too much following the March meeting, though the committee did remove the word “patient” from a statement on when interest rates will rise.

Aluminum-maker Alcoa (AA) will report after-close on Wednesday, and the market will be interested to see how the company plans to move forward following a recent acquisition spree. Also, Constellation Brands (STZ) will report fourth-quarter numbers this week, so investors will be looking for some guidance on the current fiscal year from the alcohol and spirits company. Meanwhile, retailers such as Walgreens Boots Alliance (WBA) and Bed, Bath & Beyond (BBBY) will also be reporting numbers, while the second-quarter report from Family Dollar Stores (FDO) could include an update on the company’s pending sale to Dollar Tree in a deal that still requires regulatory approval.

Samsung’s new Galaxy S6 goes on sale globally Friday, and customers who pre-ordered the smartphone should receive it by that day, depending on their mobile carrier. After recently losing its crown as the world’s biggest smartphone seller to Apple (AAPL), Samsung is taking aim at its rival with a new phone featuring a similar design to the latest iPhones as well its own new mobile payments platform, Samsung Pay.

Most MLB teams will have their opening day either Sunday or Monday as the professional baseball season gets under way. The national pastime is more profitable than ever, with the MLB reportedly raking in a record $9 billion in revenue last year. This season also marks the first year of the sport’s largest-ever individual contract: Miami Marlins outfielder Giancarlo Stanton signed a 13-year, $325 million deal over the winter.

For more on Greece, watch this video: