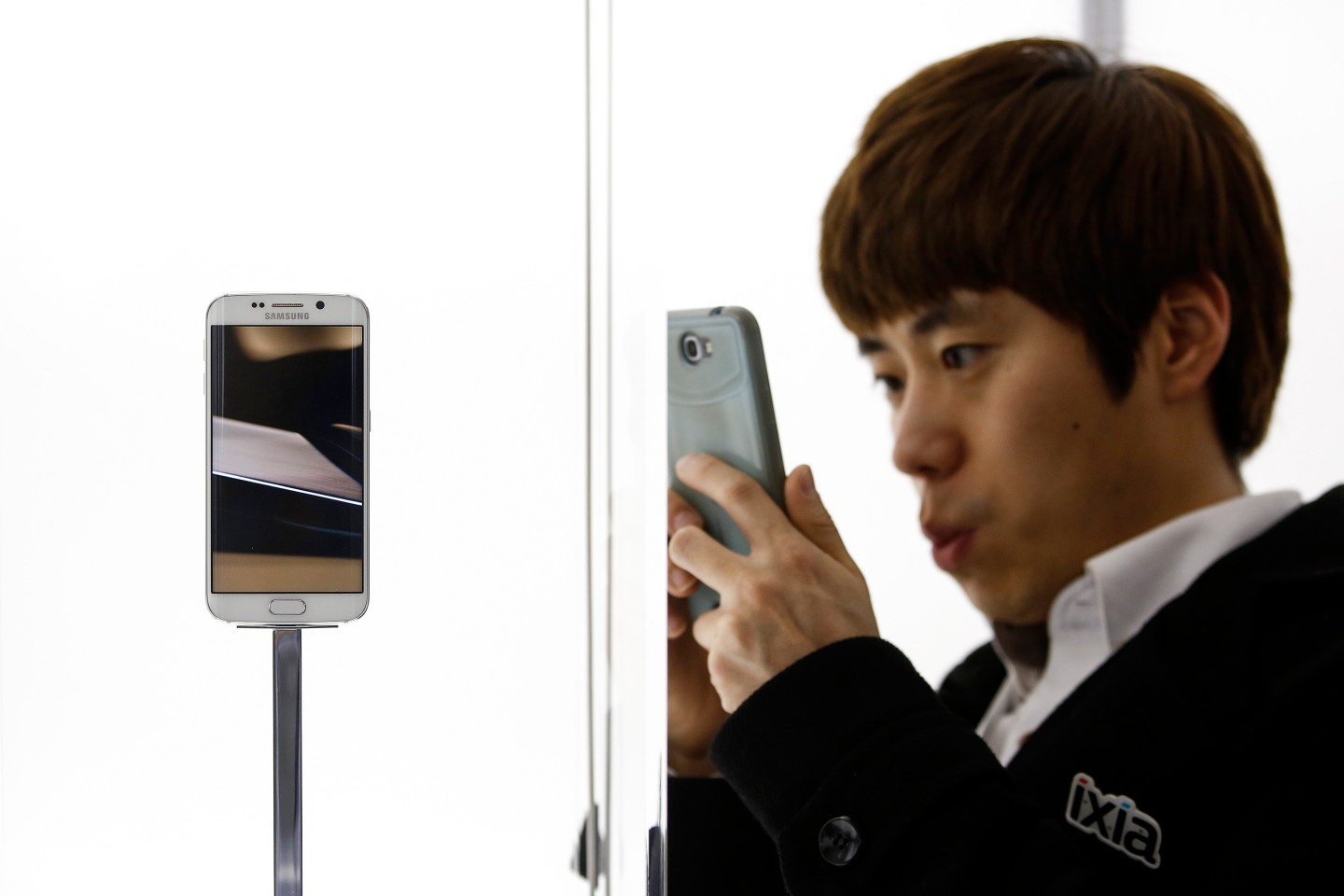 A visitor uses a mobile device to photograph the new Samsung Galaxy S6 Edge smartphone in the Samsung Electronics Co. pavilion at the Mobile World Congress in Barcelona, Spain, on Monday, March 2, 2015. The event, which generates several hundred million euros in revenue for the city of Barcelona each year, also means the world for a week turns its attention back to Europe for the latest in technology, despite a lagging ecosystem. Photographer: Simon Dawson/Bloomberg via Getty Images
Photograph by Simon Dawson — Bloomberg/Getty Images

Once the titan of global smartphone sales, Samsung is looking to retake its throne after Apple made inroads with its iPhone 6 and 6 Plus. On Sunday, in a room filled with technology journalists in Barcelona, Samsung used the 2015 installment of Mobile World Congress to announce the latest models of its Galaxy line of smartphones: the S6 and S6 Edge.

Both devices take the Galaxy line in a completely new direction, and on multiple fronts. The most apparent change, at least the first time you lay eyes on the duo, is the noticeable lack of plastic formerly synonymous with Samsung smartphones. With the S6 lineup, Samsung opted to go with a combination of metal and a glass housing.

The S6 Edge features a curved display on both edges of the screen, offering enhanced functionality. (An on-stage demonstration showed custom color alerts for incoming calls, and shortcuts to favorite contacts). A revamped fingerprint sensor sits below the home button, foregoing the need for a user to swipe her or her finger across the button. Instead, he or she only needs to place a finger on the button and wait for the scan to complete. The change makes the experience nearly identical to that of Apple’s Touch ID, and appears to eliminate a complaint I had about last year’s Galaxy S5.

There are two features that have made the new Galaxy models more alluring to me than previous editions. The first is called Samsung Pay. The company’s mobile payment solution takes a two-pronged approach by combining a near-field communication (NFC) chip with the magnetic secure-transmission technology it acquired from LoopPay to transmit payment information between your device and a point-of-sale terminal.

When I reviewed LoopPay last year, I found the technology to be magical, yet disappointing. I was forced to carry around and manage yet another device. The promise behind mobile payments is convenience; the LoopPay fob was not convenient. A quick refresher: You hold the LoopPay fob up to a normal credit card reader, press a button and the machine would interpret the signal in the same manner it would a card being swiped. The payment was then processed, without the machine—and often time the clerk—realizing you did anything different.

Now that that technology is embedded into the device and combined with the ability to use NFC for payments, Samsung Pay is very appealing. And it has a leg up on Apple Pay, which is limited to working only at retail locations and outlets with the necessary equipment to process NFC payments. (This is a drawback I experienced first-hand when I tried to go a week using Apple Pay for every purchase in my small, Colorado town.)

With Samsung Pay, users won’t be caught in the middle of a spat between competing payment platforms as Apple is with the likes of CVS completely disabling NFC terminals. So go right ahead, CVS, disable NFC. The Galaxy S6 has a trick up its sleeve.

Another thing: Each year when Samsung would announce the latest Galaxy device, it would announce a slew of new software-based features that served little purpose. Having a smartphone watch my eyes, then scroll a webpage or pause a video based on where I’m looking? No thanks. The “enhancements” slowed down the device, drained the battery, and offered little benefit to the end user. In other words, they served only to pad the spec sheet.

With this year’s release, Samsung cut the fat, at least with regard to its proprietary user interface known as TouchWiz. Any unnecessary menus or overzealous prompts were left out, it seems. The litany of excess apps notoriously preinstalled on the Galaxy line has been removed. All in all, the company claims to have cut down so-called software bloat by 40 percent, and the phones now include only a trio of Microsoft apps and select Samsung apps (S Health and Milk, Samsung’s music service). At least, until wireless carriers get a hold of it.

For years, Samsung’s flagship phones have been long on features, but short on follow-through—at least to me. The new Galaxy S6 and Galaxy S6 Edge appear to lay the groundwork for a lineup of devices that are quite the opposite.

Jason Cipriani is the author of “Logged In,” Fortune’s personal technology column. Read it on Fortune.com each Tuesday.