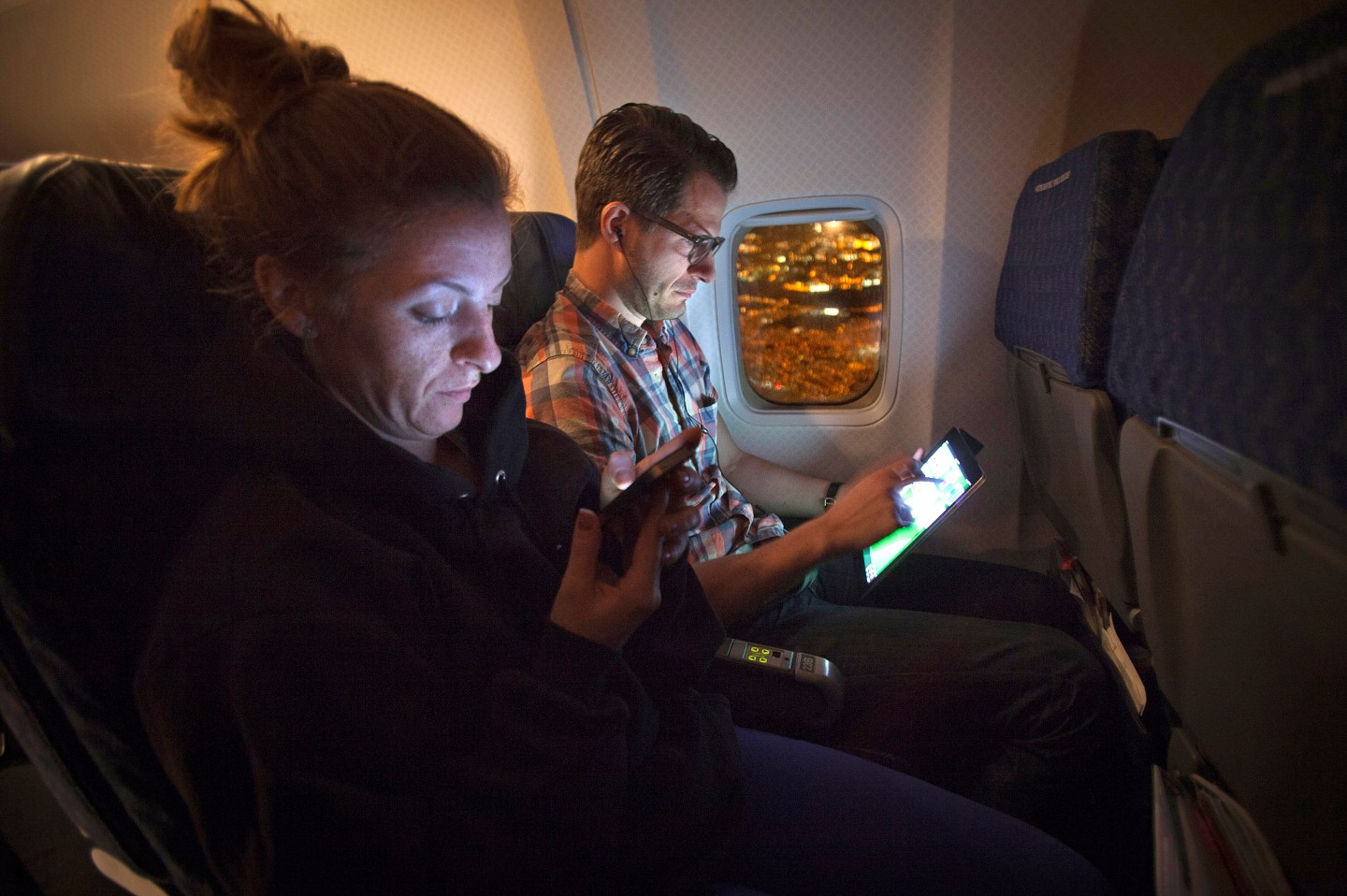 People use their smart devices on an American Airlines airplane, which is equipped with Gogo Inflight Internet service.
Photograph by Carlo Allegri — Reuters

If you’ve checked Facebook or shopped on Amazon while flying 35,000 feet, you’ve likely used Gogo (GOGO), the leading company when it comes to connecting airplane passengers to the Internet. Its service, which seemed improbable just a decade ago, is now available on 1,000 flights daily.

Fortune recently sat down with Michael Small, Gogo’s CEO, to talk about the challenges of getting bandwidth in the sky, efforts to relieve sometimes spotty connections and the business opportunities for in-flight wireless Internet connectivity. His company is hoping to tap into the ever-growing demand for airplane Internet service to build a business that also includes in-flight entertainment systems and, perhaps one day, help to stream data from airplane equipment to crews on the ground.

Last year, Gogo’s sales from both commercial airlines and private jets grew 30% to $408.5 million. The company lost $84.5 million, as it continues to expand. Below, Small explains the different ways travelers perceive his company’s namesake service. His words have been edited for length and clarity.

Q: In just a few years, online in-flight access has gone from a sci-fi dream to a necessity for some people. Are you surprised?

No, connectivity and what it’s done for the world is obvious on the ground. The only difference in the sky is the challenge in getting the bandwidth there. As soon as you give people bandwidth, they consume it.

When I interviewed for this job five years ago now, they were all concerned: “We’ve got this new service is anybody going to use it?” I said, “That’s not your problem. You’re going to run out of capacity a few hours after you launch.” Hours is exaggerating, but very quickly. That’s the whole game: If you can get the bandwidth, people will use it. They’re addicted.

Q: Just under 7% of people on any given flight connect through Gogo?

Q: How much pressure are airlines under to add the service?

In the U.S., pretty much all the airlines have made the decision already. Airlines do nothing well if not but copying each other. If the service is working, you’ve got to have it. That’s going to happen outside the United States too. The reason that’s not happened is that there was no commercially viable solution. But Gogo announced less than a year ago 2Ku [which uses Internet from satellites rather than from ground antennas] and that is, in my view, the first commercially viable solution.

Q: Without satellite, you would have had to install ground antennas in every country. Connecting planes over oceans would be impossible, right?

That’s why you needed satellite. Prior to 2Ku, all the satellites were too expensive and did not very well cover portions of the earth. Our new antenna doubles bandwidth efficiency. Plus satellites didn’t cover equatorial regions very well. When I say equatorial regions, I’m saying a quarter of the world’s surface. To some airlines, that doesn’t matter a lot. But if you flew to Johannesburg or Sydney or São Paulo, or you happen to be on Singapore Airlines or Copa in Panama City, you were really screwed with the old technology. So we made the technology a lot better and cut the costs in half.

Q. Flyers have complained over the years about Gogo’s service being spotty. What has been the trouble?

We’ve gotten our reliability to very high levels now. We think we have one of the world’s most reliable, if not the most reliable, system. It’s congested, there’s no doubt about that. We hear that complaint every single day. We know what makes customers happy—that’s more bandwidth. We don’t think our competitors have solved the reliability issue.

Q: Prices have gone up over the years. Why?

We didn’t know what the right price was. There’s the hardcore frequent flier business traveler—we haven’t found their limit yet. They will pay anything and they would almost rather pay a higher price to keep the riff-raff off so they have all the bandwidth to themselves. Then there’s the general consumer, who says it’s too expensive and too slow. They say “I expect to get free Wi-Fi at Starbucks and why should I pay for this in the sky?”

Over time, we will find a way to engage 100% of the plane. Some people will be using something for free because the airline wants them to check their connecting gate. Some will be paying for a low-bandwidth service and some will be paying for the full boat. You would have to defy every trend on the ground for it to be anything other than 100%.

Q: What is the average daily price?

We’re consistent across airlines. We vary across city pairs. New York-San Francisco may cost different from New York- San Diego because it’s more for leisure flyers. So we actually see how each route performs and adjust the price up and down. We have 25 or 30 different price structures (including day passes for $16 and monthly passes for $60). It isn’t quite airline pricing. But it’s pretty close. We have a former airline guy managing it. We are essentially facing the same problem as the airlines do: capacity constraint. If you’re selling out, you raise the price. If you’re not selling out, you lower the price.

Q: You’re upgrading your ground and satellite systems quite extensively. How much will Wi-Fi performance improve?

Q: Even at 70 mbps, will people be able to stream films?

There will be some modest constraints on streaming of video—maybe a small charge to just get people to think about whether they want to do it. You won’t quite have a ground-like experience. But we will close 80% of the gap. It will still be more expensive than ground service.

Q: As it is, you block YouTube and Netflix?

Yes. We block most video.

Q: People have come to expect that they can stream Netflix or YouTube anywhere? They’re not happy about that.

The business traveler gets it. The occasional traveler doesn’t. The people who don’t fly very often are a high percentage of our users because they may try it randomly here and there. They say this is ridiculous, it’s too expensive. But the million frequent fliers love this thing—their life is so much better.

Q: What additional services are possible through a satellite connection?

Ultimately, everything you see happening on the ground will happen in the sky. There will be all kinds of apps tailored to flying. Our texting apps is one right now. It’s essentially fiber from the sky, and any cell phone can reach any cell phone in the world. We’ll seed the market with the first couple of our own. But ultimately, we’ll need an open platform where people can develop their own apps.

Every trend you see on the ground, you’ll see in the air when the bandwidth becomes available. Every airline engine will be monitored. Every avionics will have its software upgraded wirelessly. Airlines won’t have to go searching for planes anymore and searching for black boxes. You’ll know right where they are. All that stuff will happen. It’s a function of bandwidth and a little bit of time. Airplane systems just don’t change. You’ve got to work your way through the process.

Q: Your company has to deal a lot with FAA regulations, FCC regulations, and red tape. I assume that’s a huge barrier to entry?

Yes it is. It’s shockingly hard. Even when we’re interviewing new candidates, we tell them, be prepared for life at Gogo. They say, “Yeah, yeah, yeah.” And then they get here and they say, “Oh my god.” We’ve got to build our systems from scratch, and that’s pretty dang complicated. But even once you do that, you have to get it on the planes. There’s a big certification process. To maintain your equipment, that’s generally done through airline personnel. And they can only do what’s in the operating manual and per spec. Of course, planes can be anywhere in the world. They’re certainly not where you left them last. We’re faced with a logistics challenge that would keep FedEx or Amazon up at night.

Q: Back to the idea of connecting airplane infrastructure to Wi-Fi. Will technicians on the ground be able to monitor engine performance, fuel consumption, et cetera?

If a plane has a hard landing, the pilot reports it. Some guy has to come out and inspect everything to determine if it was a hard landing or not, and whether anything needs to be changed—with the bias that the pilot said it was a hard landing and it would be unwise to disagree. With a couple of sensors you would know the exact impact. You can spend hundreds of thousands of dollars replacing landing gear, tires, and shocks. So you would be able to get it right every time. You wouldn’t be guessing.

Another real example is navigation—taxiing from the runway to the gate. The pilots upon landing don’t always know the airport really well and don’t always take the best route. Or there could be congestion, there could be construction. They assume they can knock a minute off the average taxi time, and save on fuel and the turn time is pretty big stuff.

Q: Your company is frequently talked about as an acquisition target by the Verizon’s and AT&Ts of the world. Any thoughts on that?

We have a built a leader in this industry and we want to be the leader. We estimate that this is a $30 billion revenue industry. We have a lot of runway. If someone wants to pay us for that runway, I guess I’ll have to do what’s right for shareholders.

Q: Last year, AT&T said it would get into in-flight Wi-Fi and then quickly killed that idea for unclear reasons. Do you think they found it was too difficult and expensive?

Q: You also sell airlines systems in-flight entertainment systems. You load those films on a plane and then stream them wirelessly to passengers and their personal devices, right?

Exactly. A lot of airlines can’t afford to put in in-flight entertainment. So for them that solves the problem there. People are bringing their own devices on the plane anyway. Even before you begin installing an embedded entertainment system its obsolete. With all certification and installation times, the things are three years old when they’re new. Now you can buy a new iPad, bring it on, and fire it up. That weight is coming on their plane anyway. People are bringing their iPads regardless. Instead of putting expensive, heavy, and hard-to-maintain stuff on your plane, you just go to a passenger-owned device. That’s the wave of the future.

Q: How long before all planes are connected?

There are 19,000 planes that have 50 seats or more in commercial aviation globally. And we have 2,100 planes equipped with our service now. So we’ve crossed the 10% mark globally, and we’ve crossed the 50% mark in the U.S. I would say that the vast majority of planes, or significant majority in a decade. Within a decade, most any plane you’re likely to board is going to have connectivity.

Q: In five years, what will your company be like?

Five years from now it will be truly global. And we will have a lot more satellite installs. The only unpredictable part of this thing will be exactly what are the apps. There will be a few apps where it will be like “Oh, who thought of that?”