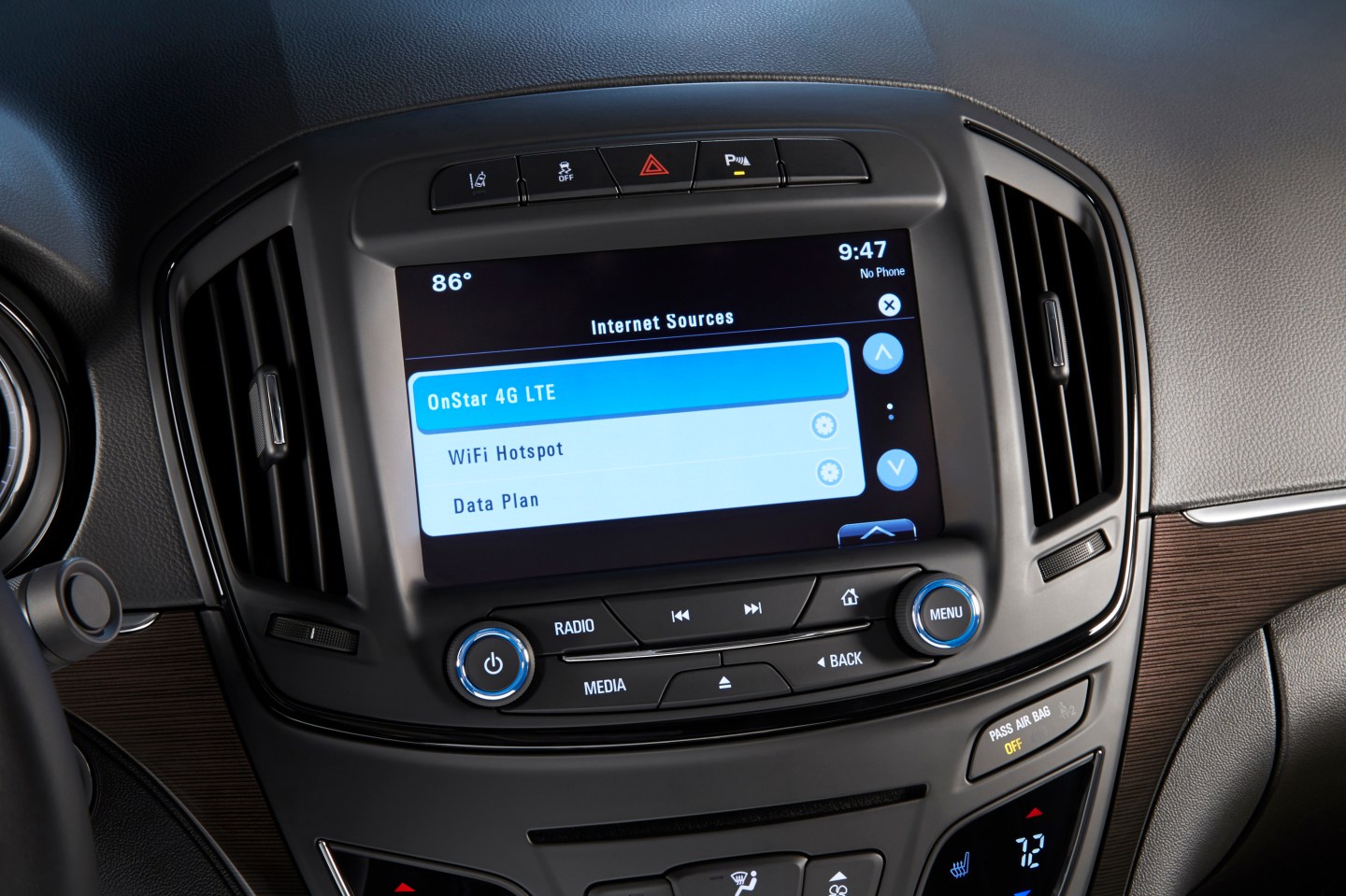 Starting this summer, owners of 2015 Buick LaCrosse, Regal, Verano and Encore may stay connected by the high-speed data of OnStar 4G LTE. A built-in Wi-Fi hotspot will allow passengers to pair up to seven devices within the vehicle, allowing them to browse the internet, play games or send email.
Courtesy of General Motors

General Motors is giving a new wireless look to its brands, including stodgy Buick. The company has now put WiFi into dozens of new Buick, Chevrolet, Cadillac and GMC models, thanks to a new AT&T 4G radio module that provides the same kind of high-speed link you’d expect to get out of the latest 4G iPad or Samsung Galaxy.

The service is by no means free (you’ll have to attach the car to AT&T data plan), but it’s a nifty feature to have in this age hyper-connectivity. When the kids insist on streaming Thomas & Friends on even the shortest shopping trips, it makes sense to turn the car into another Internet zone.

But there’s a lot more that GM can do with a multi-megabit link piped directly into the car. This week I spoke with GM OnStar chief technology officer Tim Nixon about the automaker’s future plans for car connectivity. He assured me that WiFi hotspots were just the beginning. As wireless technologies in GM cars evolve, those vehicles will become nodes on the larger Internet, sending vast amounts of information to the cloud where it can be shared with your mechanic, your smartphone, apps and other cars.

“When we went to 4G, we decided to take a completely different approach,” Nixon said. “We wanted to create a platform we could build on.”

Tethering Chevys and Caddies to the Internet

GM has offered some version of wireless connectivity in its vehicles since 1996, when OnStar was born. The service originally used the first analog cellular networks to connect drivers to OnStar operators when they needed roadside assistance or other aid. But as cellular and automation technologies progressed, so did OnStar. Telematics services powered by Verizon’s 2G network allowed GM owners to track stolen vehicles or remotely unlock and start their cars with a smartphone.

But when GM began trading out Verizon’s slow 2G network for AT&T’s faster LTE network last year, it opened up a realm of new possibilities, Nixon said. No longer constrained by a narrow data channel, GM could upload reams of vehicle and engine data from hundreds of thousands of vehicles. Instead of just sending an alert when a car’s collision sensor goes off, GM can track everything that happens from the moment the ignition is pressed to the moment it’s parked: Starts and stops, acceleration and braking, oil temperature, fuel levels and even the status of multiple different vehicle systems and parts.

Right now GM isn’t doing too much with all of that data. Its RemoteLink smartphone app displays a summary of the diagnostic data GM collects, letting drivers keep tabs on things like fuel economy and when an oil change is needed. GM also offers a program to customers insured by Progressive that can potentially earn them discounted premiums. If you opt in, OnStar will track your driving behavior for a few months, calculating a safe driving score that takes into account how lead-footed you are on the highway and how often you slam on the brakes.

But there’s more potential uses for that kind of data, Nixon said. By connecting to GM’s cloud database or communicating directly with a car’s onboard computer over WiFi, mechanics could diagnose problems from a tablet right as a car rolls into the garage. By amassing data from all its vehicles, GM could detect potentially faulty parts in its vehicles, triggering a recall before any accident occurred, Nixon said.

By crowdsourcing data from all of its cars on the road, GM can connect its vehicles to larger transportation networks, gathering information on traffic, weather and road conditions in real time. Transit planners could even use GM data to guide their future infrastructure investments. For example, by tracking where electric and plug-in vehicles go in any given city, planners could determine the optimal locations for car-charging stations.

Furthermore, GM wants to eventually open up not just its databases, but also direct communications channels into the car to outside developers. It’s created a set of APIs that would provide the Internet hooks for everyone from Google (GOOG) to Pizza Hut (YUM) to trade information with your dashboard.

Navigation APIs could let any app developer embed a “drive me” button. For example, you could beam driving directions from a Google Maps search to your OnStar navigation system, or an integration with OpenTable (OPEN) might automatically load your chosen restaurant’s address into the dash 30 minutes before your reservation time. Social location apps like Foursquare’s Swarm could share your car’s precise coordinates with your friends.

That kind of collaboration work could produce new revenue streams for GM as developers pay to access those APIs, but Nixon said the company’s ultimate goal is to use its connectivity and data to differentiate GM cars and trucks from the competition.

“If we can monetize that connection at some point than there is revenue potential, but selling a $20,000 or $30,000 vehicle, that’s where the value to GM is,” Nixon said.

GM has a lot of grand ambitions about what 4G connectivity and data collection efforts will do for its cars in the future, and because it’s committed to putting LTE in every vehicle it makes in the coming years, it’s probably better positioned than any automaker to fulfill those ambitions. But it’s also safe to say that GM is proceeding very slowly in deciding how to use these new connectivity tools.

Some of that can be chalked up to the conservatism of the auto industry – Detroit moves at much slower pace than does Silicon Valley – but several automakers are already doing a lot more with their Internet connections than GM. Audi’s first 4G car, the A3, launched in the U.S. last year with much more than just WiFi. It uses Google Earth for navigation and displays Google Street View images on the dash, it reads Twitter (TWTR) and Facebook (FB) updates and streams Spotify and Pandora through your cars speakers, and can find you a parking space.

Even automakers that aren’t embedding cellular radios in their vehicles are making more extensive use of Internet apps and services than GM. Ford’s (F) Sync AppLink system hosts dozens of streaming, entertainment and location apps, and connects directly to the driver’s smartphone (using it as a way station to the Internet). Meanwhile, GM has been very reticent about letting any outside developer into its dashboard (Pandora is an exception).

Nixon acknowledged that GM is still figuring out its connected infotainment system strategy. Those smartphone-like apps will eventually come, however, as GM has signed with Apple (AAPL) and Google to bring their respective CarPlay and Android Auto interfaces to its future vehicles.

As for the bigger picture of giving outsiders access to GM’s growing treasure trove of vehicle data, Nixon said GM is still “wrapping its arms around” the potential applications for that data. And more significantly for those with privacy concerns, it wants to make sure it has all of the stopgaps in place to make sure GM owners are protected when it unleashes that data on the outside world.

“We’re going to be a little bit careful,” Nixon said. “We’ve developed a close relationship with our customers. We take that trust very seriously.”

Kevin Fitchard (@kfitchard) has covered wireless networks and technology for 15 years, first at Telephony Magazine and then at Gigaom. Before that he worked as a professional line cook.