CEOs tell Congress: Patent trolls are giving us the shakedown 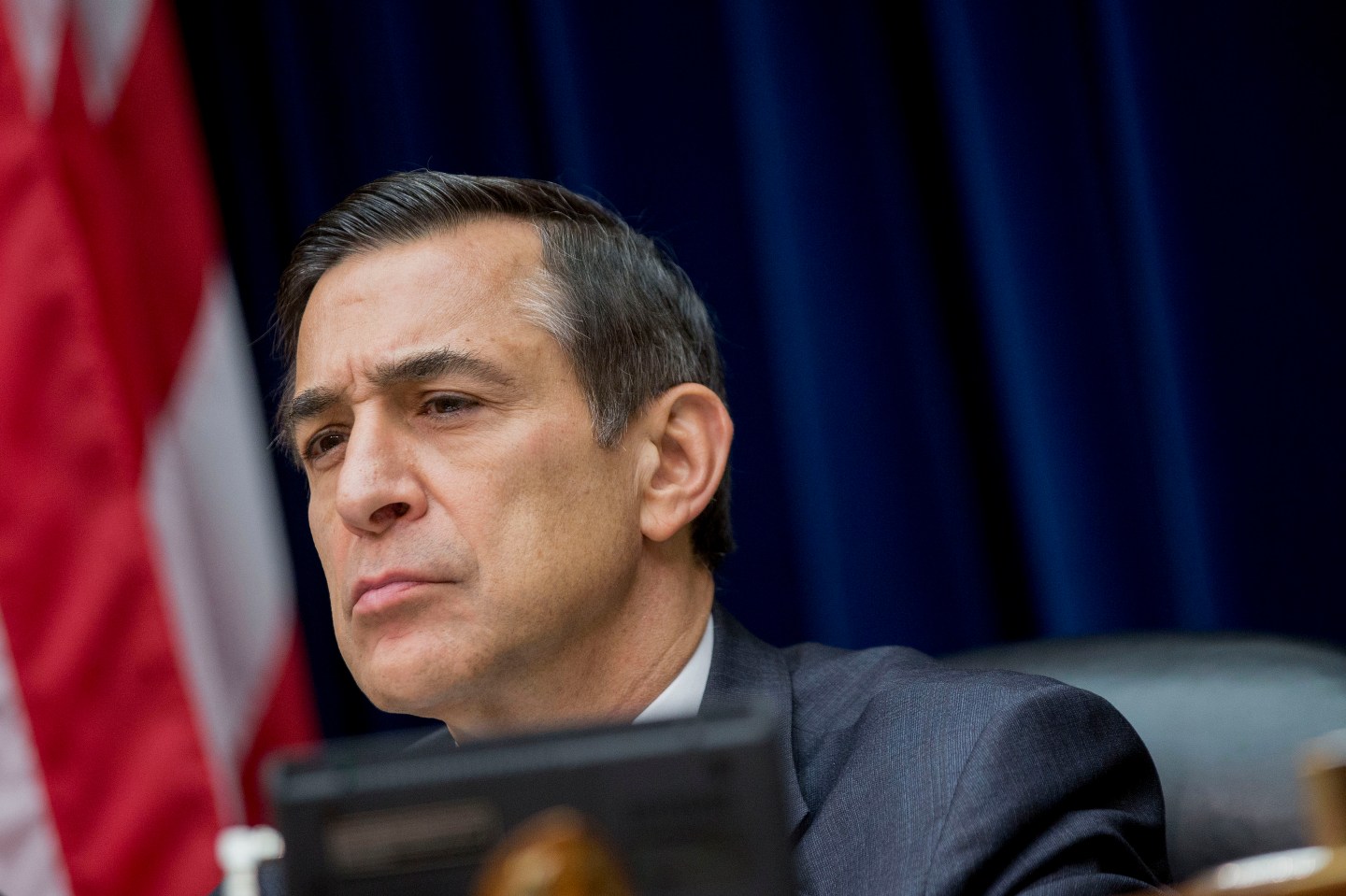 Representative Darrell Issa, a Republican from California and chairman of the House Oversight Committee, listens during a hearing with Jonathan Gruber, professor at Massachusetts Institute of Technology, not pictured, during a House Oversight Committee hearing in Washington, D.C., U.S., on Tuesday, Dec. 9, 2014. Gruber, the economist whose remarks on Obamacare have drawn criticism from Republicans, apologized to lawmakers for being Òglib, thoughtless and sometimes downright insulting.Ó Photographer: Andrew Harrer/Bloomberg *** Local Caption *** Darrell Issa
Photograph by Andrew Harrer — Bloomberg/Getty Images

Overstock’s top lawyer, Mark Griffin, told lawmakers on Wednesday that the company spends millions to scare away so-called patent trolls, but that many other retailers can’t afford to do the same and choose to settle instead. This amounts, he said, to “a tax on innocent operating companies.”

Griffin was one of four executives to address members of the House Judiciary Committee, as part of what has become an annual effort to fix the country’s troubled patent system.

He was joined by the CEOs of a credit union and an app company, who told horror stories of patent-based shakedowns, and by the founder of an exercise equipment maker, who warned Congress not to go too far with changes to patent law.

The focus of the hearing was patent trolls, which have plagued U.S. companies for years, but which remain resilient despite years of attempts by courts and lawmakers to curb them.

A plague of patent trolls

Patent trolls operate by arming shell companies with old patents, and then demanding that their targets pay a royalty or else face a costly lawsuit. The trolls flourish thanks to an economic asymmetry in the legal system that makes it easy to attack on the cheap, even as their targets must pay huge sums to defend themselves.

“It’s the patent troll business model, and it is especially effective when it is targeted at a small business with limited resources … Patent trolls practice a legal form of extortion,” Kathryn Underwood, CEO of Ledyard National Bank told the hearing.

Underwood explained how a troll used a mass mailing letter to demand that her Vermont credit union and four other nearby banks pay royalties because their ATMs were connected to the Internet. The banks decided to pool their resources in order to fight back, but ultimately concluded it made sense to simply pay off the troll instead.

The banks’ calculation was based on the prospective cost of litigation, but also on the likelihood that the troll could game the litigation process in a way that would chew up hundreds of hours of executive time. According to Underwood, such threats to time are another reason trolls wielding suspect patents win so often.

For now, trolls appear to be on a roll. According to Overstock’s Griffin, patent litigation has surged in 2015, with 499 new cases filed in February alone. It’s unclear how many of these were of the troll variety, though Griffin said that last year trolls accounted for 64 percent of all patent cases.

Speaking at the hearing, Representative Darrell Issa, Republican of California, described the ordeal faced by many companies as getting “mugged by a patent troll.” Another member called the process a “scam.” The members also explored measures, set out in a bill called “The Innovation Act,” to fix the system.

One of these measures would require patent plaintiffs to spell out how exactly a company is infringing their invention. Currently, trolls operate by sending out generic complaints that do little more than list the patent and say that a company’s products are infringing it. Oftentimes, the defendant must wade into costly legal quicksand simply to find out what the troll is talking about.

Other reform measures would put time or cost limits on discovery, which is the legal process in which parties to a lawsuit furnish documents and testimony, as well as make it easier for a successful defendant to recoup legal fees from a troll.

Another part of the Innovation Act would make it easier for companies to shield downstream customers from troll attacks. This would be a change from current rules that let patent owners sue anyone in the supply chain – meaning that they can sue not only a manufacturer of an infringing product, but any retail shop or end user too.

This idea of protecting downstream infringers didn’t sit well, however, with hearing witness Bryan Pate, who is the CEO of an exercise bike maker called ElliptiGo.

Pate said that manufacturers in China, which he says are already ripping off his product, could start selling the knock-offs in the United States too. If this happens, his only recourse might be to sue retailers that are selling an unauthorized version of the patent-protected bike.

In response, Rep. Issa suggested that the right recourse might lie in seeking an import ban from the International Trade Commission, which is another body that handles patent issues.

Overall, the Members of Congress and the witnesses appeared largely supportive of the anti-troll reforms set out in the bill. Skeptics, however, will note these ideas have come up in past patent reforms bills, but have nonetheless failed to become law.

A law that requires patent owners to explain what they’re suing about, or that eliminates the economic incentives of patent trolling, would appear to be a slam-dunk given widespread outrage over trolls.

Yet even as a growing number of influential tech and retail companies support the Innovation Act, patent reform may still fall on its face. That is what happened last year, when Democrats in the Senate killed a previous version of the law, and in 2011, when Congress passed the America Invents Act, a watered-down law that has done virtually nothing to curb patent trolls.

This time around, the House, which voted for the last version of the Innovation Act by a large margin, appears committed to going forward based on Wednesday’s hearings.

The Senate, however, may again toss a life-rope to the patent trolls. This may come by way of the STRONG Patent Act, a competing bill by Senator Chris Coons, Democrat of Delaware, that would blunt momentum for patent reform by offering largely cosmetic measures instead.

Such a law would be cold comfort to the likes of United for Patent Reform, a broad new coalition whose members includes everyone from Google to Verizon to the National Association of Home Builders.

The coalition’s best hope now lies with Senators John Cornyn (R-Tx) and Charles Schumer (D-NY), who are vocal supporters of the reform measures set out in the Innovation Act, but who have yet to introduce a Senate version of the bill.

“I’m continuing to work closely with Senator Cornyn and our other colleagues to build on the progress we made on our patent reform compromise last year,” said Sen. Schumer in response to an email asking about the bill’s progress.

In the meantime, small and large companies will watch nervously as patent trolls continue to chew their way threw the U.S. economy.

Todd Moore, the CEO of a small app maker called TMSoft, explained to the hearing that he got off lightly when a troll demanded that he wire transfer $3500 to settle accusations that one of his apps infringed a patent.

Thanks to a pro bono lawyer, Moore says he was able to fight the troll to a standstill. Other app makers, he said, had suggested it would end otherwise: