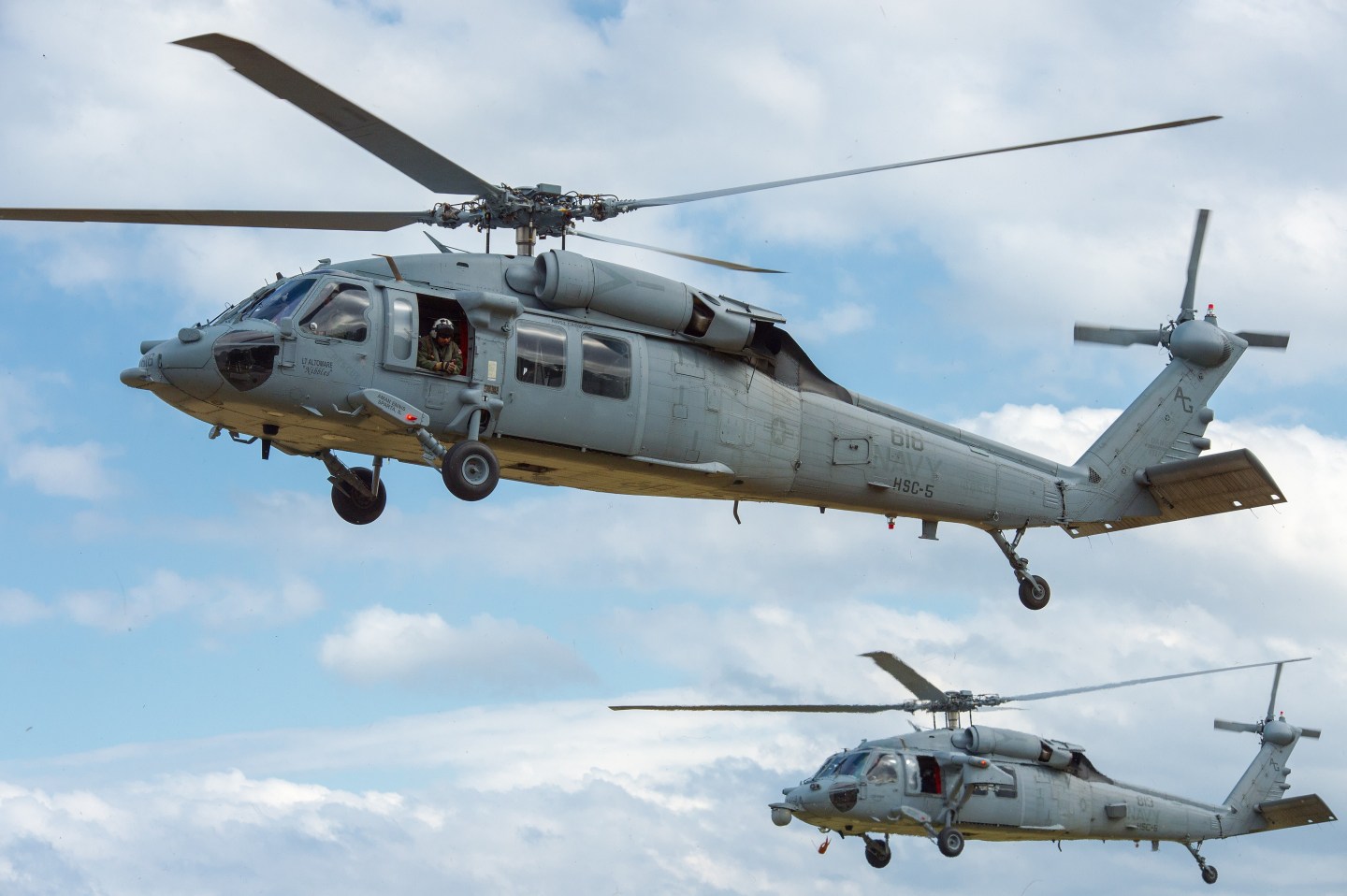 Two Sikorsky Seahawk helicopters head to the USS Arlington during the NATO exercise Bold Alligator 2014, on October 31, 2014, off the east coast of the US. The international war games, Bold Alligator 2014, is about a rapid response for today's crises with 19 NATO countries participating with 17 ships and 2 submarines. AFP Photo/Paul J. Richards (Photo credit should read PAUL J. RICHARDS/AFP/Getty Images)
Photograph by Paul J. Richards — AFP/Getty Images

Last week, in a not-so-surprising move, United Technologies (UTX) announced that it is weighing whether to unload helicopter manufacturer Sikorsky—maker of such iconic aircraft as the U.S. Army’s UH-60 Black Hawk and the rotorcraft that transport the President of the United States. Divesting itself of Sikorsky makes sense for UTC. In a company that has cemented itself as a maker of sub-systems and components, Sikorsky is the only systems integrator in UTC’s portfolio. Meanwhile, demand from the U.S. military—Sikorsky’s single largest customer—has appreciably softened.

But the announcement has raised questions about what happens to a Sikorsky separated from UTC, fueling speculation that one of America’s largest helicopter manufacturers will likely be spun out, bought up by an American rival, or even snatched up by an overseas competitor. Last week UTC’s CEO Gregory Hayes did nothing to quash such rumors. At an analyst event, Hayes said Sikorsky is “just not quite as attractive as the rest of the businesses.” He also suggested that the company would be open to considering offers from a foreign buyer.

Who that buyer would be is unclear to the point that such a sale, especially to a foreign buyer, remains unlikely. Despite a good deal of churn in the rumor mill, considerations ranging from anti-trust regulations to taxes to simple cash-flow make Sikorsky either an unattractive or difficult acquisition target for the companies that otherwise might want to acquire Sikorsky’s contracts and technical know-how.

There are several reasons UTC would want to divest itself of Sikorsky, not least softening demand from military customers. As Hayes noted, Sikorsky doesn’t really fit with UTC’s core focus, but strong growth made it worth keeping around. That’s no longer the case. “You can keep a company if it’s out of line with your focus as long as it’s delivering double-digit growth,” says Richard Aboulafia, vice president for analysis at aerospace and defense consultancy Teal Group. “But when that growth stops, you do what you can to move away.”

That growth has definitely slowed. The U.S. Army and U.S. Marine Corps.—two of Sikorsky’s (and the global helicopter market’s) most important customers—don’t have the money to modernize their fleets fast enough. Sikorsky did roughly $7.5 billion in sales last year, but netted only $219 million in profits. Its single-digit margins lag other divisions of UTC and could be a drag on any company that might acquire Sikorsky as well.

But should UTC go through with the divestiture as expected, an acquisition—especially a foreign acquisition—is unlikely. Potential buyers of Sikorsky include Boeing (BA) and Textron (TXT) in the U.S. and Airbus or Augusta Westland (a joint venture between Italy’s Finmeccanica and British multinational GKN) in Europe. But assuming either wants to pay up for Sikorsky’s slow near-term growth prospects, an acquisition by either Airbus or Boeing would likely face pushback from anti-trust regulators, analysts say. Other companies that might actually want Sikorsky’s technology portfolio, like Textron, don’t have the cash to buy it.

Couple that with the massive tax bill that such a sale would generate and the fact that Sikorsky’s existing military contracts—including those for a new Presidential helicopter—would likely move the Department of Defense to get involved in any foreign transaction, and the prospect of a major merger or acquisition grows dimmer still.

The most likely outcome: UTC spins out Sikorsky as a stand-alone company, one that makes some money but not a ton of money, at least in the near term. Sikorsky likely won’t be able to leverage its strong suite of next-gen helicopter technologies as demand for new rotorcraft remains low. But the U.S. Army does have a major initiative planned to modernize its helicopter fleet throughout the 2020s and 2030s, for which Sikorsky is competing. Until then, an independent Sikorsky will likely get by selling Black Hawks and civilian helicopters until global demand for rotorcraft improves.