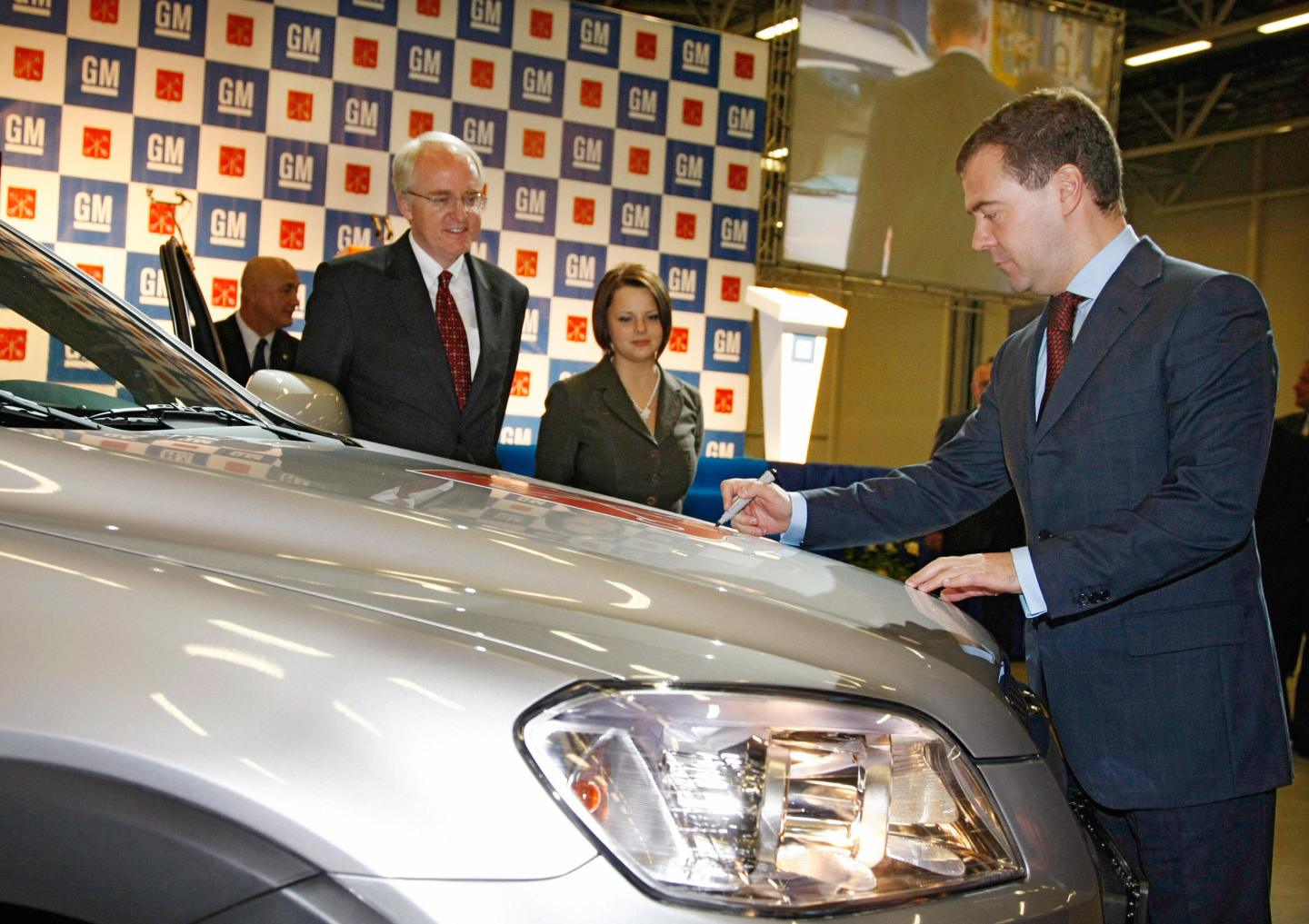 Russian President Dmitry Medvedev (R) autographs a car at the factory of US auto-maker General Motors (GM) in Shushary, outside of St. Petersburg, on November 7, 2008. GM opened its doors in Shushary for production on November 7, representing an investment 3 million US dollars (2.33 million euros) according to a statement. AFP PHOTO/RIA NOVOSTI/KREMLIN POOL/DMITRY ASTAKHOV (Photo credit should read DMITRY ASTAKHOV/AFP/Getty Images)
DMITRY ASTAKHOV/AFP--Getty Images

General Motors Corp. (GM) is giving up on the mass market in Russia, shuttering a $300 million plant in St. Petersburg less than eight years after it started production there.

It’s a landmark moment in the slow decay of Russia’s economy under the weight of falling oil prices and western sanctions, a consequence of the collapse in Russians’ spending power over the last year. The ruble had lost half its value against the dollar in 2014 and the Central Bank had jacked up interest rates to 17% to stop it falling further, strangling the supply of credit.

GM said in a statement that it will take a $600 million charge against first-quarter earnings and idles the plant, where it makes Chevrolet and Opel models, by the middle of the year. It will also stop a joint-venture assembly for Chevy models at local carmaker GAZ in Nizhny Novgorod, although a separate partnership with Avtovaz, Russia’s largest car maker, will continue to make the Chevy Niva jeep. It will also continue to export Cadillac and U.S. built models like the Tahoe, Corvette and Camaro to the country.

GM’s plant, which employs 1,500 people, was part of a cluster of new factories built in and around St. Petersburg in the last decade, a cluster that Putin showcased as proof of his ability to attract foreign investment and create stable, well-paid jobs. The project carried particular importance for Putin because St. Petersburg is his hometown.

GM was too polite to lay the blame at Putin’s door for what has happened since (even though Putin was happy to take the credit for personally ordering the annexation of Crimea at the weekend). And unlike Caterpillar Inc.’s (CAT) chairman and CEO Doug Oberhelman last week, President Dan Ammann didn’t call for a “some kind of a regime change” to remedy the situation.

Ammann said only that “this decision avoids significant investment into a market that has very challenging long-term prospects.”

GM wasn’t the first foreign carmaker to set up in St. Petersburg. Ford Motor Co. (F) had been operating down the road at Vsevolozhsk for six years already when GM started producing. But when it opened, GM, like every other carmaker around, expected Russia to be Europe’s biggest market within a decade. Within a couple of years, it had set up 158 dealerships in 94 cities across the country.

Those forecasts look badly outdated now. Car sales fell 10.3% last year, and are expected to fall another 24% this year, according to the Association of European Businesses in Russia. GM fared worse than the overall market, with Chevy sales down 29% and Opel sales down 20%. The figures for the first two months of this year are even worse, with Chevy and Opel down 71% and 82% on a year earlier (the overall market is down a mere 38%).

Meanwhile, Ford’s Vsevolozhsk plant, like many others, is working reduced shifts (operating only four days a week) and struggling with labor unrest as inflation outstrips pay. The government, for its part, last year threw 50 billion rubles ($820 million) in subsidies at the car industry last year to stop it cutting jobs, and plans another 60 billion this year.

“Industry sentiment is that the next few months will be very difficult, and that the market bottom has yet to be found,” says Joerg Schreiber, head of the AEB’s automakers’ committee. “Market participants will need patience and a long breath.”