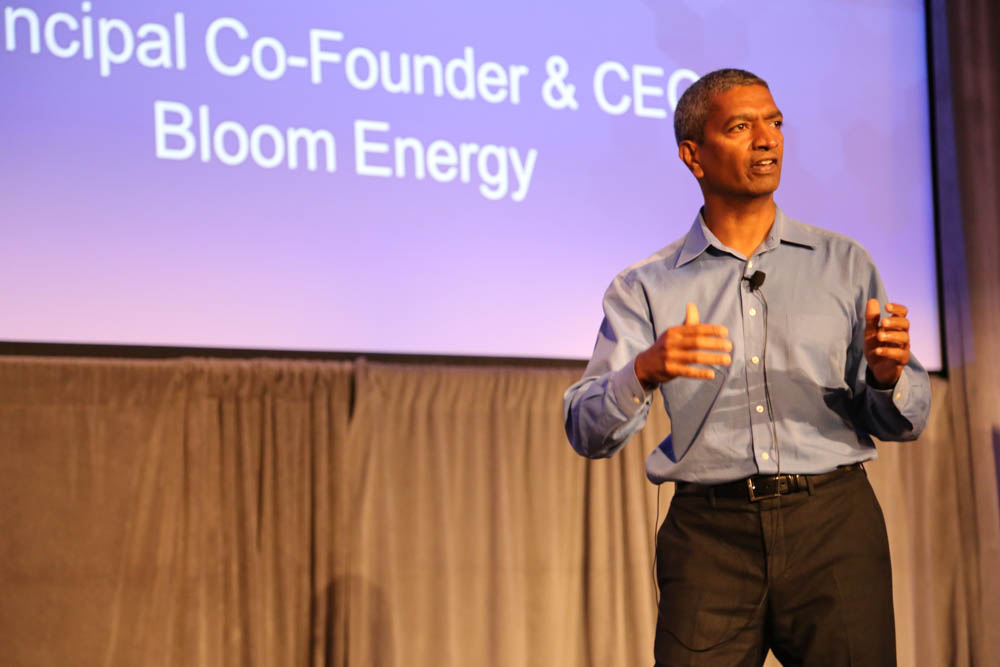 When I heard that Bloom Energy CEO KR Sridhar was planning to speak this week in San Francisco, I made sure to arrive early and sit in the front. Sridhar rarely speaks publicly, even though his 14 year-old Silicon Valley company has raised over a billion dollars in funding and had been expected to IPO by last year.

But in a 15-minute talk about the rather dry concept of “cleantech-as-a-service,” Sridhar managed to say so little about the current state of his fuel cell company that audience members (like myself) were just left bewildered:

Sridhar’s answers to a couple questions from the conference organizer were equally non-informative. In response to one about what’s in store for Bloom over the next year or two, Sridhar began: “We are just constantly focused on building a great company.” Immediately following his muted talk he dashed off; the company denied my prior request for an interview.

So we’re basically left to wonder about the future of a company that was supposed to be public by now. For example, Bloom investor and board member Scott Sandell told Reuters in 2012 that the company likely would attempt an IPO in late 2013 or early 2014. Two years earlier, a different Bloom investor told Fortune‘s Dan Primack to expect an IPO in 2011 with a valuation of “at least” $20 billion.

We also don’t know if the company is profitable. In early 2013, Primack reported that Bloom was telling investors that it remained on track to become profitable in the second half of 2013. The year earlier, CFO Bill Kurtz told Fortune that the company was “operating with a fully funded business plan.” That was before the company raised $130 million. And then another $130 million.

If Bloom isn’t able to go public soon, it could be in a tight spot. After all, VC-backed companies don’t usually remain private for more than a decade.

“Anything less than an IPO or a big acquisition would be a disappointment to the firm’s investors and shareholders, writes Greentech Media’s Eric Wesoff. “Look for some rumored executive changes at Bloom in 2015,”

It should also be remembered that Bloom Energy is tackling one of the world’s most difficult problems, and the fuel cell industry has been littered with companies that have struggled. One of the key issues with fuel cells is that a main component of it (called the stack) can be relatively short-lived and usually needs to be replaced every few years (estimates vary), which can make maintaining and selling fuel cells inherently expensive.

Scott Sandell told me at Bloom’s launch event five years ago that the company’s goal was to reduce the manufacturing price of its fuel cells by 60 to 70%, but there is still no word on if those promises were kept. Or do we know if its costs outweigh its ability to sign up and deliver product to new customers.

In Sridhar’s talk on Tuesday morning, he briefly discussed “personalized electricity,” saying that “it’s the early days of bringing that cost down as effectively and quickly as we can.” It remains to be seen if Bloom has been able to (or will be able to) bring the costs down fast enough to entice public market investors, or satisfy its private ones.