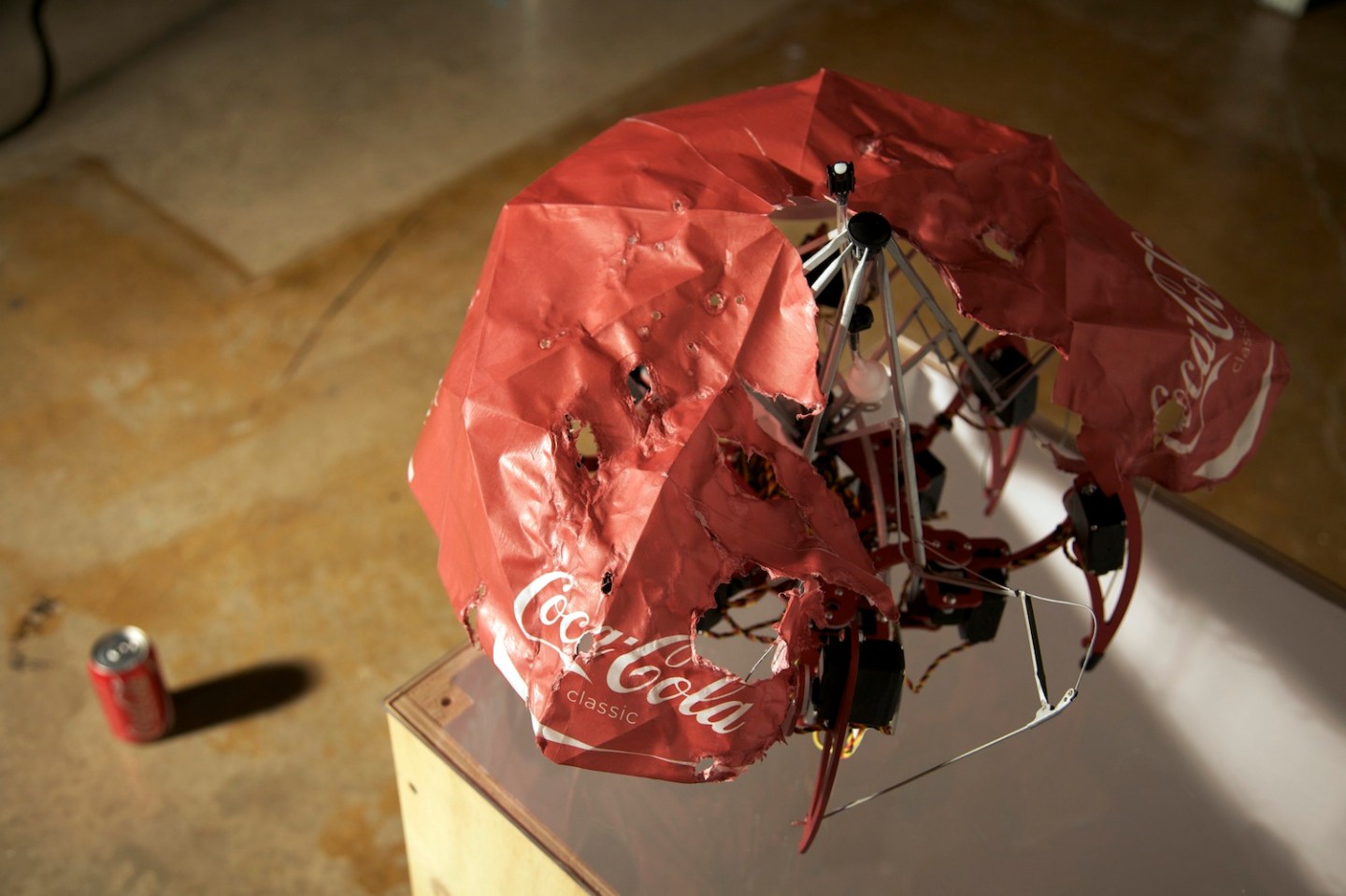 "Coke Is It."
Courtesy of Matt Kenyon

Artist Matt Kenyon is interested in the impact corporations have on society, but it’s fair to say his perspective is more than a little different from the typical Fortune reader. The 37-year-old teaches at the University of Michigan’s design school, and his art practice is called SWAMP, or Studies of Work Atmosphere and Mass Production.

To quote from Kenyon’s web site, SWAMP “focuses on critical themes addressing the effects of global corporate operations, mass media and communication, military- industrial complexes, and general meditations on the liminal area between life and artificial life.” Kenyon has been named a 2015 TED Fellow, and he will present an example of his work at the celebrated technology and design conference, which begins March 16 in Vancouver.

Curious to hear more about his unique take on all things corporate, I caught up with Kenyon by telephone ahead of the conference. An edited version of our conversation follows.

Fortune: Share an example of your art that explores the corporate world.

I’ve looked at Coca-Cola (KO), the world’s largest beverage company. Their logo, their branding is one of most recognizable images around the word. One of my projects on this theme was “Coke Is It.” It’s a robotic umbrella that drinks Coke off the floor and then spews it out as rain, which then eats through the umbrella. It shows the toxic makeup of everyday products corporations produce. I often have a robotic element in work which stands in for corporate systems or consumer-level systems, and shifts with material like Coca-Cola or fast-food drive through drive-in windows. This is how I expose contradictory elements in either consumer or corporate behavior.

What’s another Fortune 500 company that has featured in your work?

Another project was Spore, a self-contained ecosystem of a rubber tree plant purchased at Home Depot (HD). I made this work back in the early 2000s at height of the recent U.S. housing bubble. Home Depot devised a strategy to compete against Lowe’s (LOW) as well as mom-and-pop competitors. Its strategy was a very liberal return policy: They guaranteed the life of every plant they sold. If it died for any reason, all you needed to do was bring the dead plant back to the store with your receipt and they would replace it with another live plant at no additional charge.

That’s a corporate strategy that I found fascinating. I designed a system to water the plant whenever Home Depot’s stock went up, and to not water it when the stock went down. Something surprising happened. Despite Home Depot’s growth, the plants kept dying. It was a metaphor: When we reduce our picture just down to only one variable—something like growth—it hurts biological life. The market only looks at growth at the exclusion of a great deal of other important information. It doesn’t look at our relationship to the environment or to labor. It’s strange to me that companies sell other organisms, that they can claim to guarantee life. It functions in an interesting way, an almost an anti-market way, to push out other competitors. But the guarantee, the unlimited return policy, was a false one: We can operate at a loss in a certain area in order to drive out the competition.

I assume you’re familiar with the corporate concept of a loss leader, that selling something at a loss is designed not so much to kill the competition as to entice customers to buy a higher-margin product?

I’m equally fascinated and repelled by some of these things. For a long time I became interested in looking at these companies as if they are organisms themselves. What I take issue with is when their growth comes at the expense of real people. When you apply that to something as simple as the rubber tree plant it shows that too much growth, just like too little growth, is incompatible to biological life.

Your projects often have long lifespans themselves, right?

Yes. Many years later I re-installed Spore at the Museum of Contemporary Art Detroit in a three-person exhibition called Inhabitation, with Osman Khan and Jason Ferguson. The show dealt directly with the idea of housing from multiple perspectives, including the rise and fall of the local market of Detroit. For Inhabitation, I built an artwork titled Cloud that produced artificial clouds in the shape of houses. I designed Cloud to visualize the last 15 years into 15 minutes: Clouds fly up and stick to the ceiling, and then over time drift back down. And when they fall down they resemble some of these derelict houses that have become all too familiar.

You have a lot to say about politics. How do you describe your discipline? What are you professionally?

I’m an artist. I was trained as a painter and studied printmaking. After college, I stopped making paintings and images of systems and started making the actual systems as my work.

Where are you from?

I grew up in Baton Rouge, spent part of my childhood in the middle-of-nowhere, Kansas. I live in Ann Arbor, Mich., and teach at the Stamps School of Art & Design at University of Michigan. I teach game design and app development. I’m especially interested in classes that use technology to address wicked problems in individualized medicine. I have wonderful and talented students.

You’re quite critical of the corporate world. How would you describe your relationship with capitalism, given that you spend so much time thinking about it?

I’m simultaneously fascinated and repulsed by capitalism. I’m interested in how people find patterns in the noise of markets and in the relationship between faith and trust. I’m also interested in the spectacle of wealth creation.

How do you describe your politics?

I’m pretty left-leaning. My childhood was a mix of left and right. I grew up in a house with veterans, with folks who served in foreign wars. As a consequence of that I spent a good deal of my life being critical of U.S. foreign policy.

What are you looking forward to about TED?

I’m really excited to meet my fellow fellows, who are a really great group of folks, an interdisciplinary A-team. That’s my primary interest, to build my network of people who are tackling these things from different perspectives.

If you had the opportunity, what would you tell leaders of the companies that make up the Fortune 500?

I’d talk to them about influence. We’re living in a time of unprecedented influence in the form of special-interest lobbying, of short-term focus, and political influence being purchased, resulting in over-influence over markets and democratic systems. I’d talk to them about how that short-term benefit is damning and unsustainable in the long term. We need to have a more equal representation. Corporate power puts its thumbs on the scales.