Uber wants to recruit a million women drivers: Here’s why that’s going to be really hard 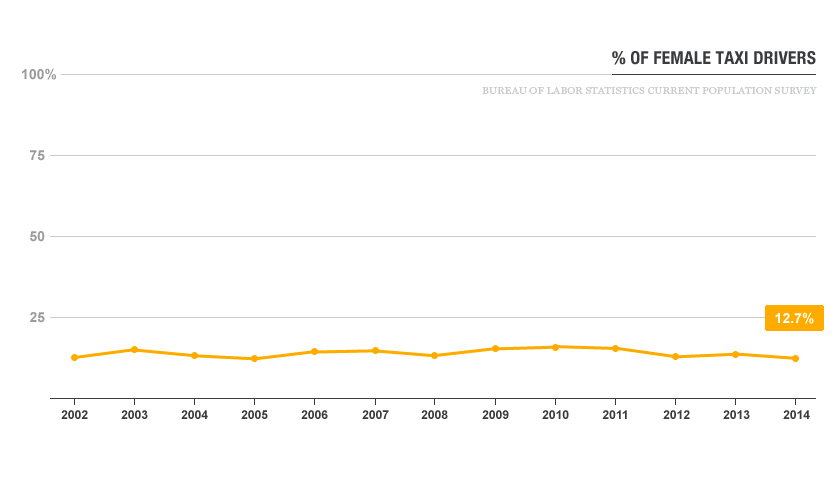 On Tuesday, ride-sharing platform Uber announced an initiative to create 1 million jobs for female drivers by 2020 as a way to “[accelerate] economic opportunity for women.”

It’s an admirable goal, especially for a company criticized for sexist ads and dismissing concerns about female passengers’ safety. But to achieve it, Uber will have to buck the taxi industry’s current and historic demographic trends.

There’s no doubt about it; chauffeuring and taxi driving is overwhelmingly male. Women, it seems, just don’t want to be your cabbie.

According to the Bureau of Labor Statistics, in 2014, of the 383,000 workers in the taxi driver and chauffeur occupation nationwide, 12.7% were women. Looking back over the last 12 years of data, that percentage has hardly budged. It was 12.4% in 2002, hit 16% in 2006, but then inched its way back down to the current level. In New York City, where more than 50,000 drivers sat behind the wheel of the city’s taxis in 2014, women made up just 1% of drivers. In September, SheTaxis, an app-based car service by women, for women, delayed the launch of its operations on account of a female driver shortage.

Compared to those rates, Uber actually has a leg up. Of its 160,000 drivers in the United States, 14% are female, according to the company.

But attracting more women will be tough, says Graham Hodges, a Colgate University history professor and the author of Taxi!: A Social History of the New York City Cabdriver, since taxi driving “has always been a male purview.”

Uber says it will achieve its 1 million female driver goal by “invest[ing] in long-term programs in local communities,” but it did not immediately respond to a request to explain what those programs will entail.

It’s difficult to identify a specific explanation for the dearth of women taxi drivers. Hodges points to the lingering effects of a historical notion that a city’s streets “are very much a male arena.”

“There were instances in the pre-Civil War era when women walking on the street were arrested because police presumed they were prostitutes,” he notes. “That changed a bit with the introduction of the Ladies Mile [shopping district] and with more liberated women in the 1910s and 1920s.” But even today, Hodges says, “taxi driving is considered a low-prestige, somewhat dangerous occupation. You’re dealing with the public at its worst; they’re often drunk, abusive, or try to skip out on fares.”

Bhairavi Desai, executive director of the New York Taxi Workers Alliance, agrees that the danger of the job is a turnoff for women. She said that taxi drivers are more likely to be assaulted or robbed than other types of workers. Indeed, the Occupational Safety and Health Administration says that taxi drivers are 20 times more likely to be murdered on the job than other workers. “You’re putting your life in the hands of a total stranger,” Desai told Fortune. And it’s not as if there’s a huge payoff for incurring that risk: The job will earn you median pay of $10.97 per hour or $22,820 per year and requires less than a high school degree.

To make a living as a taxi driver, you need to work the job full-time, Desai says. By her estimates, taxi drivers in New York City work an average of 60 hours per week—that kind of commitment could pose a challenge for a working mother. The New York City Taxi and Limousine Commission says the average driver shift is 9.5 hours. The small number of female taxi drivers “speaks to the fact that we live in a world where raising children still falls on the shoulders of women,” says Desai.

In a video that accompanied its announcement on Tuesday, Uber touted its drivers’ flexible hours and entrepreneurial opportunities as big upsides for women. But just like driving a traditional taxi, it’s still a job where the fundamental duty involves picking up strangers—alone—and inviting them into your car. It’s a task that’s unappealing at its core, Hodges says, and it can be especially so to women who are perceived to be more vulnerable to harassment or attack.

In explaining men’s dominance of the taxi driving field, Hodges also points to the large number of immigrants who take to the profession. In New York City in 2014, about 95% of taxi drivers were born outside of the United States. More than a fifth of drivers hail from Bangladesh; about 13% were born in Pakistan. He surmises that some of those drivers may have emigrated to the United States to support family members in home countries where a man is expected to be the primary breadwinner.

Desai of the New York Taxi Workers Alliance takes issue with such assumptions. She says that her Alliance has female members from the Nepalese community who are driving taxis in New York City to earn money for their spouses and children back home.

Once upon a time, female cab drivers did have a kind of heyday. During World War II—like they did in so many professions—women assumed the roles of taxi drivers because there were very few men available to do the job, Hodges says. But once men returned from war, women handed over the keys.