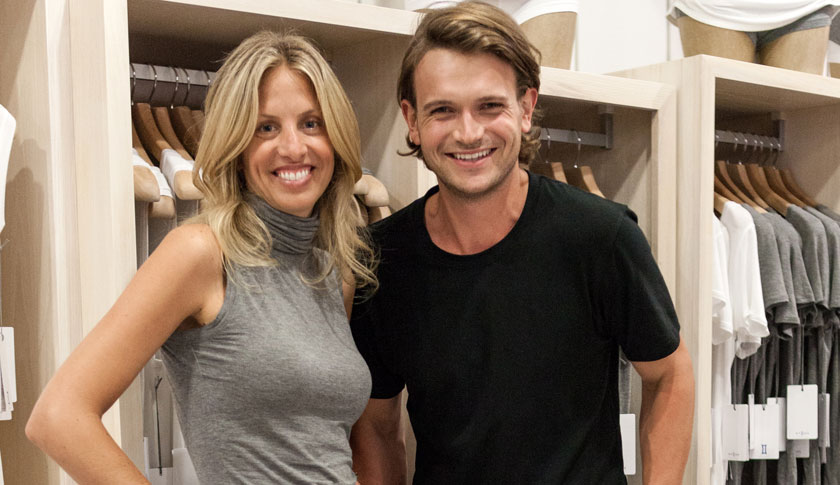 Courtesy of Kit and Ace

The family behind Lululemon has got what it hopes will be a big second act: take what’s great about workout wear and apply it to luxury clothes.

Kit and Ace is a small apparel and retail brand that was founded last year by Shannon and J.J. Wilson–the wife and son of Lululemon (LULU) founder Chip. Based in Vancouver, Canada, the company produces sweaters and pullovers that are made of “Qemir,” a “technical cashmere” fabric that can be tossed into a washer and dryer without risk of shrinkage or pilling. No expensive dry cleaning needed.

Already, Kit and Ace is seeing some early success. The stores it has opened since August are doing better than expected, according to the founders, though the privately-held apparel company won’t disclose total sales figures.

Kit and Ace President and Creative Director Shannon Wilson said she is targeting a sliver of the apparel market that hasn’t yet been conquered: making luxurious materials more “user friendly.” A former Lululemon designer, Wilson spent 15 years working on athletic wear on a daily basis, and a lot of that time she said she wondered why luxury brands couldn’t be as comfortable and durable as, say, yoga pants.

“I saw a real opportunity to take luxury fibers like cashmere and build into it the technology of stretch, movement and washability,” Wilson told Fortune. “I wanted them to be more user friendly.”

Kit and Ace thinks comfy street wear will become a more dominate force in apparel. It is a step forward from the prevailing “athleisure” trend of today–yoga pants, tights and other athletic gear that is being used not just to-and-from the gym, but also for walking around town.

The Wilson family is planning to expand the Kit and Ace brand to over 30 stores this year. It truly is a business built on the back of Lululemon’s success: Kit and Ace has done no rounds of financing and is completely self-funded. “I am so excited for Kit and Ace because it is where street clothing is going,” Chip Wilson, Shannon’s husband, said in a release last month. “Shannon and J.J. have caught the next wave.”

Earlier this year, Chip stepped down from Lululemon’s board, saying he wanted to spend more time working on the new family business Kit and Ace. He had played a critical role in growing Lululemon, from $41 million in revenue in 2004 to an estimated $1.8 billion a decade later. Though Lululemon ran into some trouble with some questions about the quality of the fabric used in its yoga pants, net revenue for the first three quarters of fiscal 2014 increased 12%.

Wilson’s relationship with Lululemon was at times contentious, especially after he stepped down as non-executive chairman in 2013. Shannon says Chip hasn’t yet taken an active role at her new company and is simply serving as an advisor.

Could Lululemon serve as a blueprint for Kit and Ace? So far, the two share some similarities. Like Lululemon, Kit and Ace is focusing greatly on the quality and feel of its apparel, and the price points are high. Both companies also are based in Vancouver, and there are even some similarities in the colors – dark blues and gray shades – used by both brands.

The retail-apparel strategy is also similar: Kit and Ace doesn’t plan to sell through wholesalers and instead will own its own retail stores. (Other brands, such as Nike and Under Armour, have stores but sell gear primarily through other retailers.)

Ron Friedman, a retail consultant for accounting and advisory firm Marcum LLP, touts the Kit and Ace strategy as the “future of apparel.” Gross profit margins can reach between 65% to 75% with the business model Kit and Ace is pursuing, as opposed to margins that can range from 20% to about 55% when sold through mass retail chains.

“[Kit and Ace] is a great looking line,” Friedman said. “I think they are creating something that should be very exciting.”

There are a few key differences. Lululemon started out as a maker of yoga wear and has since expanded into the running category and more recently, everyday attire. Kit and Ace is focused on comfortable street wear exclusively. Both target Millennials, but Kit and Ace has achieved a better gender balance. Men’s apparel makes up roughly a third of sales, while at Lululemon, men’s sales make up about 14% of the business at each store.

And for her part, Shannon Wilson says she doesn’t mind the Lululemon comparisons.

“I take it as quite a compliment,” Wilson said. “Lululemon is a hugely successful brand with hundreds of stores and thousands of employees. That’s not us — we aren’t there yet.”