Why better burgers are here to stay 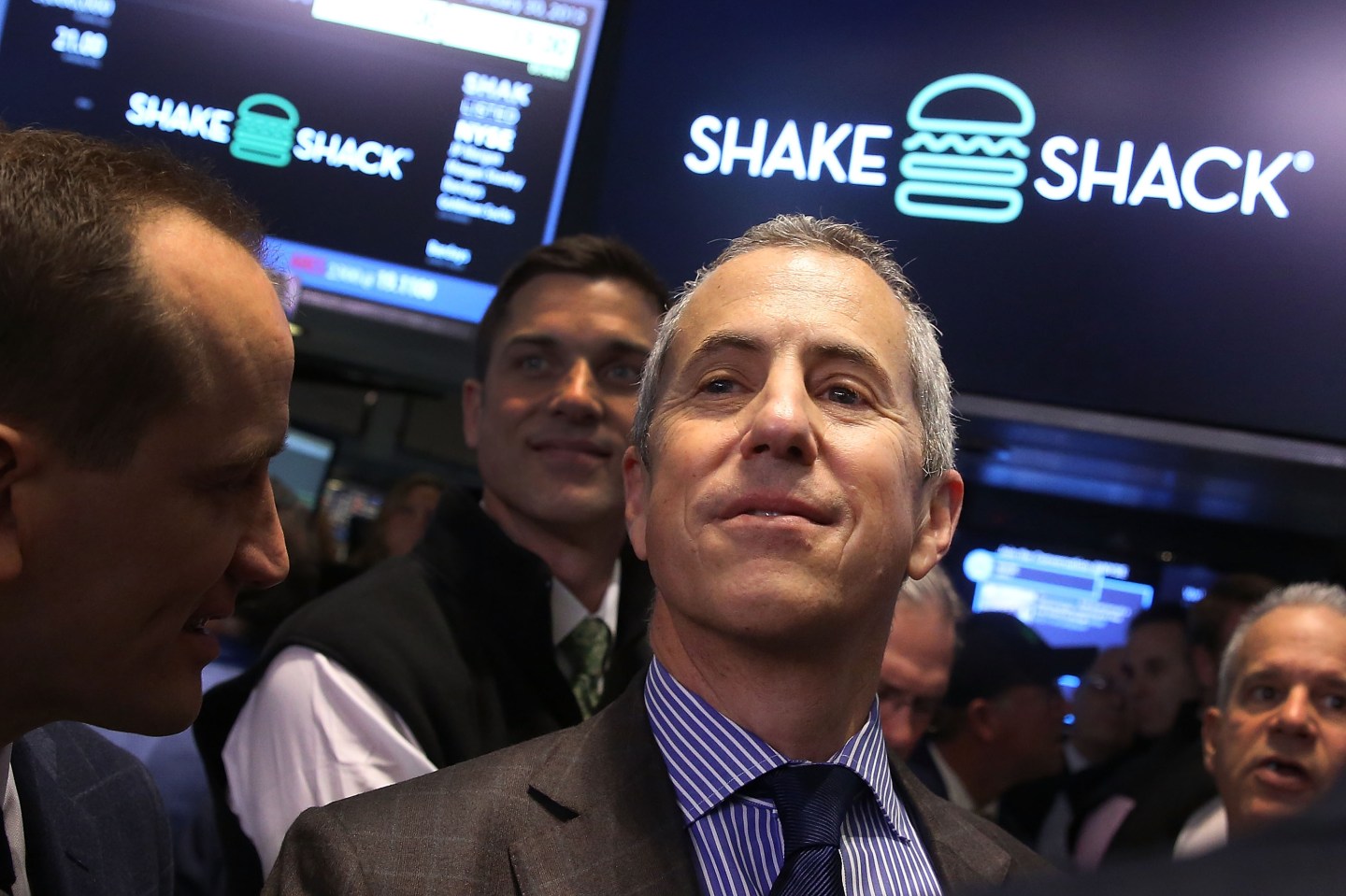 NEW YORK, NY - JANUARY 30: Founder and Chairman of Shake Shack, Danny Meyer, visits the floor of the New York Stock Exchange (NYSE) on January 30, 2015 in New York City. Hamburger chain Shake Shack rose more than 130 percent in its trading debut on the NYSE Friday. Shares for the New York based burger chain opened at $47 and quickly climbed above $52 before dipping back to $48.77 for a 132 percent advance. (Photo by Spencer Platt/Getty Images)
Photograph by Spencer Platt — Getty Images

Famed restaurateur Danny Meyer has been in the business for 30 years, has a few Michelin stars under his belt, and is cooking up a burger empire. Nonetheless, he was still surprised by what he sees as one of the biggest shifts in the restaurant industry in decades: the convergence of fine and casual dining.

“No change whatsoever has floored me any more than the one we’re going through right now,” he said at TedXManhattan’s fifth annual “Changing the Way We Eat” conference on Saturday.

Meyer told Fortune in a one-on-one interview that there was a time when chain and fine dining restaurants were as diametrically opposed as they could possibly be. “We didn’t want to be seen anywhere near a chain restaurant,” he said. “They thought we were just a bunch of stuck-up people who didn’t understand the world.”

Meyer’s high-end burger chain Shake Shack has brought him new attention, but the vast majority of his career has been spent in fine dining, beginning with the 1985 opening of Union Square Café, which is still going strong 30 years later. It took him almost a decade to open his second restaurant, Gramercy Tavern, because he’d always bought into the notion that an owner had to be on the premises.

Shake Shack (SHAK), which reports fourth quarter and annual earnings tomorrow, came about as an accident. “We didn’t intend to build a chain,” Meyer said. The goal was to bring more people to Madison Square Park a decade ago to help revitalize the area. All of the food came from his high-end restaurant Eleven Madison Park, which proved that he could have the same quality of ingredients at a more accessible price. (Meyer sold Eleven Madison Park in 2011).

The following are edited excerpts from his conversation with Fortune.

Meyer: Food activists and consumers have long been demanding better-sourced and better-tasting food, and they have not been getting it from chains. Meanwhile, every city in the country today has one or two or three restaurants whose chef comes from the Culinary Institute of America or the French Culinary Institute [now known as the International Culinary Center]. You can’t go back once you’ve eaten good food.

Also, once we [restaurateurs] lost our virginity and got our second or third fine-dining restaurant, we realized that we weren’t going to be cast aside by the public and restaurant critics. Then we started to say, “Whoever wrote the rule that we can’t replicate the same restaurant more than once?”

Was Shake Shack your way of making the good things about fine dining more accessible?

Absolutely. There are many players in the category that I’m calling fine casual. It’s happening with salads, sandwiches, pizza, and it’s been happening with Mexican for some time. There’s no going back. I know my kids are never going to eat fast food, but they still want convenience and a savings of time.

We source the exact same ingredients that we would in any of our three-star restaurants—all natural, growth-hormone-free, antibiotic-free, cage-free eggs—and care for communities, hire, and train people the same way. We do it by stripping away things that sometimes you don’t need like waiters and waitresses, bartenders, maître d’s, table cloths, a pastry chef on the premises. We can offer the same quality of cooking and food for a dramatically lower price than fine dining and at incrementally higher price than fast food. If you grew up on fast food, for maybe 50% more you can eat like the fine dining guys, and if you’re used to eating at a fine dining restaurant, for 80% less you can put on blue jeans and just have fun.

I believe that some of the highly trained chefs and restaurateurs who came into fine dining, who have really good taste that’s consistent with what the millennials want, are finding it easier to learn the systems it takes to replicate that than some of the folks who are great at replicating are finding it to learn taste. Some of the people who are geniuses at the systems got so big that it’s going to be really hard to retrofit taste.

Are you talking about McDonald’s?

I’m not talking about anyone specifically. But I do know that change is hard even for a law firm of two partners. It’s definitely hard for a human organization of any type when you get to be really, really big. I think it’s easier in some respects to be growing up now than trying to renovate your house.

For all of the troubles that some people ascribe to fast food and some huge causal chains, let’s face it, they are in a size that would be enviable if you were starting from scratch. And a lot of people who go there have never heard of and will never hear of or care about Shake Shack. It’s not what they want. You can’t really turn your back on that customer just to make Wall Street happy. So it’s an interesting conundrum.

Do you think there’s a better burger bubble?

Absolutely not. There have been a couple in recent years—froyo, cupcakes—where one could legitimately ask the question, is this just a fad or is this here to stay? But Shake Shack and others did not invent the hamburger. It is America’s favorite, it’s been around forever, and it’s going to be around for a long time, not just in America but around the world. I can’t be convinced that if you like burgers you wouldn’t always prefer to have one that’s even better. It’s a huge market, and the better burger category occupies a tiny percentage of an enormous category.

Are you taking share from fast food or are you appealing to a different customer?