Book value: ‘The Age of Cryptocurrency’ 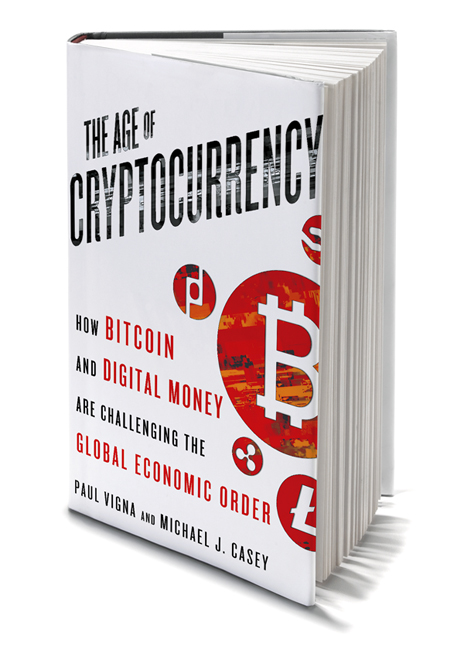 Call it the bitcoin book boom.

In the past year hundreds of books were published on the cryptocurrency (which was the single worst-performing medium of exchange last year). Yet despite the media buzz and the wealth of private investment, most people don’t know or care about bitcoin.

The book that most convincingly argues why that could soon change is The Age of Cryptocurrency: How Bitcoin and Digital Money are Challenging the Global Economic Order by Wall Street Journal reporters Paul Vigna and Michael Casey. They begin with the story of a young woman in Afghanistan with no bank account. She’s able to receive payment instantly and securely for the work she does for a U.S. film blog using the e-currency. It cuts out the middleman; gone is the typical two-day bank delay in processing. (Never mind that the value of her payment is subject to change abruptly.)

An anonymous, peer-to-peer, unregulated network for payments may sound scary to some. But the potential it has to ease the exchange of any kind of value (the “block chain,” bitcoin’s public ledger, can support a variety of decentralized applications, such as secure storage of documents) is exciting. And it is beginning to interest not just the early group that Vigna and Casey aptly describe as, “a small, fiercely dedicated band of tech-minded, libertarian-leaning digital utopians.”

As Vigna and Casey know all too well, their book is hardly first to the market. But they have produced more than a bitcoin 101: theirs is a smarter, more holistic take on not just bitcoin, but the potential of all digital currencies to change the way we send each other money. In fact, it goes deeper than the average mildly interested reader likely cares to dig (the book gets a little bogged down in an exploration of the crash of bitcoin exchange Mt. Gox). But for those on the outside looking in, it is interesting and lucid enough to hold attention while it educates you.

While the authors are certainly bitcoin believers­­—declaring that the currency will make entrenched systems “look as antiquated as Gutenberg’s printing press”—they’re also careful to note it might still fail spectacularly. Success, they say, “is still a big if.”

A shorter version of this book review appeared in the March 15, 2015 issue of Fortune.