Why aren’t there more women in the workforce? 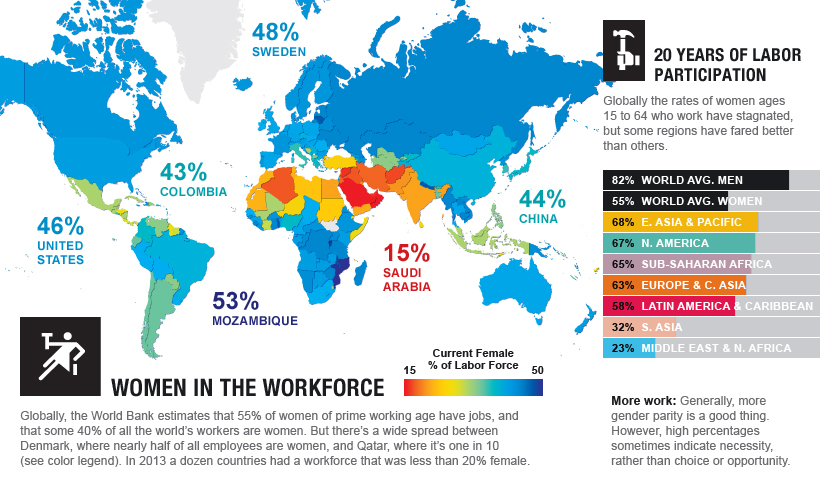 If you’re a woman living in Uganda, Namibia, Ghana, or Nigeria (Africa’s largest economy), you are three times more likely than your husband, son, or brother to run a business.

But if you live in North Africa or the Middle East, forget it: The men in your life are three times more likely to own businesses—and you are no more likely to have a salaried job than you were two decades ago. By contrast, a woman born in Latin America is now 20% more likely to be part of the workforce.

Those are some of the fits and starts on women’s economic progress revealed in our exclusive look at a new report from Hillary and Chelsea Clinton’s No Ceilings: The Full Participation Project, the findings of which will be released on Monday. What’s especially striking is that women around the world are healthier and more educated, but no more likely to be collecting a paycheck than they were 20 years ago.

In fact, the percentage of women in the global workforce has stagnated at about 55%. And while labor participation rates for men actually dipped (to 82%)—and many women who work in the “informal” economy aren’t counted—the yawning male-female gap hasn’t been dented.

The No Ceilings report, produced in conjunction with the Gates Foundation and other groups, aggregates data from existing research to measure the progress of women globally since 1995, when the United Nations convened its much-heralded conference in Beijing on the status of women—and First Lady Clinton famously equated women’s rights with human rights.

As Secretary of State, Clinton repeatedly made an economic case for improving the status of women, citing research showing the benefits to a country’s GDP. As the report notes, “Closing the gap in women’s labor force participation across OECD countries is estimated to lead to average GDP gains of 12% by 2030, including almost 20% in Japan and Korea, about 10% in the United States, and more than 22% in Italy.”

Nevertheless, “there are cultural norms that really challenge women,” notes No Ceilings director Terri McCullough. Take Asia: In China, 64% of adult women work in the growing economy. But in Japan—despite a longer history of modernity and high education rates—only 49% work, largely because of a social bias toward stay-at-home moms. Prime Minister Shinzo Abe—hoping to jump-start an ailing, aging economy—is trying to reverse that with policies encouraging women to work.

It’s a lesson that the new leaders of economic basketcase Greece, where only 44% of women work, might consider borrowing. The same goes for India Prime Minister Narendra Modi as he tries to build a world-class economy; there, only 27% of women work. It was higher a decade ago.

Interestingly, those same 2013 World Bank figures show the highest numbers of working women in African countries like Benin, Burkina Faso, Ethiopia, and Kenya. The lowest numbers in the world are in conservative Islamic strongholds like Iran, Iraq, Jordan, and Saudi Arabia (though Saudi women’s number are growing).

The No Ceilings report offers some informational nuggets that weren’t available—or no one was even thinking about—back in 1995. Like this new barrier: 200 million fewer women than men in developing countries have access to online technology.

Female college attendance in developed countries has surpassed that of men and the No Ceilings report concludes that more women around the world are moving into management. Still, C-Suite women remain a rare commodity. Since 1995, the share of female Fortune 500 CEO’s rose from zero to just under 5% in 2014.

And despite research showing that having women on corporate boards pays off in better corporate performance, women hold only 19% of S&P 500 board seats in the U.S. (up from 14% in 2006).

With Hillary Clinton’s expected presidential run in the offing, the report is certain to feed some charged political debates: It points out that the U.S. is the only high-income country without mandated paid maternity leave—alongside such countries as Micronesia, Papua New Guinea, and Tonga. The continued wage gap between men and women is also highlighted, though conservative critics charge that these numbers are misleading—failing to take into account hours worked, interrupted years from childbearing, and choices in occupation. One thing about women’s progress (or lack thereof) that’s guaranteed? We’ll be hearing a lot more about it before next November.

To read Chelsea Clinton’s interview with Fortune about the report click here.

A shorter version of this story appeared in the March 15, 2015 issue of Fortune.