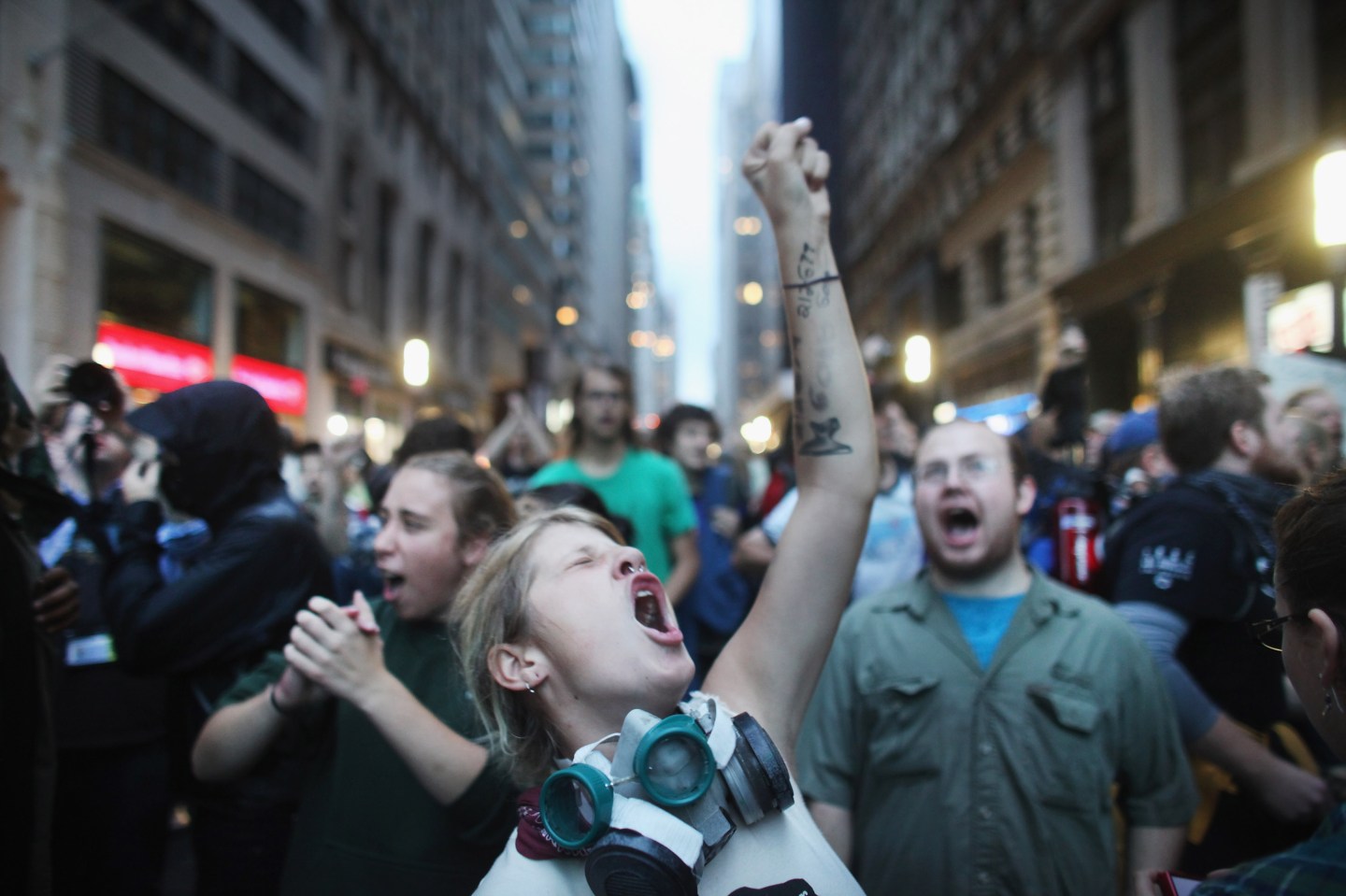 Michael Kazin, co-editor of the left-wing magazine Dissent, posed a simple question in a recent article: If wealth and income inequality levels are as bad as they are portrayed in popular media, “why aren’t people taking to the streets?”

The statistics that describe the magnitude of economic inequality are stark. Before taking into account the effects of redistributive government programs, the richest 1% of Americans make 20% of the income. Wealth inequality is even more extreme, with a recent study estimating that in America, the wealthiest 160,000 families have as much as the poorest 145 million families.

Such figures are rallying points for a specific strain of economic populism in America, manifested most saliently in the Occupy Wall Street movement. Occupy brought to the fore the idea that the nation is divided between a small group of haves and an increasingly large group of have-nots.

But if this is really the case, why aren’t Americans taking to the streets? They are not rioting, or even organizing to demand that the government solve the problems of inequality. And, in fact, poll numbers suggest Americans believe the government spends too much on the poor or is otherwise too involved in the economy.

Why do the statistics that supposedly describe the economic reality and Americans perceptions of that reality differ so much? For one, government programs do help—to a degree—cushion economic blows and redistribute wealth. But more importantly, the statistics that are trumpeted in much of the media do a poor job of describing the fluidity of the American economy.

A study published in January by sociologists Thomas Hirschl of Cornell University and Mark Rank of Washington University paints a much more nuanced picture. They use data from the government-sponsored Panel Study on Income Dynamics (PSID), which interviewed thousands of families from 1968 through 2011 to understand how these families’ economic fortunes evolved over time. The data paints a picture of a fluid economic order.

PSID data show that by age 60:

– 70% of the population will have experienced at least one year within the top 20th percentile of income;

– 53% of the population will have experienced at least one year within the top 10th percentile of income; and

– 11.1% of the population will have found themselves in the much-maligned 1% of earners for at least one year of their lives.

At the same time, it’s much more rare for a person to reach the top 1% and stay there. According to PSID data, only 0.6% of the population will experience 10 consecutive years in the top 1% of earners.

The fluidity cuts both ways. Rank and Hirschl pointed out in their 2014 book Chasing the American Dream that some 45% of Americans will take advantage of a need-based welfare program, like Medicaid or food stamps, by age 60. And 54% of Americans will experience at least one year of poverty by the same age.

Just because there is a good deal of changeability in America’s class structure, that doesn’t mean that everyone has the same chances at achieving high levels of income. Compared with many of its wealthy peers, there is much less inter-generational economic mobility in the U.S. If you are born poor in America, you have a much greater chance of staying poor than if you were born into the same class in places like Canada or Denmark.

But in the American economy, a given individual will experience a wide array of economic circumstances throughout their lives. This is why, for instance, aspirational advertising campaigns are so effective: because millions of Americans really do climb the economic ladder over the course of their lives.

This insight is also useful in politics. Liberals often marvel at the phenomenon of citizens in conservative states who vote “against their own economic interests.” But many of these people may very well have been in the top tiers of earners at some point in their lives, and they may expect to get back to that lofty perch again.

Income and wealth inequality will continue to shape the world for years to come, and they are not issues the business community can ignore. But when you take a closer look at the data, you see that class in America is much more complicated than a simple story of the 1% against the 99%. Why aren’t Americans taking to the streets, ready to fight the next class war? It’s because many of us wouldn’t know which side we’re on.