Is Botox becoming part of the Wall Street dress code? 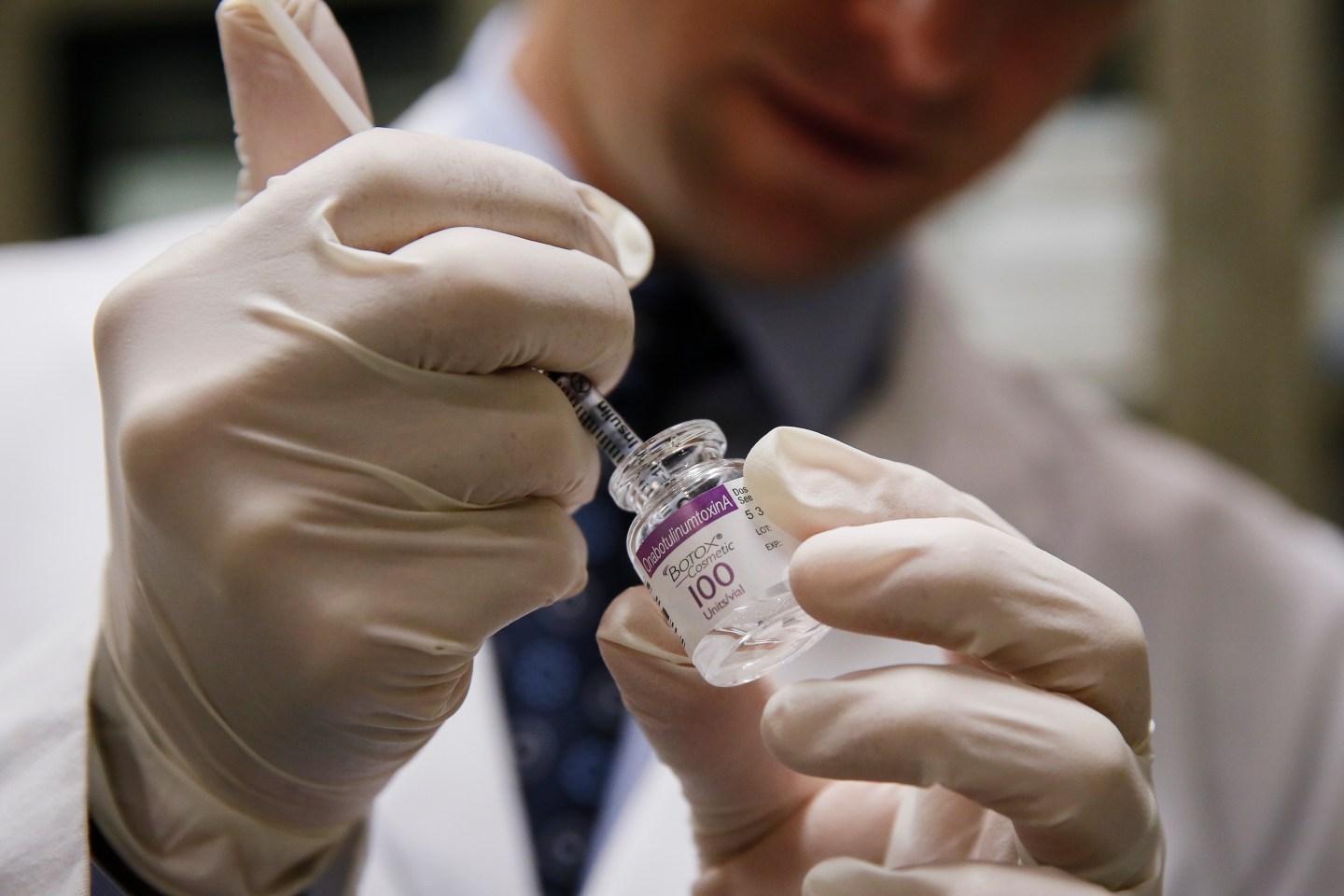 Every profession has a dress code, whether spoken or unspoken. For men on Wall Street, it’s a pretty stringent one. That suit had better be navy blue, that tie had better be in a Windsor knot and if you want to express yourself with your clothes, your exit interview is down the hall to your right.

But now, you can add to that a touch of Botox.

The American Society for Aesthetic Plastic Surgery said that in 2013 alone, 385,000 men had undergone this procedure. Last week, the organization said the 2014 numbers also show the number of men having cosmetic surgery continues to rise, though it didn’t yet release the latest Botox numbers. Todd Schlifstein, owner of Fountain Medical Group in New York City, told Men’s Journal that the men coming in for Botox are “middle-aged, health-conscious, white-collar guys” who want to look not just younger, but fresher.

“Since the 2008 meltdown in the economy and the subsequent repurposing of careers and functions, it has been messy on the Street,” New York-based executive coach Roy Cohen said in an interview. “In the process, fear of job loss, diminished prestige and shrinking income have led men to pay closer attention to image and age.”

For men who want to reboot their image but can’t change their wardrobes, getting a little “work” done can yield the desired benefits. Dr. Norman Rowe, a New York City plastic surgeon, told ABC TV that he’s already seeing men come through his office for Botox, specifically asking for a procedure that will provide what he calls “that Wall Street Wrinkle.”

According to Dr. Rowe, this means that these men don’t want their wrinkles eradicated entirely. They just want enough wrinkles removed to give a fresh look to their faces, yet have enough left over to give the impression of a professional who’s been around the block a few times. After all, they don’t want to give the impression that they’re just kids. And besides, they earned those wrinkles.

“They’re battle scars,” he said. “They’re badges of honor, so to speak.”

He added that they’re not just getting Botox treatments for the brows that they furrowed on behalf of their clients. They’re also getting them in the palms of their hands, to eradicate that troublesome sweaty handshake, and in their armpits, to prevent them from sweating through their Turnbull & Asser shirts.

In a release last week, The American Society for Aesthetic Plastic Surgery said that cosmetic procedures have been gaining traction among men for some time now. ASPS President Scot Glasberg, MD said that the idea that these procedures are the sole province of women is one that should be left in a less enlightened past.

“Male plastic surgery rates have significantly increased since 2000 and the notion that cosmetic procedures are just for women no longer exists,” he said. “Men are seeking to regain a more youthful look, improve their self-image and feel better about their appearance.”

Some men of Wall Street are also choosing other, less painful methods to address that not-so-fresh feeling. Diana Melencio, co-founder of the OkMyOutfit shopping service, spent eight years as a Wall Street analyst. She said her company organizes events for the clientele that used to be her male counterparts. In her experience, they’re not just trying to look younger; they’re trying to feel younger by being pampered, just like their female counterparts.

“We have thrown several events for our male clientele, and a ‘beauty’ service that has proven popular with this trend is at-home barbers,” she said. “We’ve hosted events where hot shaves have proven to be quite popular. Among this crowd, other procedures that come to mind include manicures and so-called ‘male’ facials.”

Today’s Wall Street man has good reasons to leave the Gordon Gekko look behind, in favor of something more youthful and vibrant. Thanks to modern cosmetic products and hypodermic needles full of botulinum toxin, he has ways of getting there that will allow him to keep coming to work in his Brooks Brothers suits.