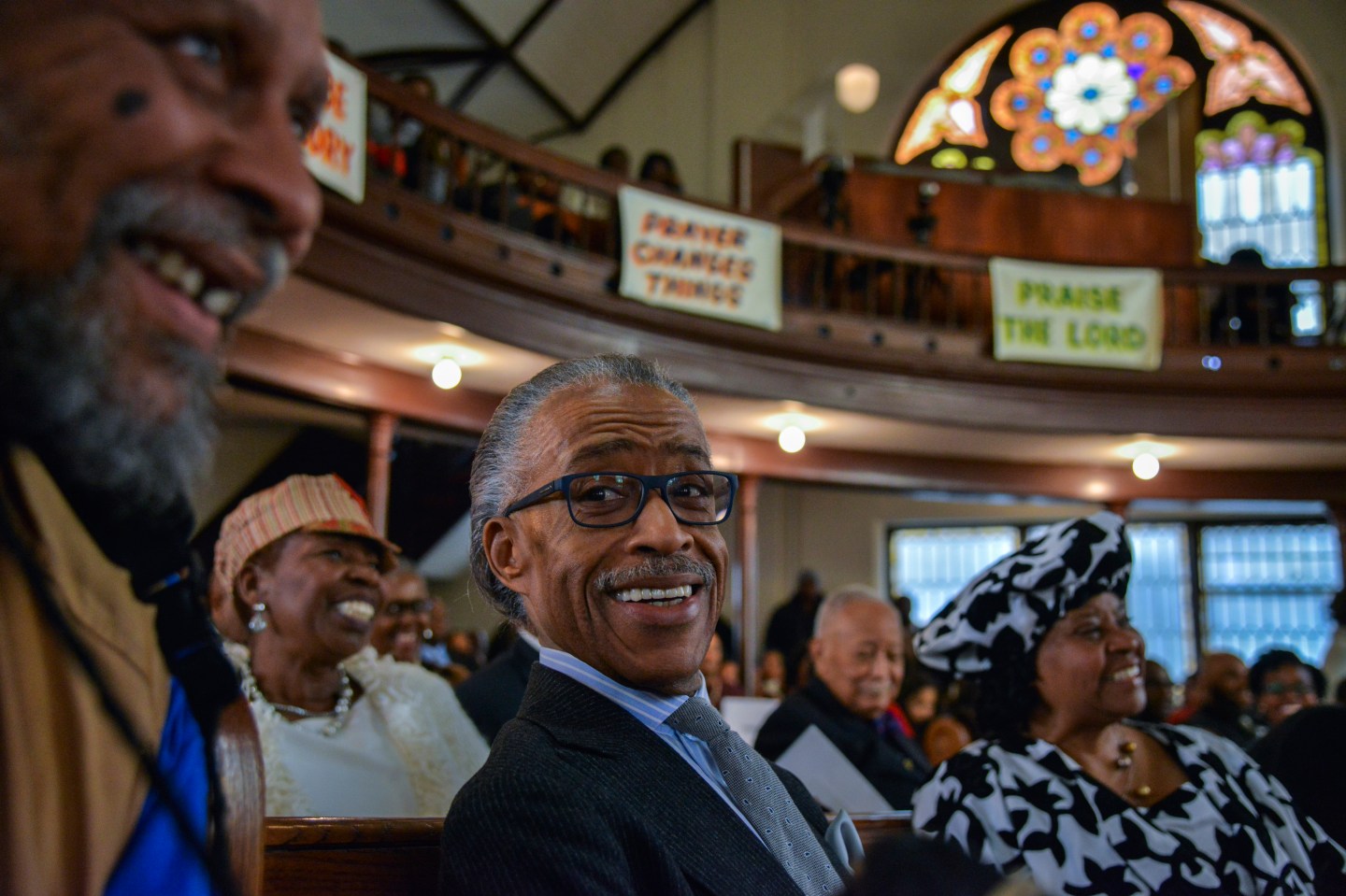 NEW YORK, NY - JANUARY 31: Reverend Al Sharpton grins as he is introduced to give a keynote address for pastor and social activist mentor, Reverend Herbert Daughtry, at the House of Lord Pentecostal Church on Saturday, January 31, 2015, in Brooklyn, NY. In his address, Sharpton praised Daughtry for leading causes for social concern in New York in the mid 1970's. (Photo by Jahi Chikwendiu/The Washington Post via Getty Images)
Photograph by Jahi Chikwendiu — The Washington Post/Getty Images

Comcast Corp (ETB) and Time Warner Cable Inc (TWC) have been sued for $20 billion for allegedly discriminating against African American-owned media and employing advocates such as the NAACP and the Rev. Al Sharpton to advance their bias.

The lawsuit was filed on Friday in Los Angeles federal court by the National Association of African-American Owned Media as U.S. regulators review the proposed $45 billion merger between the two biggest U.S. cable operators.

The same group filed a $10 billion lawsuit in December against AT&T Inc (T) and DirecTV (DTV), whose own proposed merger is also under regulatory review.

According to the complaint, Comcast entered into “memoranda of understanding” with Sharpton, the NAACP and other advocacy groups to provide large cash “donations” in exchange for their not interfering with its alleged refusal to contract with African-American-owned media.

The complaint said the agreements were struck after Comcast was criticized for similar failures in 2010 when it was buying part of entertainment company NBC Universal, which it now fully owns.

Sharpton and his National Action Network, the complaint said, allegedly received “over $3.8 million in ‘donations’ and as salary” for his work as an MSNBC host.

The complaint also said Comcast and Time Warner Cable each have only one fully African American-owned channel, the Africa Channel, and that Time Warner Cable has acquiesced in Comcast’s discrimination in anticipation of the merger’s completion.

A Comcast spokeswoman called the lawsuit “frivolous,” saying it followed the Philadelphia-based company’s good faith negotiations with the plaintiff over many years.

“We do not generally comment on pending litigation, but this complaint represents nothing more than a string of inflammatory, inaccurate, and unsupported allegations,” she said.

A Time Warner Cable spokeswoman declined to discuss the lawsuit, but said the New York-based company and Comcast remain separate, “including with respect to programming decisions.”

Sharpton also rejected the allegations, saying they could support defamation counterclaims, and that his group has received less than $1 million from Comcast.

“The lawsuit is the epitome of an insult to the black community” and has “not one scintilla of evidence,” Sharpton said in a phone interview.

The NAACP did not immediately respond to requests for comment.