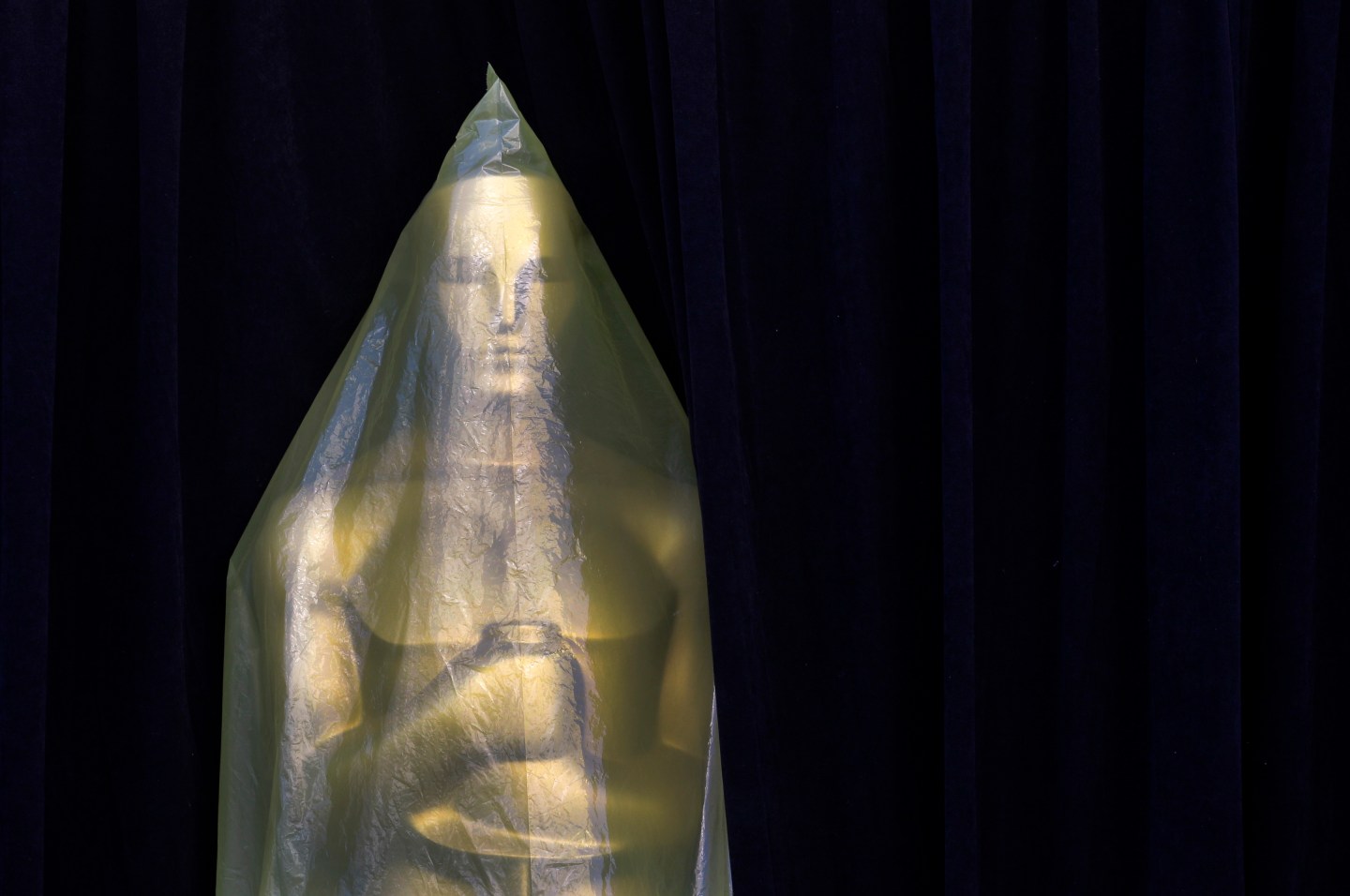 Covered in plastic, an Oscar statue peeks out from a curtain on the red carpet as preparations for the 84th Academy Awards continue in Los Angeles on Friday, Feb. 24, 2012.  The Oscars will be held on Sunday. (AP Photo/Amy Sancetta)
Photograph by Amy Sancetta — AP

The Oscars are big business in Hollywood: The L.A. economy rakes in an estimated $130 million thanks to the Academy of Motion Picture Arts and Sciences’ yearly hubbub. And Best Picture winners take in an extra $14 million, on average, at the box office after a victory. But what would nabbing a statue on Sunday do for individual stars’ bottom lines, besides adding a $400 hunk of gold-plated pewter to their list of assets?

Speaking strictly financially, the benefits can vary widely. Agents and managers report using Oscar wins to leverage as much as a 20% bump in asking price on major films. But there are many confounding factors. Budgets vary tremendously depending on production size, and bigger productions don’t often offer the best roles. There may be gender differences, too, according to one study, done by a Colgate grad student, which found that actors can earn as much as 83 percent higher on their first post-Oscar movie (perhaps because they take bigger-budget jobs after taking the salary cut necessary for an awards-bait indie). Actresses, the same study found, see no benefits, and sometimes take a salary hit (a phenomenon that could be due to Hollywood ageism, rather than directly linked to the win).

The fact is that Hollywood producers know there’s no correlation between hiring an Oscar-winning star and making big bucks on a film, according to several studies over the last 15 years by S. Abraham Ravid, a professor of finance at Yeshiva University. “It almost never works out that having an Academy Award winner in a film made any difference,” Ravid says. “It’s probably nice for them to win, but it’s not necessarily good for anyone to hire them.”

That said, in a time of diminishing movie-star power, an Oscar win can result in career benefits beyond the bottom line. It can burnish name recognition, signal a comeback, or solidify an actor’s transition into a more serious phase—all of which result in more and better choices for stars. Here, those whose stock could particularly rise with a win:

Up for: Best Supporting Actress, Boyhood

Despite a long Hollywood career, Arquette is up for her first Oscar for her naturalistic performance as a single, working mom in Boyhood. She also put 12 years of her life into the role and aged on screen—something all of her costars did, too, but an idea that would strike fear, alas, into many other actresses. (The industry’s fault, not theirs, but fear is fear.) The good news: Arquette has picked up incredible momentum throughout awards season and looks like a favorite for the Oscar. The win could take her from perpetual TV crime-solver to solid A-lister. (Though she’ll still be starring on CBS’ newest CSI starting next month. Hey, steady paychecks are a good thing.)

Up for: Best Actor, Foxcatcher

He drastically transformed his look (with a prosthetic brow) to play John DuPont, an oddball millionaire who hosts an Olympic wrestler’s training at his estate. And while it’s not the massive weight-loss or major uglification that many Oscar hopefuls endure on their way to awards season, it could help convert him in audiences’ eyes from nice-guy comedian to serious actor. While his post-Office film career has been fruitful, he hasn’t had a chance at many meaty dramatic roles—something an Oscar would definitely change.

Up for: Best Supporting Actor, Boyhood

He’s been nominated three other times since 2002: for his contributions to the screenplays for Before Midnight and Before Sunset, and for his performance in Training Day. But Boyhood, shot over 13 years with his frequent collaborator Richard Linklater, is a special movie. A victory for it in any category will show the relevance of unique indie films, and making Ethan Hawke into an Oscar-winner could send him on a Matthew McConaughey-like trajectory toward a mid-career renaissance.

Up for: Best Actress, The Theory of Everything

As Stephen Hawking’s encouraging wife, Jane, Jones broke through to worldwide name recognition—an Oscar win would make that stick. She began her career as a teen in the British radio soap The Archers. (Yes, this was in modern times; she’s only 31.) She’ll compete in the category against fellow Brit Rosamund Pike, who could also see a considerable career bump from a win.

Up for: Best Actress, Gone Girl

Pike’s is the only nomination for the wildly popular mystery film (based on the wildly popular novel) about a woman whose disappearance casts suspicion on her husband. A win could cement Pike’s status as more than just a pretty British face in a populist movie. But she’s got to contend with the fierce Reese Witherspoon—who turned in a gritty, vanity-free performance in Wild—and perennial favorite Julianne Moore.

Up for: Best Actor, The Theory of Everything

Redmayne’s career has taken off considerably just from being cast as Hawking. Before The Theory of Everything, he was known only as some vaguely familiar British guy who was in My Week With Marilyn and Les Miserables. The nomination itself has upped his stock considerably, and it’s hard to resist a guy playing one of our most beloved, inspiring living geniuses. But a win would solidify his star status instead of making him just one more also-ran. He’s had great momentum this awards season with Golden Globe, SAG, and Hollywood Film Award wins. Some worry his campy Jupiter Ascending role could wreck his chances, though, opening the door to a win by Bradley Cooper (American Sniper) or Michael Keaton (Birdman).

Up for: Best Supporting Actor, Foxcatcher

He was nominated in the same category in 2011 for The Kids Are All Right, but like Carell, he, too, looks almost unrecognizable in his Foxcatcher role (as an Olympic champion wrestler). A win for him would largely be an acknowledgement of his MVP status in movies in general: Here’s a guy who can go from 13 Going on 30 to The Avengers to Foxcatcher and many, many in between. And his chances are looking good, with the strongest competition coming from J.K. Simmons (whose riveting performance in Whiplash is quite deserving).

Up for: Best Supporting Actress, Birdman

Arquette or Laura Dern (for Wild) will likely take this one home, but it’s nice to see everyone’s favorite adorable smartass in the mix for her role as Michael Keaton’s adorable smartass daughter in Birdman. Stone’s one of the few bonafide, recognizable, bankable young stars working in movies today, but an Oscar would put her in the Jennifer Lawrence zone where respectability and likability mingle at the headiest heights. Presumably the Oscar censors will be on high alert if Stone ends up at the podium, given the bleep-ability of her released statement when she was nominated.